Aaaa-ROO! Who's a Good Doggy?

Finished the shields for my wolf riders today and got them under some better light for better pictures. 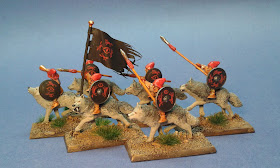 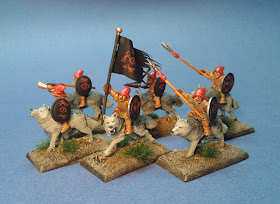 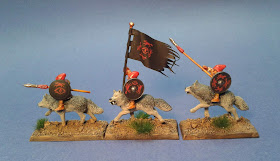 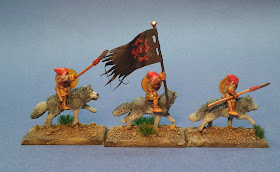 I decided on the red hoods because of a vague memory of a goblin in folk lore named Red Cap. Also Sauron seems to like wolves so these guys get a somewhat elite status (and well deserved from their first outing- see previous post).
I also wanted a spiffy flag for them other than yet another Red Eye. Thinking of Late Roman shields I hit on the idea of red wolves leaping around The Eye and then carried those motifs onto the shields.
I got the figures second hand from a chap on Lead Adventure Forum and Pete picked them up when visiting his parents this year. They came with little square wicker shields that I don't like, so I replaced them with some plastic shields from Victrix German and Numidian infantry. The original owner had already based them and did a nice job with putty and sand. Easy enough to quickly paint, drybrush and add a few tufts.
I've also heard on the interweb that the Vendel fantasy range has been sold to some one in the U.S. so hopefully it will be in production and up for sale again soon.
In Dragon Rampant I'm classing these as Light Riders with short range missiles for 3 points.