This past weekend the Mad Padre and I were finally able to get together for our first Thundering Dice weekend of the year. So I packed up my legions of Angmar (including a shiny new unit of wolf riders who had some shields added the night before the trip) and took a scenic drive up to Barrie.
Tea was made. Burgers were grilled. Wine was drunk. Indian take out was eaten. Dice were rolled. So generally a Good Time was had by all.
First up was our usual Dragon Rampant grudge match for who held onto Smoochie, plush Dragon of Mordor. The Padre is transitioning to new digs, so we used the dinner table and only fielded 60 point forces on some basic terrain.
My wolf riders performed admirably in their first outing. They got annihilated of course (the New Unit rule naturally), but they skirmished aggressively all game and were generally annoying to the Riders of Rohan while passing all of their courage tests. The last wolf rider, instead of evading a charge by Theoden and his elite riders, stood his ground to protect the flank of some goblins.
On the other flank, I did drive off the Padre's head-hunting elf maiden skirmish units but Aragorn and an ent charged in and sent trolls and goblins running. Pippin and some Gondor foot fought me off in the centre. Rohirrim charging everywhere. It was a disaster.  I'm going to have to rethink my Order of Battle a bit.
Some pictures : 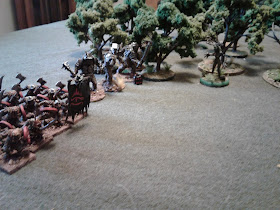 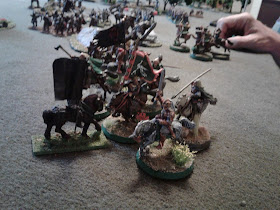 After dinner was trying a new board game, which seemed to involve my space ships getting lost in hazardous regions of space and trying to build colonies.
Sunday, after a satisfying fry up and chin wag at a local diner, we settled upon Sharp Practice . We found his ACW terrain, but no figures or tokens, so we got out his long neglected SYW armies instead and used numbered slips of paper to draw out of a hat.
The Padre commanded the Russians and I took the Turks, making up things as we went along. I had twice the cavalry but the Russians had twice the infantry.

I had trouble getting elbow room and ended up fighting the Russians piecemeal. My light cavalry initially bundled the Russian dragoons and hussars back with some losses, but then got blasted away by some volleys from the musketeers. The sipahis attacked and again got blasted losing their Big Man. Axe wielding levy troops fought Grenadiers in the wood with the expected outcome. The Janissaries finally managed to finally get their front clear of trees and cavalry to start shooting at the Russian infantry but by this time they were outnumbered in the firefight (the Russian infantry having dealt with every other target) and their heavy gun never got into it. So my Force Morale was down to 1 and it was time for some lunch and the journey home.