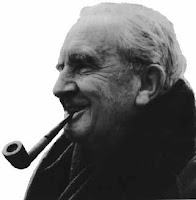 I'm going to nail my colours to the mast and declare that in my opinion J.R.R. Tolkien is THE GREATEST writer of the of the 20th century. For scope of vision, technical craftsmanship, ability to sketch characters and landscapes with breathtaking skill (and sometimes great economy), his nuanced control and manipulation of narrative voice and his massive impact upon later writers and readers makes him more important to 20th century literature than other greats like Dylan Thomas, Faulkner or T.S. Eliot. I'll challenge any dissenting opinion to a steel cage fight.

I like a lot of different styles of fiction although I'm reading less Science Fiction and Fantasy these days and more detective fiction. I think because I'm older and the main thrust of most SF/Fantasy fiction seems to be adolescent wish fulfillment for adventure, whereas detective novels are much more concerned with restoring the world to order. Or perhaps it's just the precocious heroic youths in these novels that bugs me. I rather like George R. R. Martins Fire and Ice series, but sometimes I think his child characters are too clever for the age they're supposed to be. If he'd made them all about 10 years older it might be better. Consequently, noir detective fiction like Raymond Chandler and Dashiell Hammett, or the more modern Amos Walker stories by Loren D. Estleman and Robert B. Parker's Spenser novels have a stronger appeal.

To me, a good novel is one I can reread and still enjoy. I just like how the author uses the words, so I appreciate the activity of reading even though I know how the story will end. Well written prose just grabs my frontal lobes and massages them like a large breasted woman. Consequently I keep coming back to Tolkien's Middle Earth. I've been reading his novels since my sister introduced them to me at the tender age of 10 or 11. I've reread them regularly ever since. It's a ritual I have every few years to start with The Silmarillion, and then have a light break with Bilbo in The Hobbit and then move onto The Lord of the Rings. Every time I read them I get something new out of them or appreciate another well-turned phrase. After that I'll go and rewatch Peter Jackson's movies.

Many people can't stand The Silmarillion, but they don't get it. It's not a light adventure like The Hobbit. It is Tolkien's creation myth that sets the scene for the events of Lord of the Rings. Obviously the scope of action and cast of characters is going to be a lot larger. Of course I liked to read Homer and Malory and Norse sagas in my university days, so I like the epic chronicle narrative style that he uses. The epic sweep of the tales is quite thrilling but also his sense of small events leading to great events and how the doom of the world can rotate upon an ill-concieved oath, or putting a ring into a pocket. Even though I know how it ends I still get choked up over the story of Beren and Luthien.

Middle Earth is for me a bit of a comfy blanket. I like the moral order and find reassurance in noble characters struggling against a rising darkness without hope or the promise of glory. They just do it because it's the right thing to do and keep faith that the sun will rise and victory will come unlooked for.
Posted by James at 9:40 AM