Since Mike has loaned me his camera for the weekend I'm getting caught up on some picture taking. Here are a few more pieces from my fuedal army that I blogged about here.
﻿﻿ 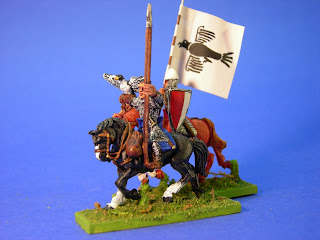 But it looked kinda dumb and flat unless you were going to make a diorama. So my terribly talented friend Dan took him away and converted him to have the falcon on his outstretched arm which mirrors the bird of prey banner that he uses.

Giving moral support to the Good Duke are a bishop and abbess. Both are Reaper miniatures. I've tried to show the illuminations I painted in the book the Abbess is reading from, but one can only zoom in so close. 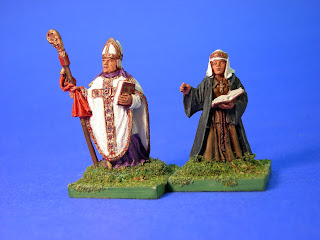 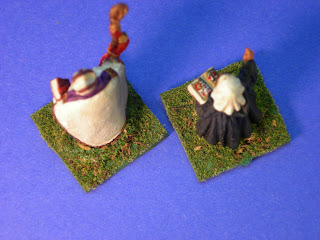 Of course, Fulk is getting some otherworldly support too: 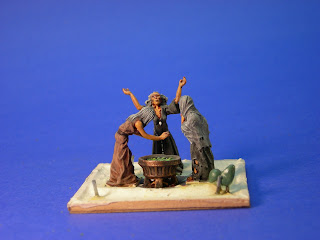 I'm trying to add some toadstools and a big standing stone to the base too. I'm not sure who makes these lovelies. Reaper I think.
Some more characters and command figures with their personal banners:

Finally some more infantry. First up a bag of OG unarmoured Norman spearmen with an extra Foundry foot sergeant to lead them. I replaced the spear held by one to give him a flag. I thought the boar was suitably ferocious, yet ignoble. 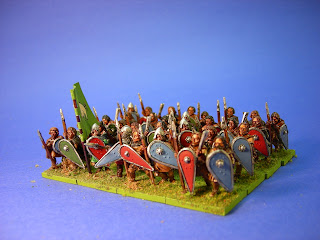 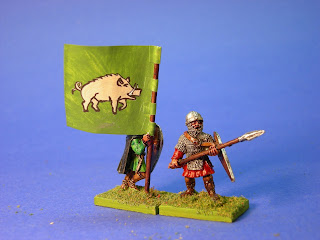 Lastly, one of my companies of OG armoured Crusades infantry. I've got three 20 figure companies of these fellows. 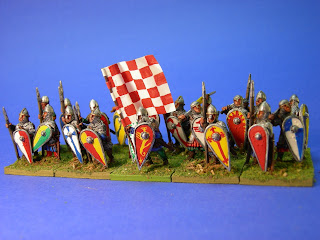