This past week we've had my sister-in-law, The Great Knitting Guru of the East, her two boys and my oldest daughter (who has been working at an engineering student job all summer out there) down from the Atlantic provinces for a visit. We haven't seen each other for about 8 years, but I've heard wondrous rumours that somewhere out in the Maritimes, I had two young (11 and 15) relatives who liked to war game! Mostly 40K and Lord of the Rings and a bit of Wings of War, but still they liked small military miniatures. Naturally I passed along my old 1/72nd scale plastic figures and anything else I thought they'd take a fancy to.

I think I was the most excited of anyone about the visit and had been looking forward to showing off my figures all summer.

OK, seeing my daughter was pretty cool too.

Naturally as soon as they arrived and we'd had a cup of tea and caught up, the boys had to see the Man Cave. I spent the rest of the evening touring through my large and varied collection of figures and terrain. The youngest was particularly interested in how to make his own terrain since the Games Workshop stuff does put a dent in the allowance money! I forgot to warn my sister-in-law that he may start hording strange things like card board, fish tank gravel and weird bits of stuff that look interesting, plus putting in requests for other weird things like a big sheet of felt and 'Gorilla Glue'.

He took a special shine to my WW2 collection.

The next day I had to go down to ASU London to get my Canadian Forces ID (the picture is way nicer than my Driver's Licence) so I took the boys along and we toured the RCR Museum that is on the base. After lunch we then toured the hobby shops in London. Since I thought the young lad was keen on getting some terrain I took him to a very nice model RR shop that has a terrific selection of Woodland Scenics supplies. But when we got there I could tell the spending money was burning a hole in his pocket and he wanted some miniatures. So we went back downtown to Imperial Hobbies which has a not bad selection of Battlefront minis.

After much pondering he selected a platoon of German Panzer Grenadiers in great coats. That afternoon we got them scraped and primed and I think after dinner he had started painting. I usually let my primer set for 24 hours myself, but I remember being young and impatient. I was checking on his work and it`s pretty good. Much tidier than my painting was at that age!

So they had to spend a few nights with the grand parents which gave us a bit of a rest and gave me time to clean off the gaming table. I had asked my friend Pasha Dan to run a Pulp adventure game for us on Saturday night. I thought that would be silly good fun and something very different from what the boys were used too. Patrick, Barry and Mike joined us for a game of silly hats, shifting alliances and lots of bad jokes (so a typical club night!). It was mighty victory for the people of Morowi though, as the Belgians, Germans and Big Game Hunters all got annihilated between the Arab slavers, the head hunters and the cannibals. I told the youngster to flee while he could, but he tried to fight it out and got surrounded. I think the boys had fun anyway.

Sunday had no agenda so I set up a WW2 game for the youngster as well. I briefly thought about using Flames of War but I haven`t played those rules in so long it`d be a lot of work to teach myself let alone the nephew. So I went with a slimmed down version of I Ain`t Been Shot Mum by Too Fat Lardies. I`d been wanting to run this scenario for about a year, ever since I got my first platoon of German Fallschirmjaegers done.

It`s early in 1945, the front has collapsed and 4thCanadian Armoured Division has formed some mobile columns to break through, exploit the German confusion and make some big advances. One column is trying to bounce a bridge over the a canal and capture it intact, otherwise the canal will give the Germans a major defensive obstacle and buy them time to regroup. 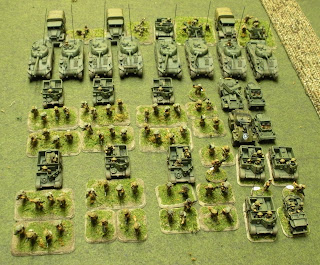 2x troops of Shermans, 2x platoons of infantry riding in Bren Carriers, a platoon of armoured cars, 2x 6 pounders, a pair of upgunned Carriers from the Carrier platoon and 2x Vickers MMG teams. There were also random flights of fighter bombers roaming over the front. This was the first game for the armoured cars, the trucks and I think the Vickers MMG teams and 6 pounders. 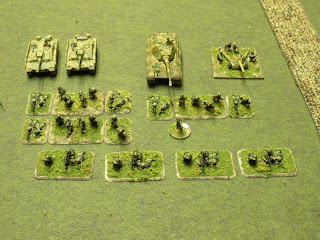 A platoon of FJ with 2x MG42s, panzerfausts and lots of automatic weapons in each section, an MG42 platoon, a Pak 40, a King Tiger and 2 StuG IIIs. this was the first time out for all of these models!

The table from the Canadian start line: 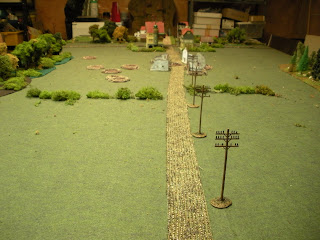 The Germans could set up anywhere and didn`t have to keep the platoon together. All units started hidden. My young opponent had no idea what I had or where it was.

``That`s not fair`` says the young lad thinking this was 40K and we had somewhat equal points.

Here`s a map I drew using the computer`s Paint program, with the deployments as I remember them mid-game: 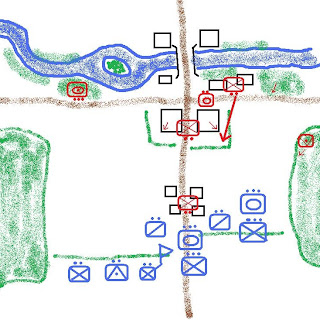 Blue for Canadians, red for Germans. I hope you remember your tactical signs. The MG42s are indicated by the small red arrows.

The young lad is extremely cautious and everything hides behind the hedge. He`s so far away that his spotting rolls are atrocious. Finally he starts to creep down the road and the pak40 opens up, scoring first blood: 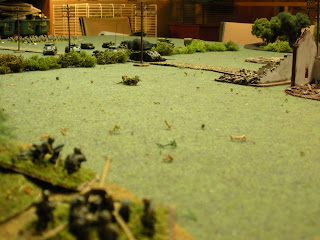 Another shot took out the gun on one of the Fireflies causing it to retire from the fight. But this drew the inevitable response. After a few rounds of HE from the Shermans, a Jabo showed up: 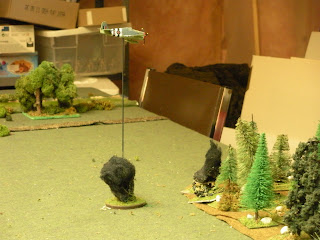 The MG42 team booked it out of there and got back to the town to shore up the defences.
Eventually the Canadians pushed far enough up the road that the paras in the ruins opened fire, whizzing a panzerfaust over the head of the lead tank commander! The Canadians responded with fury, machineguns from the Carrier patrol and armoured car patrols joining the HE rounds from the Shermans to whittle the Germans down before they could take any more effective action.

On the German right the StuGs opened fire, trying to pin the advance of the Canadian left. They disabled a carrier and drew a lot of fire from one of the 6 pounders. The other 6 pounder started hammering the hotel with HE to considerable effect. 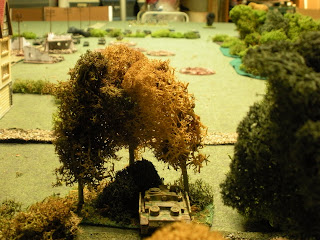 So one troops of Shermans and one platoon of infantry came up the road. The other troop and infantry platoon came through the fields to the right. The armoured cars swung to the right as well. I shift my reserve section to the garden of the Bierhaus and put the two MG42 teams along the road.

Time to unmask my ace in the hole! The King Tiger rolls out from behind the Bierhaus and engages the right hand troop. It misses. 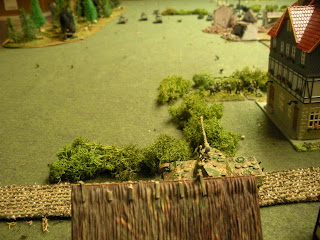 The Canadian tank troops gets the next card and fires a return volley. It`s long range. He hits. I have 14 armour dice, his 75mm guns only roll 6. He scores 5 (FIVE!) hits and I only save one! My shiny new King Tiger gets brewed up, much to my nephew`s delight: 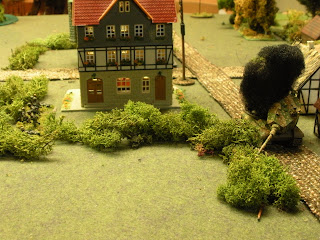 One of my StuGs got taken out soon after. The second StuG tried to relocate to the other flank to engage the Shermans but it attracted the attention of another fighter bomber: 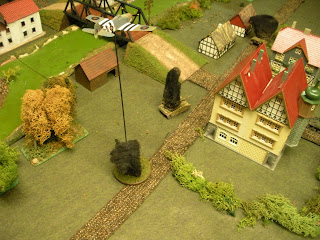 By this time the Canadian attack was developing nicely and I was getting worried. The section in the hotel was wiped out by HE from the 6 pounders. My front was being held by one section (also taking casualties) 4x MG42 teams and the platoon leader. I was just hoping the sappers could blow the damn bridge soon ( I rolled dice for it every Tea Break card). 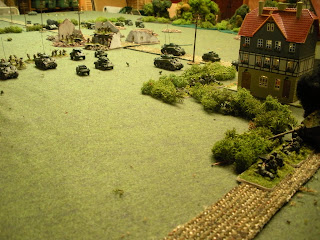 The Canadian infantry were hanging back behind the armour, but I managed to chop up a few infantry sections with MG fire. Meanwhile the platoon commander was firing panzerfausts out of the hotel windows at the advancing Shermans.

One Sherman got brewed up: 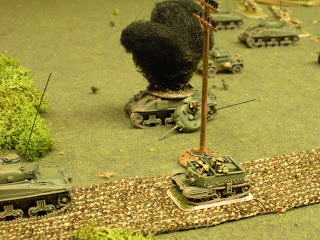 The second carrier from the Carrier Platoon, following the lead Sherman into town took a lot of fire from the MG42 in the hotel, disabling it`s .50 cal. The leading Sherman entered the town and took a panzerfaust rocket to the tracks. 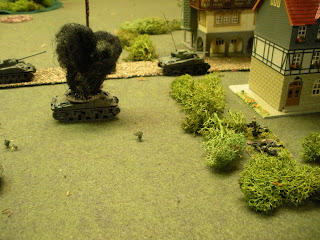 But things were getting bleak. The paras in the beer garden were all dead by now. Cut down under a hail of fire from the armoured cars and a troop of Sherman tanks. There wasn`t a lot between the Canadians and the bridge anymore.

Finally I rolled a 6, blowing the bridge and the remains of my shattered command retreated from the town to get back across the canal.

I lost the King Tiger, 2x StuGs, the pak40 and 24 men. The Canadians lost 2x Shermans brewed up, 2x damaged, 2x carriers damaged and I think 8 KIAs in the infantry.

I thought I was going a bit over the top putting the King Tiger in the game. I`d forgotten how experience and superior tactics are no match to a youngster`s die rolling!

Actually his tactics weren`t too bad either, if somewhat cautious.

But now they`re heading back home, nephews with old copies of White Dwarf and some extra figures from my spares box. Hopefully they`ll come back next summer; I have more armies that they haven`t played with yet!
Posted by James at 12:44 PM