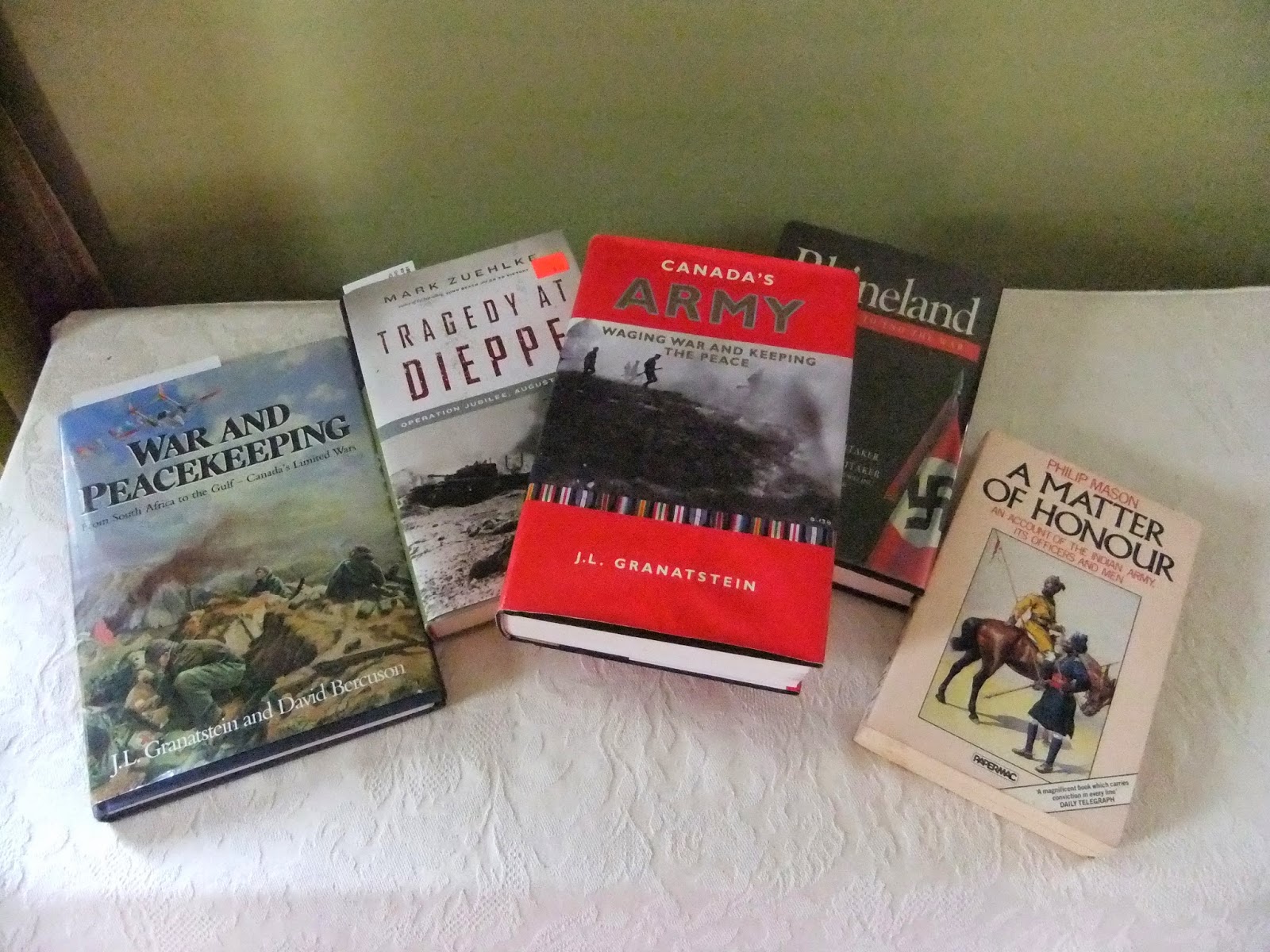 I have been expanding my knowledge of my favourite institution, the Canadian Army, this summer.
For my birthday, my friend The Mad Padre gave me a book from his library, which his father Lt Col. Peterson had owned before him; Canada's Army, Waging War and Keeping the Peace by J.L. Granatstein. This book came out in 2002, just after 9/11 and before the deployments and combat operations to Afghanistan started. He explores the 'Militia Myth' (Canadian pluck and ingenuity, plus a citizen soldiery will defend us, why do we need a defence budget?) which has ham-strung the Canadian Army through most of the 20th century and the cycles of enter a war, mobilize and build up out of nothing, learn professional soldiering the hard way, become a top quality fighting army that earns the respect of it's allies and then dismantle it all when the fighting is over, only to have to do it all over again with the next war. The final chapter covering 1968 to 2001, with it's budget cuts, unification and the failed peacekeeping missions of the 1990s was probably more depressing than the chapters on World War One.
Then when I took Mrs. Rabbitman shopping in London, I found Rhineland by Dennis Whitaker and War and Peacekeeping; From South Africa to the Gulf- Canada's Small Wars (1991) also by Granatstein, in hard cover, for $4.00 each at a charity shop. War and Peacekeeping has pretty good chapters covering the Riel Rebellion of 1885 and the South African War, plus a lot about the Korean War which I hadn't yet read much about. But I was quite amused to read about a raid on Hill 113 lead by a Lt. A. A.S. Peterson of the RCR, the Mad Padre's own father, who won the MC for the action and told his son "My CO chased me up the hill and the Chinese chased me back down." But from the three whole paragraphs devoted to the action, I got the impression it was a bad fight and Lt. Peterson was lucky to get all his men back out of it. I haven't gotten to the chapters on Cold War era peace support operations.
I haven't gotten to Rhineland yet, covering 1st Canadian Army's participation in the allied efforts to break into Germany. But I read it about 10 years ago and it's worth adding to my library.
Tragedy at Dieppe is the latest book by Mark Zuehlke. I haven't read very much about Dieppe at all, since it really wasn't strategically significant and was quite a disaster. But I saw it in hard cover for $6.99 and thought I should fill in that gap in my knowledge of a battle which is important to Canada psychologically.
A Matter of Honour, An Account of The Indian Army, It's Officers and Men by Philip Mason (1974) was given to me by a friend clearing out some room from his shelves. Most of my reading about the Indian Army has focused on the classic Victorian age army portrayed by Kipling. But this book covers that famed institution from the first company of mercenaries hired to protect East Indian Company warehouses until the tragedy of partition in 1947. The authour is a former Indian Civil Servant and he explores why exactly an army of mercenaries should give such long, honourable and extremely loyal service to a group of foreigners. The peculiarities of the British officer class are explained a lot by the complex relationship between white, Christian English officers and the Hindu, Sikh or Muslim Indian soldiers. I found it quite fascinating to read about the early campaigns of John Company and then later on during WW1 and WW2 as the Indian Army grew in national identity.
Since all of these books have been too big to fit in my lunch pail, at work I've been reading some more Bernie Gunther novels by Philip Kerr. Hard boiled detective fiction meets Nazi Germany. Highly recommended.