Another Saturday Night on the Road to Moscow

Last night I had my last game for a long time with the Mad Padre. Since he's getting posted to CFB Borden next month it was a bit of farewell game (Mrs. Rabbitman made sure we had chips and dip to go with the beer) and Mike got to choose what we played.

He opted to break out some of the 15mm Soviets he'd recently bought and play Scenario 1 from the Vyazma or Bust campaign supplement.

The game requires a German force with 2 platoons of infantry, a platoon of Panzer IIIs and a weapons platoon to clear a stretch of highway weaving through some woods to a bridge. I used every tree I own and fleshed things out with my box of lichen but things still looked sparse. Ironically we ended up dong all of our fighting in one half of the table!

Patrick and I opted to throw the Panzers and Panzer Grenadiers straight at the bridge while the truck born infantry and support platoon cleared the woods in the middle.

This threw us right into the bulk of the Russian defenders, which included a KV1 and a pair of 45mm AT guns in enfilade across the river.

The Panzer Grenadiers stormed a house taking out a Maxim gun, but then got shredded. The Panzer IIIs were getting badly hurt trying to take on the KV. Stukas arrived with a gratifying frequency but didn't have much effect. 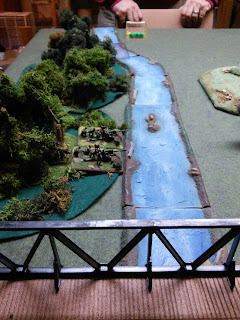 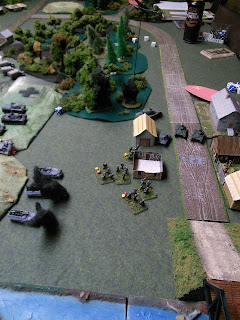 Notice how few Panzer Grenadiers there are and they had a lot of shock on them and had lost their platoon commander. By this time one of our Panzers had had it's gun knocked out and shock was piling up on a couple of others. We just couldn't put enough damage on the big KV fast enough and the 45mm gun on the T26 isn't to be sneezed at when you're in an early model PzIII! So it was time to withdraw.

Fun times though and I avoided a hangover this morning. But with the Padre moving away my gaming is probably going to get very quiet for the rest of the summer. But we have hopes that once he's settled we can visit each other for overnight gaming events (assuming that is I manage to get a job with weekends off).
Posted by James at 9:08 AM