This past weekend I also received my portion of the order of figures from Sergeant Major Miniatures that I'd made with the Mad Padre. These are the old Vendel Fantasy figures, now being sold under the Bloody Day name at SMM.

I wasn't sure really which way to go. Order some of everything? Or order a complete force for one race?

I eventually decided on a compromise of sorts. For the elves some armoured up Noldor to reinforce Naleth (aka Elf Girl) the Wise and Stone Bark (aka Tree Man). A pack of 4 armoured spearmen and the Elf king pack will give me a unit of elite foot and two heroes (reduced figure elite foot with magical weapons). 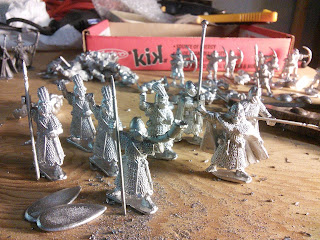 Also for the Good Guys I opted for a small contingent of Dwarves from Khazad-Dum. A pack of 8 heavily armoured huscarl and a pack of 5 dwarf Lords will give me two units of elite foot and a hero all with two handed weapons and long mail hauberks. 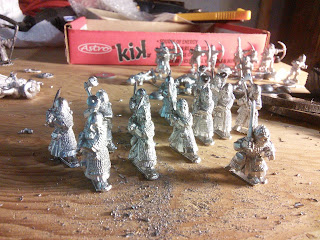 Finally to add to the Legions of Angmar I ordered two 8 packs of small orcs attacking and an 8 pack of small orc archers. These will form two units of light foot with bows. A pack of 4 trolls will be a reduced figure unit of bellicose foot. 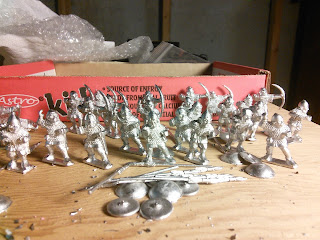 Being older models there is some light flash along the mould lines. Spear armed troops have separate spears and shields. The inclusion of spears makes me happy. Open handed there is the easy option to use wire spears if you choose. But suitable wire or purpose made wire spears are harder to find than you'd think, so at least your figure comes with a weapon. I HATE buying spearmen and then having to source the spears separately. It would be like buying riflemen and having to buy the rifles separately. I decided that my Elven King would look better waving a sword so I found one in my bits box. One orc was sporting a very 80s mohawk which I trimmed off.

The poses are all a bit stiff, but the details are well done. The dwarves are in very Anglo-Saxon style armour and the Lords have more ornate helmets with face masks.

The elves look quite believable. Not the wasp waisted effeminate mincers that seem popular. These figures look like mighty Noldor who could inspire terror in the hearts of the servants of evil.

The orcs don't look ridiculous and cartoony like WFB orcs. They are wearing mail shirts, pants and boots as described in Lord of the Rings. Half of them are sporting a nice variety of helmets without gratuitous spikes or horns or skullz.

The trolls are a bit disappointing, being only a bit  bigger than the Elf warriors. But they are at least muscular and savage looking unlike the spindly stupid nose pickers inspired by D&D one can find on the market. Three of them have shields with faces stuck on. Because of the high relief, I assume these are meant to be the actual faces of defeated enemies adorning the shields. 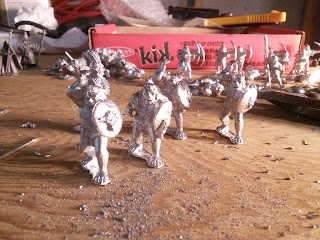 Overall I am quite pleased. And for 2 bucks a figure the price isn't horrible. Once I get these painted and on the table I'll have to see what else I need; wolf riders, bigger uruks/hobgoblins, more elves and dwarves surely?

Now I have to decide on badges etc.
Posted by James at 9:55 AM