Finished the next contingent of Dwarves this weekend. 8 huscarls and the Dwarf King with guards will give me two more 6 figure units of elite foot and another hero.

The king came with 3 spear carrying guards. Since that isn't enough for a shield wall I turned them into flag carriers.

The Royal Standard is from the door to Moria as depicted in The Fellowship of the Ring: 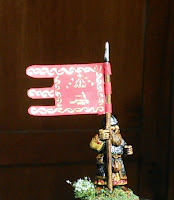 This one is a mix of the Bear of Berne, Viking standards and Celtic bears: 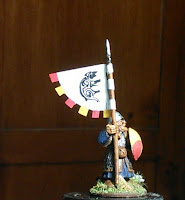 This one is supposed to be a Celtic dragon biting its tail: 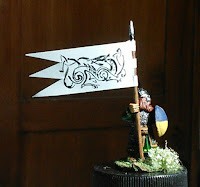 Pinterest was very useful for searching for graphic inspiration for the above. I like the intricacies of Celtic inspired art, and I think that would appeal to Dwarven craftsmen too.

One of the standard bearers gave up his shield for my hero with the shiny sword. His stance and one handed grip just made me feel he should have a shield too. 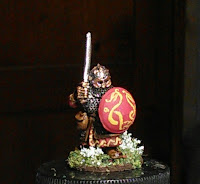 Being a hero, he gets an elaborate shield design.

Here is my Dwarf King: 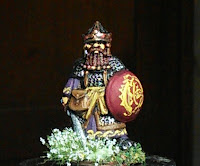 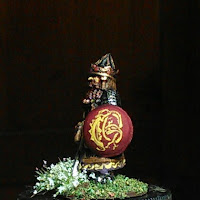 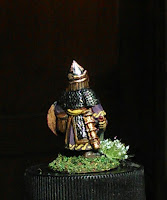 This completes Wave 2. This also brings the dwarves up to a decent strength; four units of elite foot and two heroes. Tooling up the heroes with magic armour and enchanted weapons would take the dwarves up to 44 points.

I would like to add some spear armed shield wall troops and some bow armed scouts to round them out.
Posted by James at 10:07 PM