William Hupp, the owner of Thistle and Rose Miniatures, has bought the Vendel Miniatures range and now has them for sale.

He was going to come to Hotlead and bring figures for me. When that was cancelled we worked out a mail order deal. The box arrived Tuesday and all my hobby time since has been spent getting them scraped and ready to prime.

So Mordor gets some reinforcements; another unit of wolf riders and two packs of wolves. I've counted eight different wolf poses! 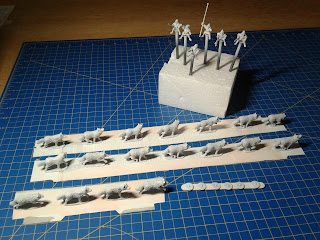 I'm breaking my usual habit and this time am going to paint riders separate from mounts because I recall trying to paint the wolves last time was quite tricky with the goblins already on. Also going to paint shields separate so I don't find them in the way when I seat the riders.

Two bags of goblin archers and two bags of goblin spears.  I asked for round shields because I don't like the square wicker ones. This will give me 2 companies of dubious cheap ecpendable troops, and a few spares to crew siege engines or supply wagons. 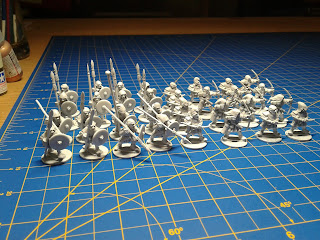 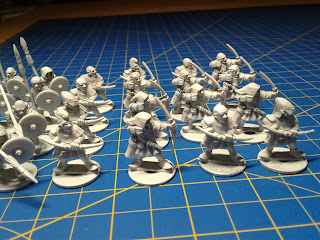 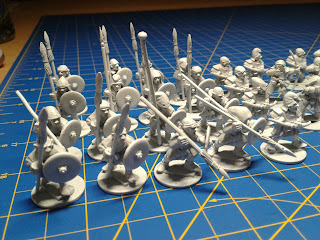 I love the hoods!

Finally the elves get some cavalry. Two squadrons. These are technically "Men of the West Cavalry" but they have similar armour, helmet and plumes plus they have cloaks and a bit more animation than the "High Elf Cavalry". If both codes had been sold in bags of 3, I might have mixed and matched and done a squadron of each. But the elf cavalry comes in bags of 4.

Math, it does affect purchases. 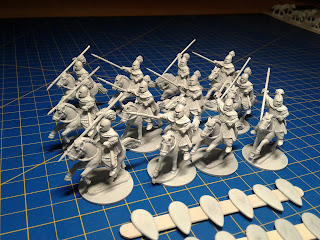 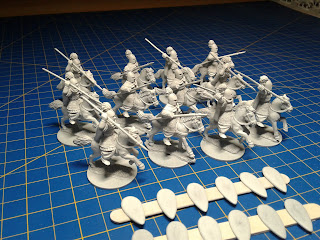