The Battle of Goatpakhora Station

The following was a thoroughly enjoyable game we had using the Black Powder rules. Peter brought over his 28mm Russian VSF army and we replaced the steamtech elements with Pathan auxiliaries from my collection. Peter, Mike and Dave ran the Tsarist hordes, while Pasha Dan, Robin and myself directed the forces of the Raj.

There I was at the end of a beastly hot day of watching the Sikhs at drill and listening to Major Jeeves report on the boot inventory, relaxing under the punkah in the Mess and getting on the outside of a very tall G&T when my old school chum, Lionel Saint-John Chalmers-Price comes beetling in, looking decidedly worried. But Budgie is one of those Politcal-wallahs and they are always worried. Seeing dacoits in their chamber pot I shouldn't doubt.

"What-ho Budgie!" I say, being all hail-fellow-well-met-you-old-school-chum. "Fancy a drink?" I signal my batman, Radu, to fetch something soothing and he shimmers in a few moments later with a tumbler of very old scotch.

Budgie takes a long pull. "I say, Plum. That hits the spot, what?"

I give Budgie my best serious face. "What's up Budgie? It's not like you to sally forth from your closet of secret reports in the midafternoon."

Budgie folds his hands in his lap and looks at me like the old Pater did when he gave me the Talk on the night before I married Mrs. Wooster. "It's dashedly serious Plum. I've just gotten a cable from Calcutta. The Russians have invaded Pakhora."

I set my drink down. "Really? In the hot season? Dammed sneaky of them. But then what should you expect from a country that doesn't play cricket and flogs their peasants?"

"We need you to take a Field Force over there and sort them out."

"A whole column? Seems a bit thick doesn't it? Can't we just send that clever chap from the Guides to go tell the Russkies to turn about sharpish? Bribe the tribes to harry them in the passes and smote them hip and thigh and what not."

I signaled for Radu again. "Radu, be a good chap and get Major Jeeves. And get him some more lamp oil, he's going to need it I think."

In a few days Jeeves had it all sorted and a division of troops was marching along the dusty road to Pakhora again with, it seemed, two divisions worth of camels spitting and snorting in our train. But it never does to meddle with Jeeves' logistical arrangements or you find yourself short of tea and tinned kippers at the most inconvienent time.

Our objective, as explained in the staff briefing by Jeeves with the aide of maps and lots of coloured pins, was the train station at Goatpakhora. This node along the Bahawalpur to Pakhora line was important to both us and the Russkies. Scouts indicated that Ivan was marching there as well with unseemly haste. 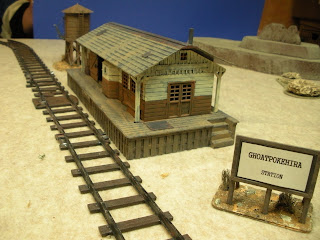 The train station at Goatpakhora, an O-Gauge model RR kit modified by the talented Pasha Dan.

As we hove to in sight of the station a very excited Guides trooper galloped up and flashed me a barra-salaam. "Sahib! The Russkilog are there in the distance! Guns too. And they have the clan of Usman Kahn marching with them!"

The Ivans were deploying in a long line. Tribesmen on foot opposite the train station. Long lines of white coated infantry in the middle and then some tribal cavalry on the other flank. 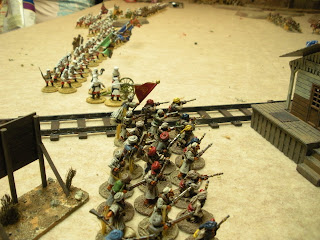 The Russians advance. Russian infantry and guns by Peter with some additional tribal auxiliaries from my collection.

I sent the Guides cavalry and the Blackwatch to secure the train station. On my right were Hodson's Horse with a gun and supports from the Blandingshire Fusiliers and the Madras Sappers. In the center I had the Guides Infantry, the rest of the Madras Sappers, another RHA gun and one of those new fangled Maxim guns. 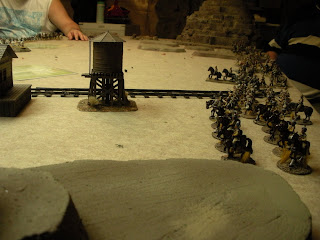 The British deployment with the Guides Cavalry in the foreground.

I opted for a terribly clever oblique order of advance. The Guides and Highlanders set off with a great deal of dash to get the vital train station. I think after their previous poor showing the Jocks wanted to show the Old Man they could soldier after all. The center followed and then when the time was ripe the right wing swung into action to deliver the fatal blow to the Tsarist viper. [Major Jeeves comments: it was actually some improperly framed orders from HQ that delayed the advance of the center and right brigades.]

The Pathans advanced towards the train station, supported by a Russkie gun. On the right Usman Khan lead his mounted tribesmen forward to skulk behind a mountain. In the center, the Ivan infantry advanced a bit to post their gatling guns on a small hill. 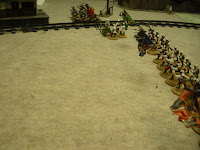 Russians advance with a great deal of flag waving. Peter gets his flags at Fall-In from someone named 'the Flag Dude' or something.

The Blackwatch set off with a great huzzah! but the lead company attracted the fire of most of the Russian line plus the two gatling guns, one of which inflicted a rather appalling 7 hits! It was broken in a bloody ruin. The second company managed to beat the Pathans into the train station however, and set about knocking holes in walls to defend the objective. The Guides Cavalry swept around the other side of the station. 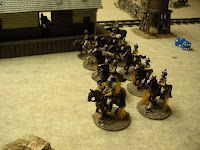 On the right, one squadron of lancers busied themselves frolicking about with the tribal horse, but without much effect. 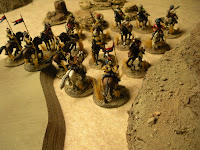 The advance in the center: 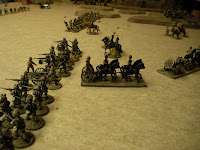 That young Kipling fellow records the events for the Bombay Times: 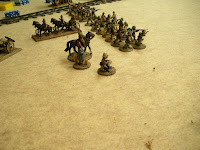 On the left things were going swimmingly; the Blackwatch were snugly ensconced in the station and the Guides Cavalry had a smashing charge at the Pathans sabering about them like a maiden Aunt at a Parish jumble sale and then following into a company of Russians who had advanced to attack the station. 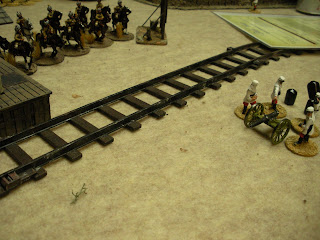 This left the Russian flank hanging open like Stinky Smythe's mouth when the Latin Master asked him a not-particularly taxing question at school, and it worried the Russian High Command: 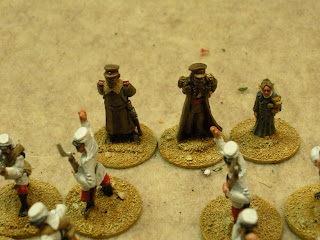 Peter's Russian High Command including the Tsar and the Prince Imperial with teddybear.

In the center things were going not-so-swimmingly. I advanced the Guides to support the Jocks while Johnny Sepoy and the Ivans banged away at each other alarmingly. 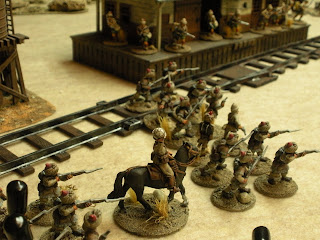 The Russkie gatlings both jammed, but not before the RHA section and the Maxim were forced to retire and two companies of the Madras Sappers were rendered hors d'combat. This left the ammunitionn column and a baggage camel holding the middle. 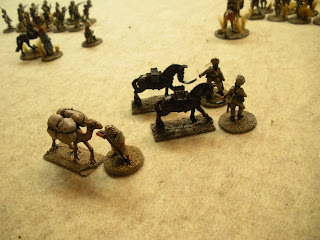 Over on the right things were looking better though. After a bit of hemming and hawing the brigade finally advanced to engage the Russian left. The second squadron of lancers put in a wonderful charge that swept Usman Khan from the field. Supported by rifle and artillery fire from the rest of the brigade, the squadron then swung about to attack the Russian left. A company of sailors delivered a volley but it wasn't enough and the sailors were sent packing back to St. Petersburg. 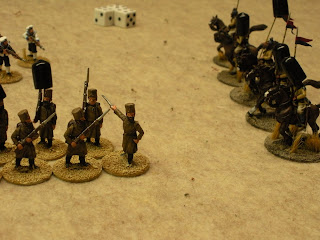 The lancers were pretty done in by now, having delivered two charges worthy of an engraving and write up in the Illustrated News. But the rest of the brigade was coming up to threaten the Russian Bear, who now had both flanks exposed like a nautch dancer's.

I watched the Russians begin their withdrawal through my field glasses with a certain satisfaction.
"Well Jeeves. Jolly good, what? Bit of a hard go, but all's well that end's well and all that, eh?"

"I think the lads have done quite well today. Say something nice in tomorrow's Order of the Day and issue some extra kippers for dinner."

"I've already taken the liberty of doing so, sir."