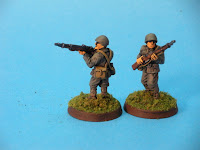 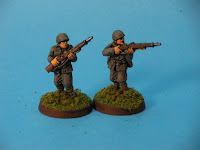 In 1943, after the Allied capture of Sicily the Italian Royal government, did the sensible thing, imprisoned Mussolini and surrendered. The Germans promptly rescued Il Duce and formed the Italian Socialist Republic, or RSI. The Allies naturally referred to these Fascist hold-outs as Really Stubborn Italians. 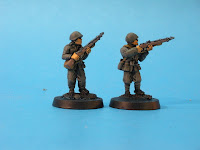 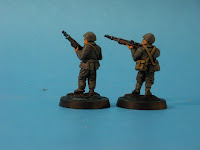 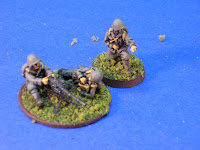 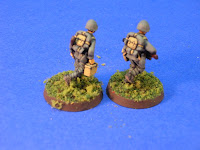 A friend I've met through the local convention scene asked me to paint up his RSI army for him and this proved to be a somewhat stubborn commission. I started with the platoons worth of Black Tree Designs regular infantry last fall while in school. In fact I took step-by step pics to illustrate a painting guide I was writing for my technical writing module. 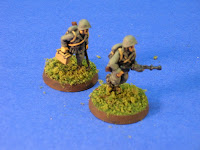 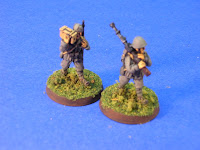 In the late winter he added some machine gun teams to round out the rifle platoon. Four 2-man LMG teams and two 3-man MMG teams. These are from Bolt Action. Nice castings. Delicate, detailed sculpting and good proportions. I quite enjoyed working on these boys. 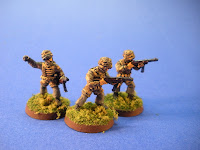 Last came a platoons worth of paratroopers. Bolt Action figures. These are really nice sculpts with lots of detail. The camouflage intimidated me so these took a while. I actually started them at the same time as the MG teams but that was too much to work on all at once so I broke them into two lots. I had started working again in the meantime with crazy retail hours, so my painting output suffered. Plus their uniforms were giving me some pause for thought. 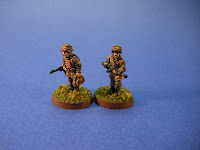 I needed a break to cheer myself up, so I painted up the 15mm German para force for myself. This actually helped me think through my problem with the Italian camouflage. I'm quite pleased with how they turned out.
They almost make me want to do 28mm WW2. But not quite.