I've been working away on a commission of 15mm Sudan figures. The customer has planned very large armies organized for The Sword and The Flame. First up were some Old Glory 15mm Mahdists. Nice enough figures. Deep details, so I could use my usual technique; a dark undercoat and then drybrushing or blocking the colours overtop. The only hitch was finding a nice fleshtone for them. I settled on GW 'dark flesh'. 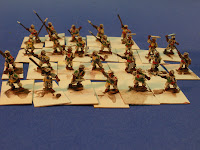 Part of the British force is some Peter Pig figures. These are nice figures, but the details are shallow and not terribly suitable to my usual technique. Fortunately my buddy Patrick had bought some Army Painter Dip at Hotlead and was giving it rave reviews, 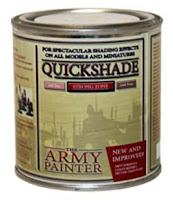 and I had a can from the guys at WGG Distribution that I hadn't tried yet, so I thought maybe this would be what I needed to make the details pop on those Piggies.


I was nervous, but here are the results: 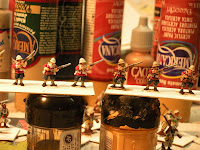 Figures with the basic paint job are on the left, and post-dip on the right. I brushed on the dip to save material and make less mess. With a brush you can also move it around if you find it pooling somewhere you don't want it to be as dark. It's basically a tarted-up version of the old brown-wash technique I used many years ago. I'm pretty pleased. All the straps on the British troops were pretty painstaking to do. I would have hated to try and do them with black lining or something. I may go back and highlight the pith helmets and ammunition pouches. I'll ponder that while I work on some Fuzzy-wuzzies.

Here's a shot of the command group: