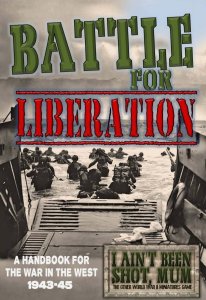 The long awaited first supplement for I Ain't Been Shot, Mum! (3rd ed.) has finally been released in pdf format. I ordered, downloaded and had read most of it within a few hours of reading the announcement on the Too Fat Lardies Yahoo group. It is well worth the GBP10.00 price tag with 99 pages of well laid out, densely packed order of battle and vehicle spec goodness for your late war western European theater games.

This supplement covers British and Commonwealth forces, Americans, Free French, Germans and Italians (of all political persuasions). Each country has vehicle and troop specs and pages giving the organization and supports appropriate for a basic rifle company, motor/mechanized infantry company, armoured company, armoured recce company, airborne (parachute and glider if appropriate), commando/ranger units, mountain troops, volksgrenadier and volksturm units for the Germans. The significant changes in the American armoured infantry company from 1943 to 1944 cause there to be two separate entries.

The more armour friendly nature of 3rd edition IABSM means you can actually field a complete armoured or armoured recce squadron. Now the player has the info needed to do that within the game context. I knew I wanted to build my Shermans up to squadron strength... now I can!

The graphics and layout are greatly improved over the supplement from the 2nd edition. There is lots of use of boxes and colour to help you organize your support units into what would be an appropriate level of support for your company and what would be rare or off board. The amount of information is also greatly increased. So much so, that Richard Clark has decided to split the late war into two books. I can only wait with baited breath for the Eastern front supplement. I hope the supplements for the early war Blitzkreig/Barbarossa years aren't too far behind!

I'm going to contact Staples on Monday and see how much it will cost to get 99 pages colour printed and bound.
Posted by James at 1:32 PM