I was gong to test my techniques on the Bison models and the 5 ton trucks before I painted a LAV, but I got excited and finished one yesterday. 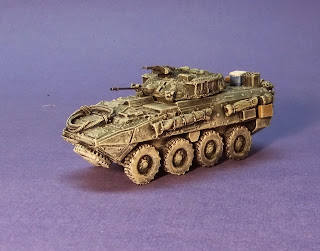 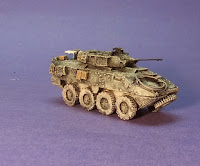 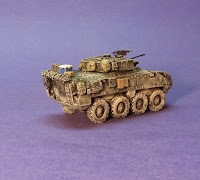 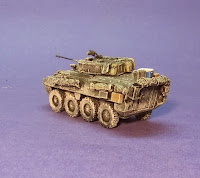 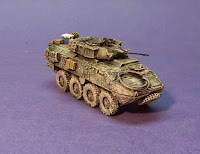 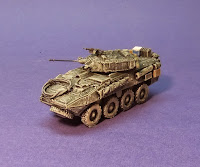 It is an S and S Models resin LAV III Kodiak pimped out with stowage from S and S, RAFM and Legend Productions (the cooler on the back is a resin piece from Legend). The tow cable on the bow I made myself from picture hanging wire.

I painted it in Tamyia Olive Green, and picked out or highlighted the stowage with lighter shades of khaki and greens as the mood took me. The tow cable and tires got some Vallejo "German grey" to highlight them. The cooler got a coat of white and then some bright Games Workshop blue. I then gave everything a liberal dry brush of Americana "Cool Neutral" going heavier on the bow and around the wheels and then lighter towards the back and top. I only wish the model had an open hatch so I could have included vehicle commanders for more character.

I also painted up that broken LAV-25 Patrick gave me. I turned it into an IED casualty to use as an objective for the Coalition forces.

Again I added some stowage from RAFM and S and S. The pack from S and S included some badly folded, unrolled tarps or tentage so I included one on the base as some tentage that got blown off and come apart. Same painting technique as above and then I dry brushed more Vallejo German grey around the blast crater and up the sides of the vehicle itself. If it had been a plastic kit I would have cut out some of the doors and hatches too, but I wasn't going to attempt that with this solid piece of pewter. I also deliberately refrained from including any casualties on the base. Not only qualms about taste but also the scenario might have the crew wounded but holed up in a building or something and needing rescue.