Just concluded another highly successful joint operation between the Chaplain Branch and the CIC. After a couple of delays as we sought mutually free weekends, the Mad Padre was able to come down for our second gaming weekend/sleepover; the first Thundering Dice weekend of the year!

Saturday morning he arrived good and early for gallons of tea, waffles and bacon followed by a game of Black Ops. This scenario was an extraction. The JTF2 team was inserted into the arid Western Regestan desert to snatch a high ranking Taliban commander from his compound. 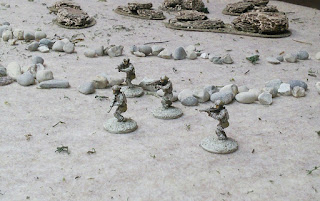 I ran the defenders and for most of the game my sentries were on random dice roll generated movement as Mike did a lot of cautious sneaking to keep his noise markers to a minimum. The sniper team on overwatch took out a couple of sentries that were a threat. One team infiltrated behind a sentry in the orchard and eliminated him from behind with a knife.
He kept one team in reserve while the other two slipped into dark rooms to silently eliminate my sleeping fighters. All the while my sentries were looking in the wrong direction or failing their spotting roll. 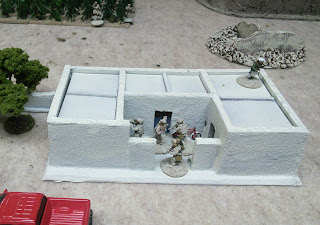 The sentry on top of the building in the above picture did finally look down into the courtyard. He ripped off a burst from his AK, the special forces operators fired back, the sniper fired. The sentry passed eight saving throws before going down!

All the noise markers finally roused my commander who walked out into his courtyard to see what was going on.
The JTF2 team dashed up and took him down in a flurry of hand to hand fighting. Zap tied and hooded, he was hustled across the street to the red pickup where my one remaining sentry was finally sure something was up and challenged the shadows, who fired back, gunning him down.

Mission accomplished the teams headed for the dry river bed to exfil back to the pick up. Behind them an airstrike swept out of the dawn light to blow the compound sky high.

So a lot of fun and pretty tense. I may have to revisit the stealth rules. I may have been making the sentries too dim or the special forces too stealthy.

After some pastrami sandwiches and beer for lunch we knocked some rust off our Chain of Command awareness. Mike used his new Soviets to attack a reinforced platoon of Germans holding a village in Russia. 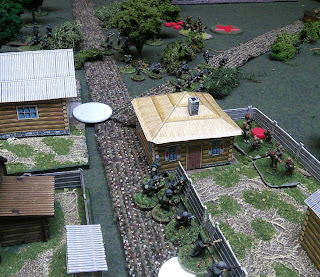 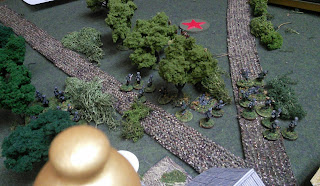 He took a pregame barrage, a Maxim HMG team and a scout section as supports. I took two green rifle sections, to get the extra muscle and as a cheap way to get two more MG42s!

He tried to quickly bounce my one jump off point (JOP- the highly stylish white poker chips) with his scouts, but I deployed a section in front of them effectively ambushing his elite troops.

We had another pair of sections firefighting in the grove of woods at the fork in the road.

He brought another section on to support the scouts pinned in the farmyard.

I brought a section on and moved them up the middle to flank the new section. He deployed his Maxim gun to counter them, which scored 10 hits on its first round knocking out half of the section. The second time they fired though he rolled 10 misses!

His remaining scouts assaulted the farm house, causing some hits on me before becoming martyrs for the motherland.

I then brought on my two green sections. One deployed into the embattled farmyard to pin the Soviet force around his one JOP. The second section went around my left to pounce on an unprotected JOP and then assault the rear of his section in the grove, killing them and capturing another JOP.

Game over. Time for tea, rest up and then have some Indian take out.

After dinner, Mikey and Patrick joined us for some Lion Rampant. Since the Padre had brought his Lord of the Rings figures, he used his in progress orcs and the rest of us built retinues from my 11th-12th century troops. Mikey was new and allied with Mike by virtue of sitting on the same side of the table. So he got my nefarious Black Company bad guys to fight alongside the orcs of Isengard.

Patrick tried the Italian retinue from the book and I tried out a Welsh force. My Welsh faced off against the orcs (sergeants, expert sergeants, archers, fierce foot/berserkers and the warg riders were mtd sergeants with bows).


I fought most of the battle with the bidowers. Aided by some spectacularly bad courage tests, the skirmishers routed the Orc berserkers and expert sergeant uruks. They also put a lot of hurt on the warg riders, repeatedly battering them. Eventually though the two remaining warg riders rallied enough to ride down two units of the pesky bidowers who failed their evade rolls. But they then got shot down by the others.

Mikey and Patrick meanwhile had laid into each other with a vengeance. After taking some initial losses Mikey got his men at arms stuck in to destroy Patrick's cavalry and a unit of sergeants. Fortunately some good shooting from his crossbows destroyed what was left of Mikey's force.

This morning I woke with a runny nose, so after more waffles we played his shiny new boardgame The War of the Ring while drinking gallons of tea. Lovely board, pretty cards and chits, special bespoke dice and lots of figures for armies, leaders and characters. Took a bit to set up. But he'd played it a bit at home so he new the rules and we could get going.

I played the Free People who have too much stuff to do and not enough dice to activate everything. You have to spend some dice on diplomacy to push the various nations to war, when they can start mustering armies and attacking. You can hasten this by separating off characters from the Fellowship, but that weakens the Fellowship who can only use certain cards if certain characters are with it. You also have to use some of your meager dice to move the Fellowship to Mordor. So strengthen the Free People militarily or get the Ring to Mount Doom.

The Shadow player has similar decisions: raise troops, move armies, attack the West or hunt for the Ring. You can't do everything.

The Fellowship is handled quite elegantly. As long they stay hidden progress towards Mordor is marked on a track, which also marks any Corruption points caused by successful Hunt die rolls. Whenever Sauron had 5 or more dice allocated to hunting I kept the Fellowship stationary. Moving the Ring caused a Hunt and risked Corruption points and being revealed. So I spent a lot of effort keeping the Fellowship hidden and healing Corruption and then moving whenever I could.

I lost Merry (he didn't die, just separated from the rest) to save a Corruption hit in the Vale of Anduin. And I sent Strider to get him and head to Minas Tirith, where he could become Aragorn and do a bunch of cool stuff (plus generate another action dice). Gimli got sent off to rally the dwarves for war.

So by the time I got the Fellowship to Mordor, Frodo had Sam, Gandalf, Boromir, Legolas, Pippin and we'd picked up Smeagol somewhere too. In the final dash to Mount Doom Gandalf, Boromir and Legolas all died hero's deaths saving the Ring bearer and for the final push I was able to use the power from the Rings of Elrond and Galadriel to help Frodo get the action dice needed for the last two moves. Using the Elven Rings is a one shot deal and then Sauron can use them, but it was an endgame move and too late for Sauron.

So pretty cool. Lots of good Tolkien chrome and details from the story (like being able to use the Elven Rings, but there are attendant risks too). The handling of the Quest is nicely done. Much more elegant than what I recall of the old SPI game (I'll admit to only fuzzy memories of that classic), but the military part is a lot simpler (which will probably appeal to contemporary boardgames). I had big fun, but it took us a solid 5 1/2 hours to play. Not for a casual game after supper. Only serious Tolkien geeks with a day to spend need apply.

So after that it was time for the Mad Padre to head home and we can begin planning Thundering Dice ROTO 2-16 for the summer.
Posted by James at 7:38 PM