My last game of IABSM got me thinking that my WW2 Russians were lacking infantry and bigger guns. Earlier this summer I got an email from Peter Pig with a code for 20% off.
Hot damn!
So I've added a full platoon each of SMG armed infantry and riflemen all in greatcoats. 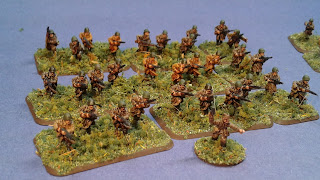 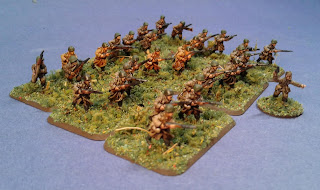 A pack of Maxim guns gives me a second Machine Gun platoon too. 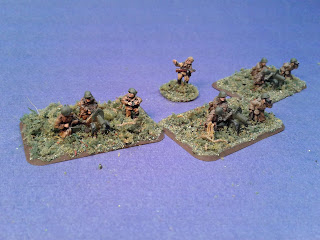 Mikey had picked up a blister pack of Soviet characters for $1 somewhere giving me some extra riflemen and providing Big Men for my new platoons. The flag carriers and NKVD officers got made into rather colourful Jump Off Points for Chain of Command. 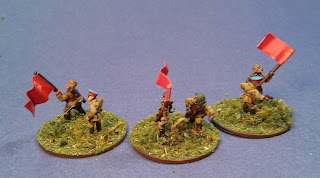 A pack of Observation Teams gives me two company command HQs, since the Soviets need a fixed phone to call in mortar support. Although one of the officers with binoculars had to join the Maxim guns to give each a crew if three. 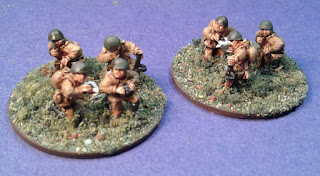 A pair of Zis 3 76.2mm field guns gives them some heavier AT and close direct fire support. The standing officers are some extra Old Glory figures sent to me by the Mad Padre. The ammo boxes are Plastic Soldier Company. 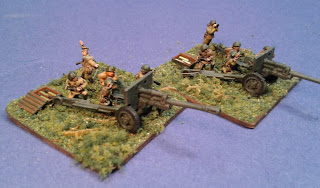 Finally a pack of Scouts with an extra Battlefront officer gives me a small Scout detachment.

I wasn't happy with my initial attempt to paint the amoeba pattern camo and threw them in Simple Green. Second attempt with a simple ink wash looks much better. Although I should have ordered 2 more packs of Scouts to build a full platoon.

A final indulgence was a couple of packs of tank riders, because they are stereotypically Russian. 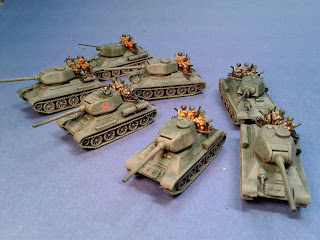 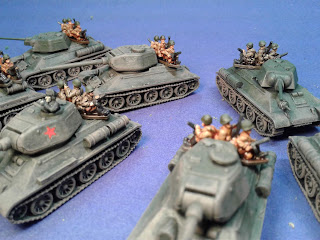 But this additional infantry means the Soviets can go on the offensive now.
Posted by James at 4:19 PM