"We are travellers from the East in search of an ancient treasure."  The tall guy was weird,  and what kinda hat was that? A flower pot on his head?
"Don't know about no ancient treasures fella. Maybe try over at Cohen's Deli.  Old Man Ethan knows all kinds of stuff."
The four strangers moved away down the street. Mrs. O'Grady gave them the fish-eye and accosted Joe "And who are those gentlemen and what do they want around here?" she demanded.
"Couple of Wise Guys from the East Coast I think. Looking for lost loot."
Mrs. O'Grady clucked anxiously. "It'll be troubling then. You'd best run and tell Brendan." 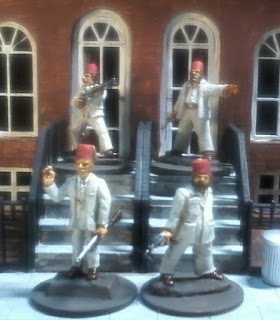 Here is my newest gang, four characters in fezzes given to me by Pasha Dan.
"I've got pulp figures for you" he told me.
"Ummmm.... ok? But I've got enough Tommy Guns. Really don't need anymore."
"Shotguns it is!"
And a couple of weeks later these guys are hanging on my door knob.
Dan loves to convert miniatures  (even if he doesn't need to). So the two with shotguns are converted. A quick paint job and done: a quartet of foreign gentlemen in Pottersville seeking an ancient  (and presumably cursed) artifact. 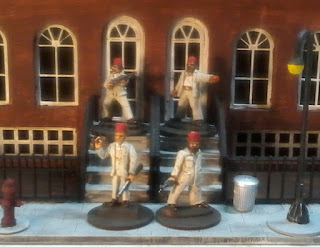