In order to accomplish two objectives: 1. play with my new buildings and 2. refresh my memory of the Chain of Command rules, I set up a table Saturday afternoon and then played out a "Probe" scenario Sunday afternoon and evening solo.

It is D+10, Lt. Black of the London and Oxford Fusiliers (a local, now defunct, Militia regiment that actually spent the war guarding the Welland Canal) has been tasked with probing the village of Cinque Lapins. The Colonel has attached a carrier section to him for the operation. Operating in the area are troops from the 735th Infantry, composed of Polish conscripts and convalescents from the Russian Front.

Studying his map, 'Blackie' opts to send his scouts through the fields to the right of the road where there is some cover. They will then hook into the village from the west.

The Canadian side did well in the roll, getting 3 extra moves. This let them get their patrols well into the village, seizing the key buildings. The Germans tried hooking patrols around the eastern flank to try and outflank the Canadian position. Two patrols on the German left in the farm, and in the center, were used to lock the Canadians in place before they established an even better position.

Lt. Black established himself at the crossroads beside the big hotel. He sent one section into the shop across the street to hold that flank and cover the road. A Bren team was dispatched to the hotel to cover the other road. 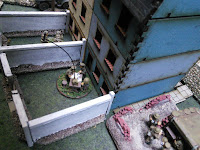 Feldwebel Wurst quickly sent a section to try and seize the terrace houses on the eastern side of the village. But Sergeant Bedford was rushing the rest of the Canadian platoon forward, a section quickly arrived and took positions in the upper story of the terrace houses, with a fine view of the Germans advancing across the open field. A carrier also rattled up the road and took a position to enfilade the field.

Rifle and Bren fire erupted from the windows in front and the brush to the German right. One landser was down. Gerfreiter Schmidt tried to dash forward out of the trap, but the shock and a bad roll just resulted in his section lurching into Sten gun range.

Then followed an incredible run of good dice as the Canadians kept the initiative for 3 or 4 phases. This allowed Blackie to bring up the rest of the Carrier's onto the German flank, push his third section into the hotel and pour several volleys of devastating fire into the Germans. Gerfreiter Schmidt went down in the second volley and the shattered remains of the section ran away.
The Germans then deployed a section into the trees behind the hotel.

The Carrier section now charged across the field to grab the German JOP. The Germans hastily deployed their panzerschreck team which knocked out a carrier before going down under a hail of answering bullets.
The Canadians then played their CoC die to end the turn and eliminate the JOP permanently. German Morale by this time was hurting and they'd lost a Command die.

In the center, the Germans were able tried pushing a scout team into the hotel and deploy their MG42 in the trees. On their left they brought their last section up from the JOP at the farm, hoping for a flanking move.

But the Canadian Sgt was in the shop taking charge of the section there. They poured some devastating fire into the Germans, who went to ground behind the hedge. But even the hard cover doesn't help when the shooters roll several 6s for effect! The remaining Germans ran away over the field and the Canadians dashed into the lane to keep the pressure on. 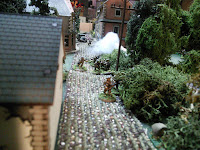 No. 2 section also came out of the terrace houses into the gardens to get a better line of sight on the Germans in the trees and perhaps flank them. They took two phases to come down from the third floor. So note for next time, second floor still gives a good field of fire, but it's quicker to get out of. 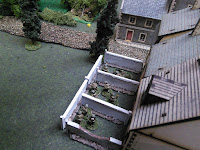 By this time however, the German Morale had collapsed down to 1, and with only one Command die, there wasn't much to do.

Good refresher. Both the 4Ground and Crescent Root Studio buildings worked a treat. Learned a few hard lessons about covered routes of approach and concentration of effort. I like the terrain and am going to leave it set up for a German counter-attack and try to relearn the AFV rules.
Posted by James at 10:26 AM