I had last week off, so I've been able to get a lot of painting done in between eating cheese and the Cold Steel game day with the gang.

The last completed figures for 2016 are these Elf archers. All Vendel castings. Usually I would brown wash the quivers but with the figures otherwise being so drab I wanted them to pop a bit. I also spent a while on the cloaks since those are a dominant feature. The three chaps in the animal skins and the trumpeter are from EO8 Wood Elf Command. 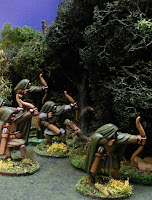 Next is this wolf I found in the lead pile when I started the project. I wasn't sure which way I was going to go for a while: evil werewolf or goodly hound. But after looking more closely at the face I decided he looks pretty evil, so a lesser warbeast for the forces of Angmar it is.

I'm not sure where he came from. By the sculpting and casting he sure looks like an Old Glory casting, but I'm clueless as to how he slunk into the lead pile. He was done earlier in the week with the elves, but the basing wasn't completed.

With a Big Red Eye in the middle of Mount Gundabad.

But it came out badly so I painted it over and went with just a Big Red Eye and the Elf numeral One in the corner. 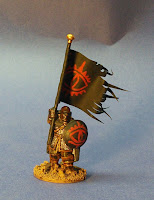 I also really like this Captain. Lots of animation and character. So he'll have to get a name. 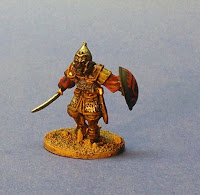 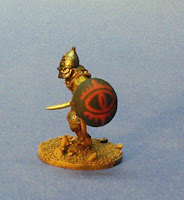 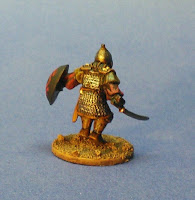 I also have to highlight some of the cool helmets in this unit. They make me think of Brian Froud's or Alan Lee's illustrations. 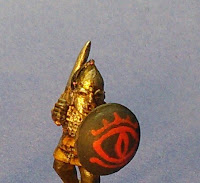 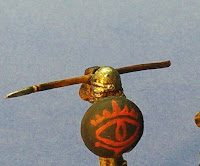 These additions get my Elves up to a pretty large force by themselves, with the capability of fielding 2 units of light missiles with the sharp shooter upgrade, or a massive swarm of scouts. The orcs can now be a contingent on their own, separate from the Men of Carn Dum.
Posted by James at 12:37 PM