A Day with the Mad Padre

Yesterday, after I got home from seeing Five Armies, the Mad Padre came over for some trifle, turkey sandwiches and gaming.

We started things off playing a fun little board game from Victory Point Games called Leuthen. It is, obviously, a refight of Frederick the Great's historic victory. I got the Prussians and pretty much followed Frederick's historic maneuver, deploying all my army on the Austrian left while fixing his front with an equal number of dummy counters. Happily, the Padre thought I might do something clever and have some other forces on his center and right, so I was able to pile into his flank and smash him piecemeal. I played "Contagious Rout" on the first piece I defeated and it's rout threw several other units into disarray assisting my attack considerably. The production quality is splendid with nice laser cut MDF counters. Mike gives a review of it here.

After dinner it was the main event. Mike's spanking new 15mm heroic defenders of the Peasant's and Worker's Socialist Revolution versus my Kitten-Eating Fascist Invaders (although my troops are all Heer, so they deny being involved in any kitten-eating and were studiously looking the other way at the time). This was the first outing for all of Mike's kit and since most of my games end up being 1944 on, it was the first time using my more mid-war PzIVG, Marder and 2 of my mid-war StuG models.

It was a pretty simple game, a village (officially called "People's Agricultural Collective 132" but known as "Turnipograd" to it's inhabitants) in the middle surrounded by orchards, copses of trees and fields. We both had 3 platoons of infantry and 10 AFVs in a meeting engagement.

I sent my panzers to the left and infantry to the right to attack the town. Mike, assisted by the other Mike, sent his T34s to his right and his infantry into the town and the fields on his left. By overhearing their pregame chatter (signal intercepts) I surmised where all the Soviet armour was and had to quick reshuffle the StuGs with the Marders so they could engage the T34s. The StuGs got sent to the right to support the grenadiers. 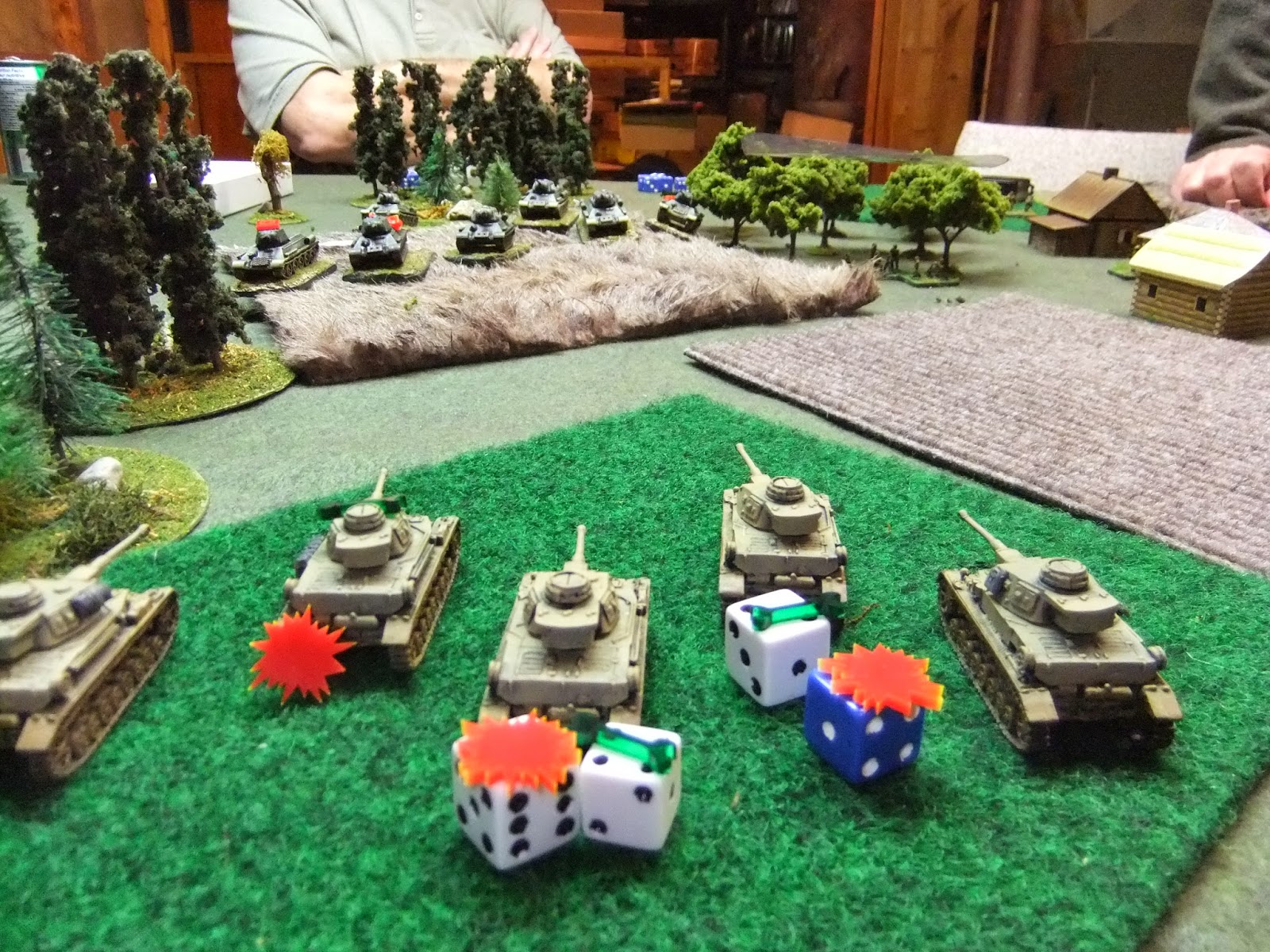 Initial shooting went badly, by forgetting to apply some positive modifiers. Wierdy-Beardy's return fire put some damage and shock on me. 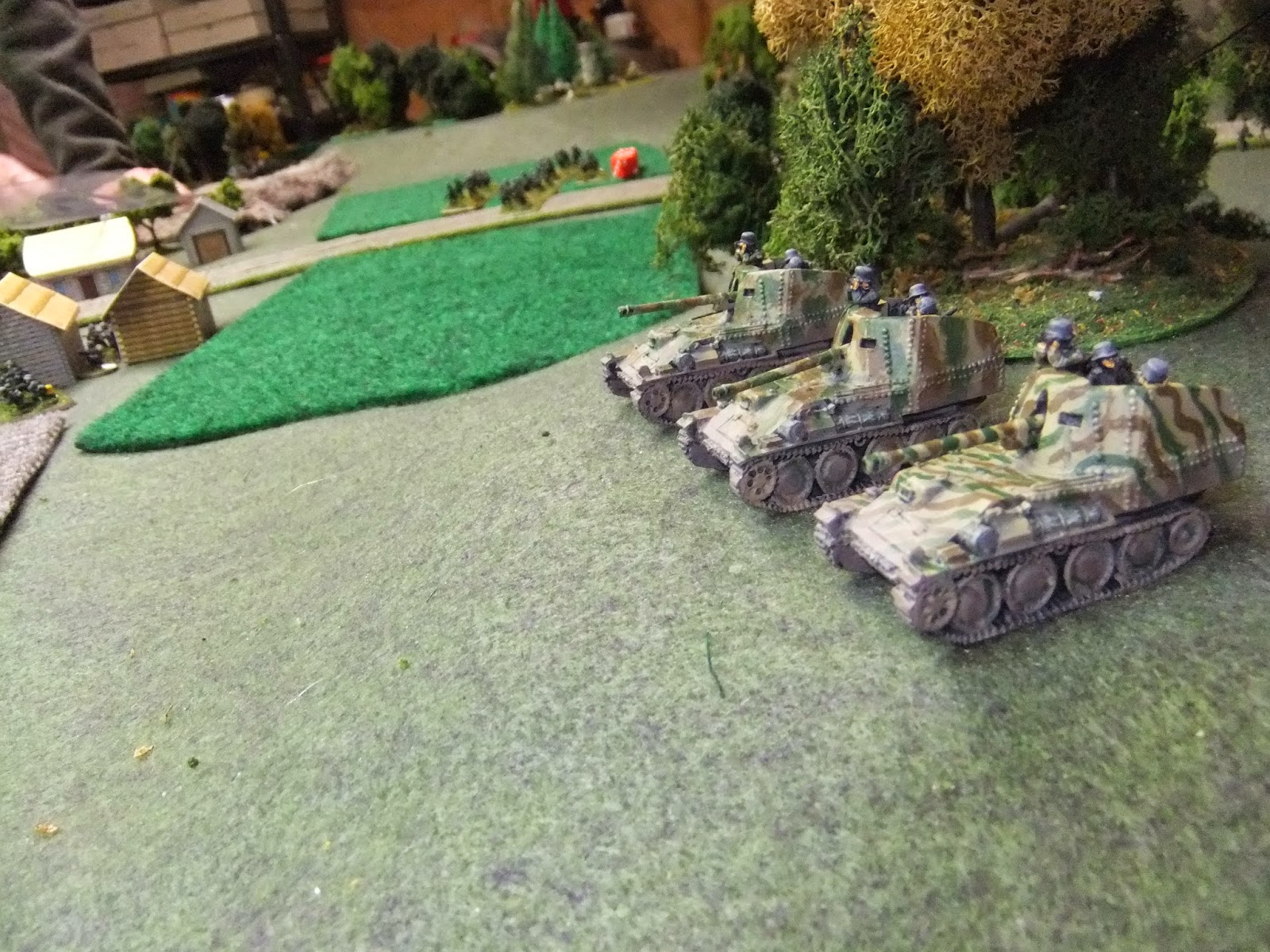 Fortunately the Marders showed up and added their guns to the shoot out, brewing up a few T34s. 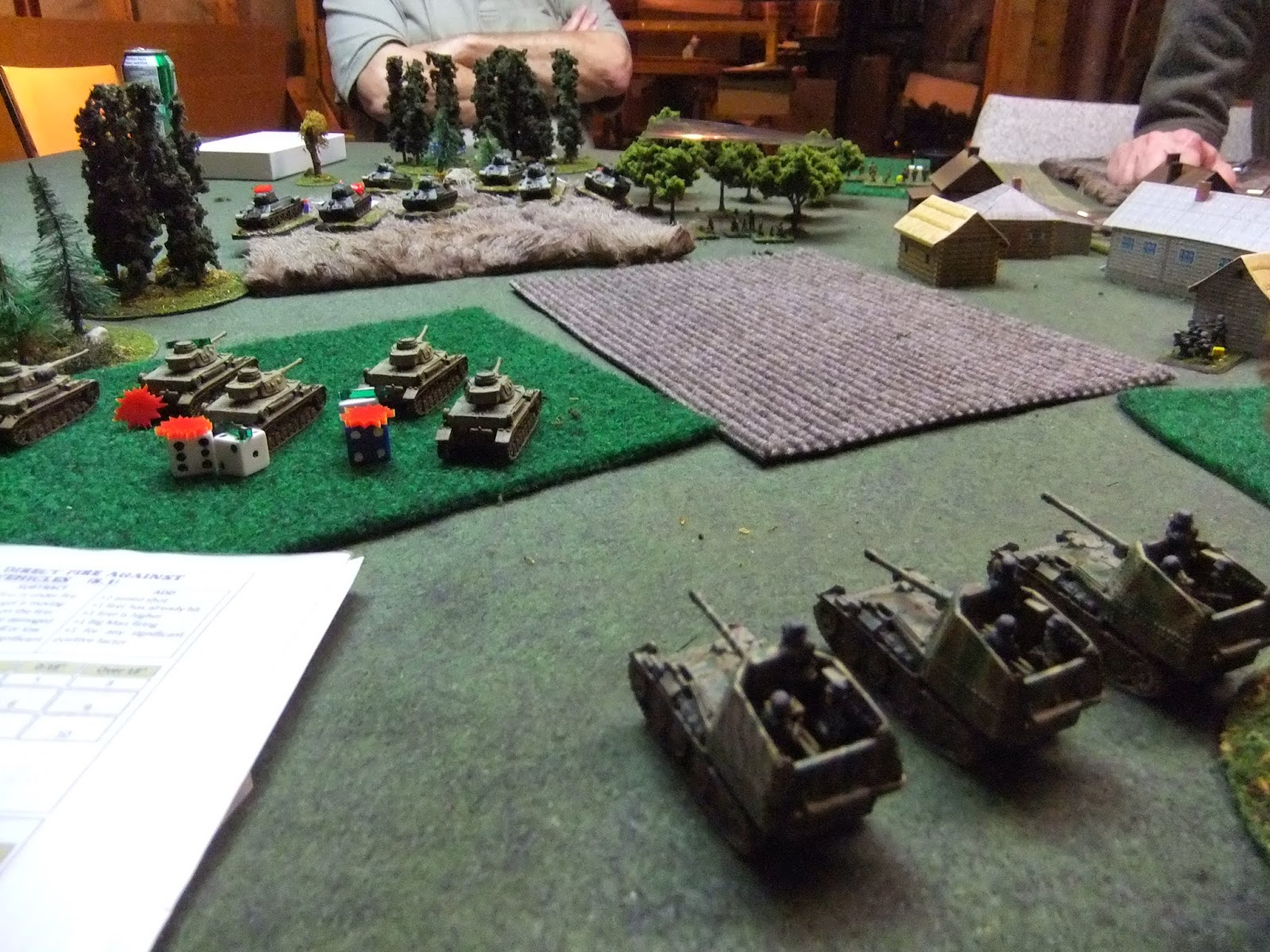 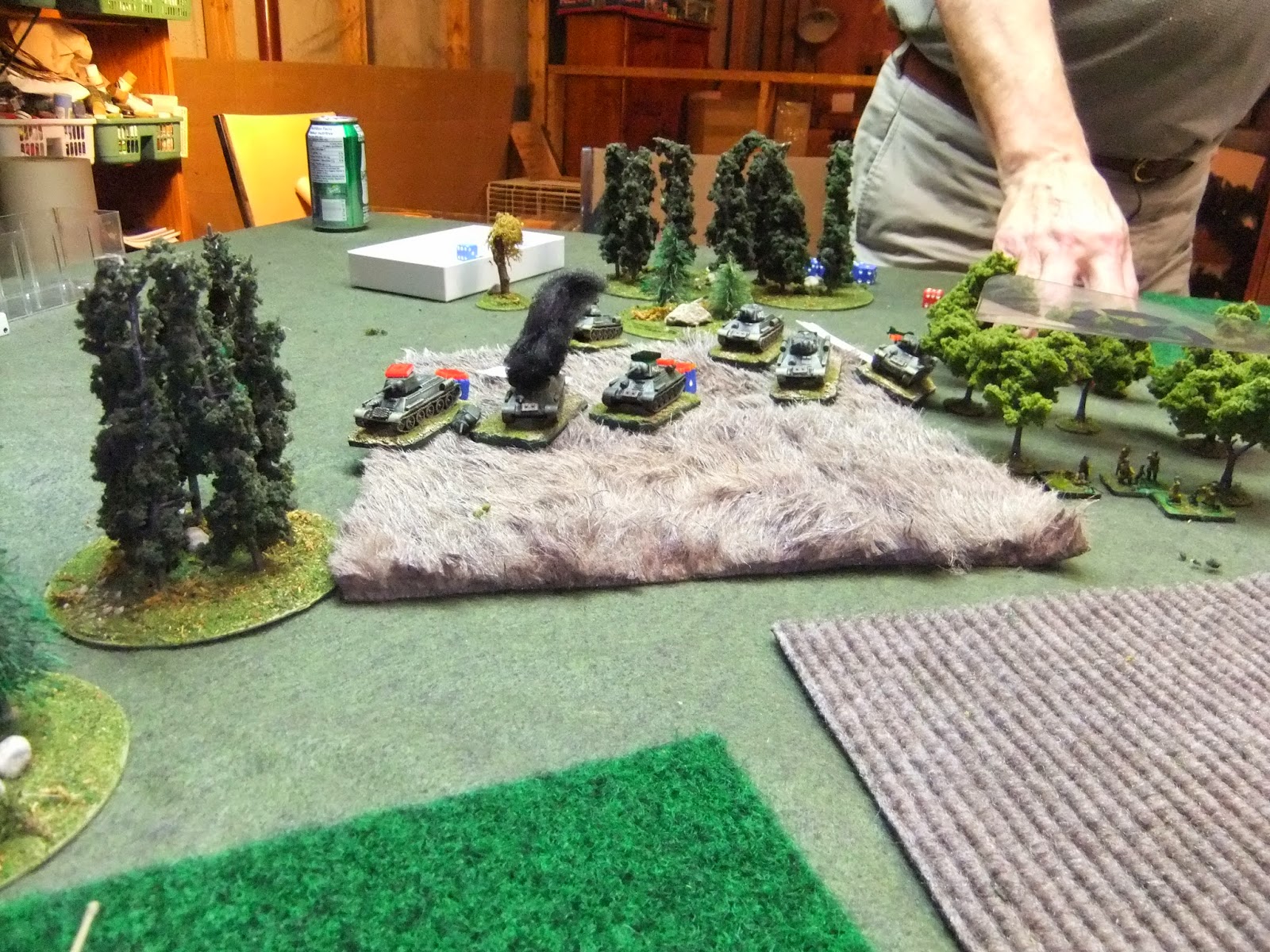 Another platoon of T34s rolled out of the orchard and opened up on the Marders, brewing one and knocking out the gun on another. 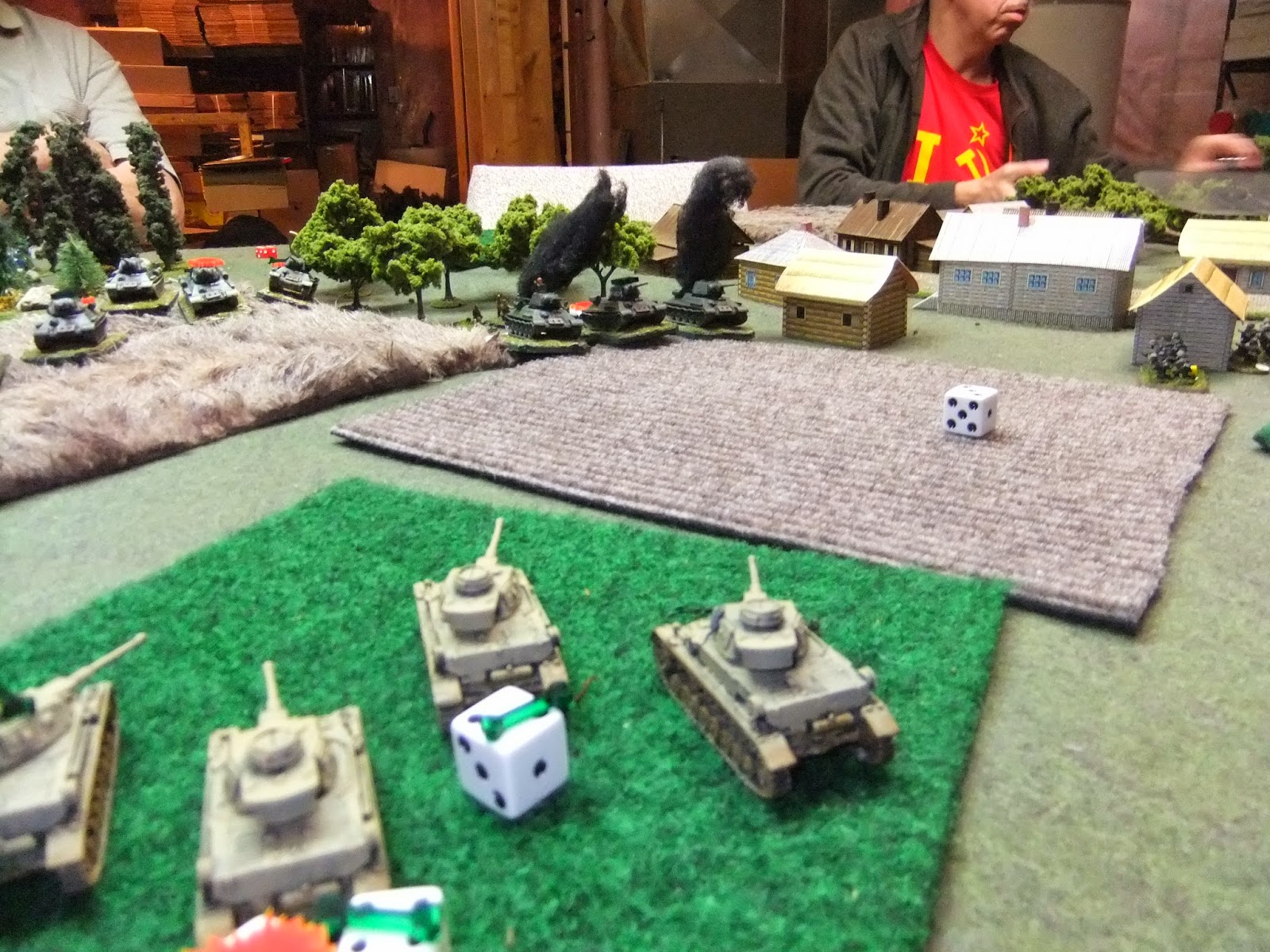 But then my Panzer IVs switched their fire to the new threat and earned their beer by brewing two and causing the third to bail out. This left the Soviets with 2 running tanks.

Around Turnipograd the Padre charged my advanced platoon of grenadiers with one rifle platoon and no support. My landsers were positioned among a few barns and got defensive bonuses, so I thrashed him badly but the survivors just hunkered down. On the far right I had a platoon in a bean field waiting for the StuGs to show up to support them, but Mike brought a platoon with a maxim gun through a wheat field to engage them. We engaged each other in a desultory fire fight. Mike was going to charge me with the rifle platoon and a SMG platoon which would have trashed me I think, but we were out of time.

So fairly even honours. I did a little better in the armour fight, but the Padre had a better grip on the town and was in a better position in the infantry fight. Plus we both knocked the "new unit" curse off a few models!

Today was an outing to visit some other gaming friends and have a quick game of In Her Majesty's Name on Dave's really nice terrain board. The messenger penguin eluded me, falling into the clutches of the nefarious Illuminati. 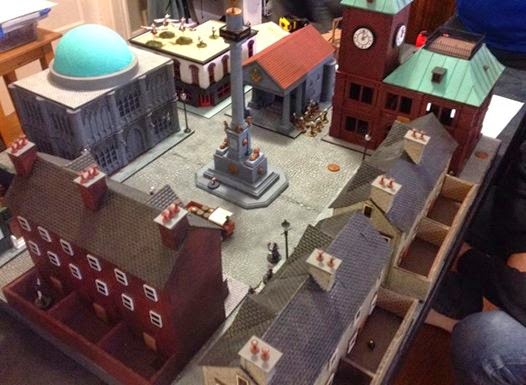 P.S. the view from the Padre's side of the table can be read here.