Gaming During a State of Emergency pt. 2

Last weekend the Mad Padre and I did a bit of Dragon Rampant via Video Chat, which went not badly. This time the Padre hosted and I "phoned it in" so no pictures. But despite a lot of Fog of War created by trying to view things through a tiny screen (I got confused over which unit of Riders of Rohan were battered and which weren't), I did mange to pull victory from the jaws of defeat and squeak out a win. The Padre needs a folding cover or stand or something for his iPhone, as I got to see a lot of his carpet or just a black screen as he put the phone down to move things. But it was fun to relax and paint while doing this.

I also bashed about with The Men Who Would Be Kings and the Mr. Babbage solo engine written into the rules. I only got a few turns in, but enough to help learn the rules and discover that shooting is very nasty. My Bengal lancers sent the Pathan horsemen packing but then Mr. Babbage rolled for the surprise appearance of two bands of Pathan warriors to their front and flank at short rifle range. 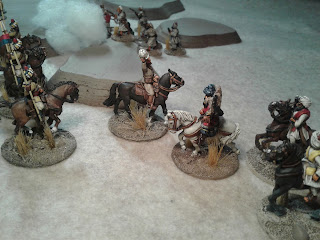 Another thing I realized with this exercise was that I have a lot of Colonial figures. I mean a lot, a couple of brigades in Black Powder, so enough for 3 or 4 Field Forces in TMWWBK. I only used half of my Guides, Gurkhas, Madras Sapper and Highlanders. So except for a few bits to expand into the 2nd Boer War (like Boers and some more British infantry), the rest of my Colonial unpainted lead pile is heading for the 2021 Bring & Buy. The Pathans don't need a second mountain gun and the Raj doesn't need more infantry (British or Indian).

I also had the happy inspiration to try and adapt Contact Front to my Expanse themed SF games though, so there's something to occupy the brain as well. Of course support options rangng from a sniper team to an Assault Cruiser in orbit will take some thinking.

But right now, I mostly feel motivated to work on some terrain. Which I'll post about shortly.
Posted by James at 6:00 AM