So I was stocking the dairy section the other day. I was doing a lot of work in the walk-in cooler and freezers so I had my old CAW logo'd black hoodie on (at least it's black). The boss comes up and hands me a spffy Buy Food jacket "Here, wear this. I'm worried if my boss sees you in that sweater he'll want to fire you."

I suppose I could have taken offence, but I figure if the company is going to give me clothes I'll wear them. I'll wear Buy Food underwear if they pay for it. I've worked in union and non-union shops. One place the company was pretty fair and I thought the workers didn't really need a union. In another, the company seemed to enjoy jerking folks around and they needed one. As long as the management are reasonable and treat folks fairly they don't have to worry about unions. After all I'd rather have the money for unionn dues in my pocket instead of the union's.

As an added bonus I've passed the three months mark at the Buy Food. The boss came up to me and said "Well if I wanted to get rid of you the deadline was yesterday, so fill this out and get it back to me ASAP." It was paperwork for benefits. Benefits! How cool is that?

It's not as great a package as I had at Cooper, but it's way better than I expected. Everyone here needs new glasses and a trip to the dentist.
Posted by James at 8:32 AM No comments: 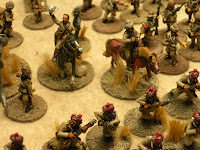 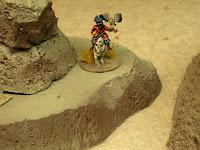 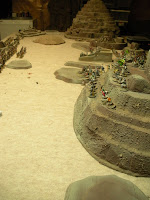 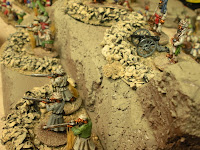 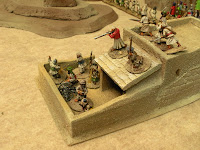 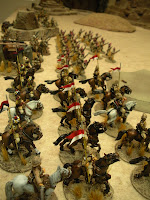 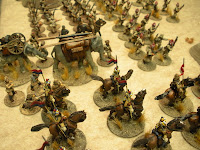 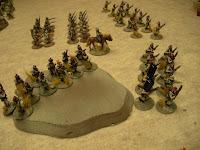 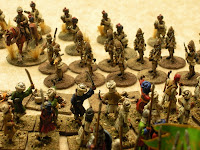 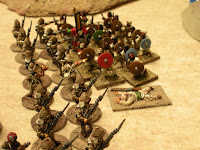 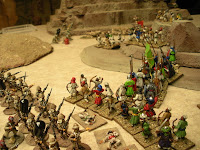 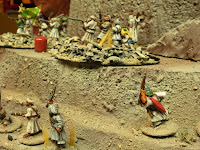 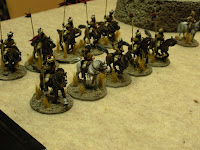 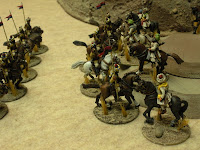 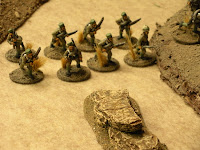 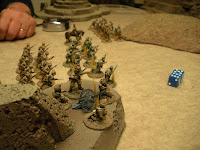 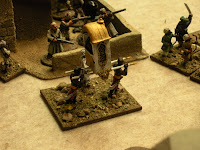 The above was a 28mm Colonial game we played using Black Powder. Since number of figures don't matter we went with 10-12 figure companies or 5-6 figure squadrons for the 'standard' sized units. A good time was had by all and three of the four players had no experience with the rules at all but we still managed to do a lot of gaming in about three hours. Plus I was able to put alot of my toys on the table. If we'd gotten started earlier then the Guides, Guide Cavalry and Sikhs would have been on the right flank, plus a few dozen more Pathans.
The Wazir of Pakora's troops started life as my Medieval Saracen/Moorish army but they've seen more action in Colonial wars than Medieval.
All in all, I'm quite pleased with the rules. They move quickly and allow for a lot of toys on the table. As you can see, I have a lot of toys and it's a shame to leave most of them in the box.
Posted by James at 9:19 AM 14 comments:

Had a first go around with Black Powder last night, the hot new set of rules from Warlord Games that all the cool kids are playing these days.

We used some of Mike B's massive collection; just made 8 stands (24 figures) a 'standard' regiment. He's really geeked out on the period and even gotten down to supply wagons and such which are always nice. Notice the reins on the 15mm wagon and team below: 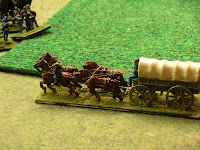 I set up the town of Soggy Bottom at the convergence of some roads and littered the landscape with corn fields (made from artificial Christmas tree branches) and clumps of trees plus fences and a few stone walls.

Each army had 3x 4 regt. brigades of infantry and one two regiment brigade of cavalry. Each brigade had a battery of guns. Everybody was pretty vanilla and all the commanders had staff ratings of 8 since this was our first go at the rules.

But even with the inevitable chit chat, joking about (something my gang likes to do) and leafing through the rules to figure what to do we played to a conclusion with the Union cav breaking the Reb cav and starting to turn the Reb left flank while in the center after a titanic 4 round fight in the town three Union regiments broke two Reb regiments driving them out of the town. I tried over running a battery of unsupported Reb guns, but their closing fire drove me back shaken with three hits. On the right the Rebs (Mike B) were hampered by really crap command rolls. You live and die by your command rolls in this game and how you issue your orders is very important. It creates a nice amount of friction which I like.

It was a fun game, not too much unclarity we couldn't sort out by looking at the situation and as Walter observed "a lot happened" in a few hours. We played from about 8:30 until midnight with almost 600 infantry and 64 cavalry plus 8 batteries of guns (two models each, which was nice; they took up more room and looked prettier) on the table, did a lot of moving about and reached a conclusion.

Here's the Union left wing pushing through some corn after driving back the Reb advanced regiment. 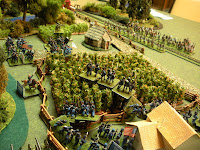 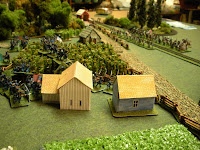 Here's the view from the Reb perspective. Mike's finally gotten his brigade moving to get up and hunker down behind the railway embankment. Two regiments in line with one out front in skirmish. 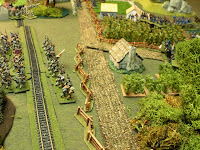 Here's the after math of the fight in the town. Two Union brigades are pushing in while the remains of the Reb brigade hang on to the other edge of town. 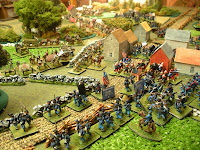 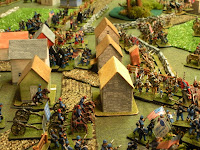 This is the situation on the right wing. I started firefighting the Reb cavalry at the fenced road in the foreground and drove them back over the fields to turn the Reb left. 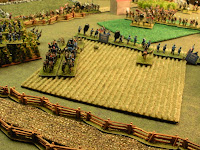 But the Rebs detached a brigade from pushing onto town in order to face left and make a new line along another fenced road. the battery of guns in the center are the ones that drove off my attacking regiment with close range cannister. 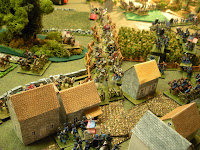 A longer view from the Union right down the battleline. 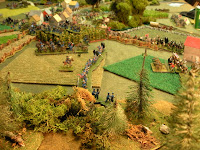 The fences, walls and buildings are Mike's. The buildings are paper models from the Fire & Fury rules. the fences and walls are scratch built. Mike also provided all of the figures (and we didn't use all of them either!). The trees are mine.

Ths gives me hope for playable, horse and musket games.
Posted by James at 6:46 AM 5 comments: