A couple of sprues of Warlord Games new Zulu warriors showed up in my mailbox the other day.

Here are some sprue shots:

They sent me one sprue of each of the married and unmarried warriors. Each sprue will make four figures. One half of the sprues are the same on both, then the other half is unique, giving you 6 different bodies and 15 different heads. There are a variety of arms with moulded in weapon options. The option for the rifle firing figure has both arms moulded onto the rifle, which is nice. I remember trying to glue together the Wargames Factory British infantry with two separate arms and the separate rifle, making it awkward to line everything up in the way you'd like. The details on the shields, loin cloths and weapons are nicely sculpted and the positioning of the figures is such that there isn't any smudging of detail where the halves of the mould meet. As you can see the torsos are nicely animated giving a dynamic looking iButhu when they're all done.
Posted by James at 5:36 PM 1 comment: 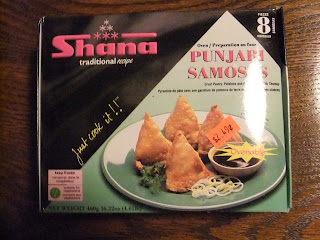 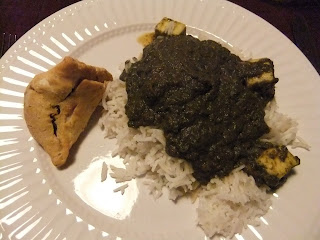 Sag paneer is curried spinach with chunks of paneer cheese. Anupy's recipe is extremely hot. We thought too hot, although having it the second night with some plain roast chicken helped. Next try Snugglebunny will tone down the peppers. The samosas turned out really nice with an excellent potato and veg filling.
Posted by James at 5:18 PM No comments: 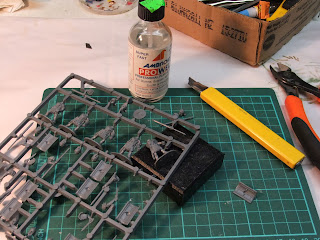 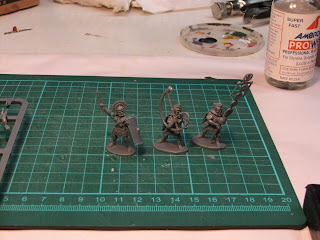 So as previously stated I finally got some of the boys together for a game of Hail Caesar last night. I wasn't sure if Dan was bringing some troops so I left the scenario until the last minute. But the gifted temple prompted me to say "I think the Goths should try and loot it, don't you?"
A town was assembled mid-table. an army of Goths has penetrated the frontier and invaded northern Italy. A field army is marching to intercept them.

The Romans had a large force of cavalry with a few cohorts of lanciari skirmishers, sent as an advance guard.

The Goths with some allied Huns, came on from the other end.
Dan usually does really quite badly with any sort of cavalry. But not last night. Initially both centers held back due to bad command rolls, while both sides wings swept forward to engage around the town.

My Huns got the worst of things. The Roman heavy equites got tired of the skirmishing and charged home: 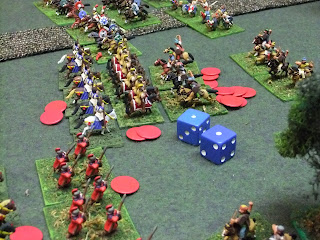 Notice the accumulated hits (red chits)? Notice my abysmal roll for the Break Test? The resulting Sweeping Advance gave the same result on the second unit of Huns.

Meanwhile the Gothic right wing under Mike was doing the same to the Roman left commanded by Patrick: 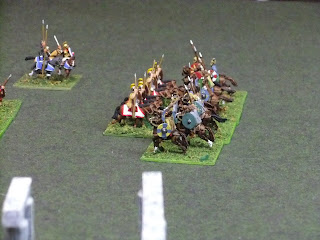 I tried to save things and with some good command rolls I was able to swing my center and charge into the flank of the Roman right wing. However, the target of my charge sensibly evaded, leaving my Gothic bucellari to careen into the midst of a swarm. They hit the flank of some lanciari, but crossed the front of some Roman LC who joined in with a certain gusto.
The Roman heavy cavalry then started counterattacking, smashing into the flank of one of my supporting warbands. And by this time the Roman center had marched through the town to deploy on the edge of it facing my center which was in considerable disarray and suffering some bruises. 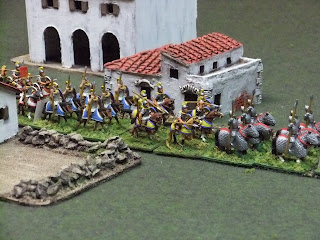 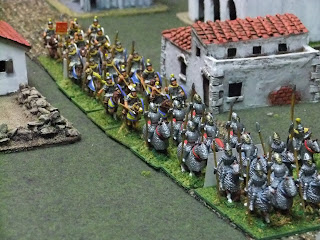 The Gothic king thought it prudent to ask for terms and join the Roman army.

Figures are 15mm and quite a mix of Essex, Old Glory, Chariot and Viking Forge. We accidently used inches instead of centimeters which got us into contact pretty damn fast. And I messed up a few things, but fun was still had by all.
Posted by James at 7:14 AM 6 comments:

Broke my gaming hiatus last night with a small game of Hail Caesar. Upon arrival, my buddy Dan gave me a nice little temple for my 15mm armies. 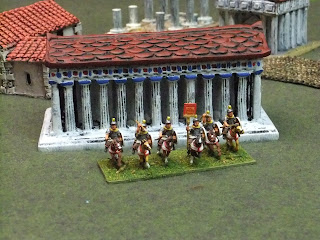 It started out as a brass mantel piece decoration that someone probably brought home from a holiday in Greece or Italy. My friend's dad picked a pair of them up at a garage sale! My buddy removed them from their marble base and gave them a coat of paint.

Here it is beside the purpose made gaming model I got year's back from Miniature World Maker:

And what is late antiquity without ruins of ancient glory?

A few years back I benefited from Dan's experimentation. The ruin on the right is made from washers and fluted wooden pegs that carpenters use to pin pieces together. The low bits of broken wall are I think match sticks.

So by adding in some buildings I made for my WW2 Italian games, I've been able to accumulate a nice little town for my Romans: 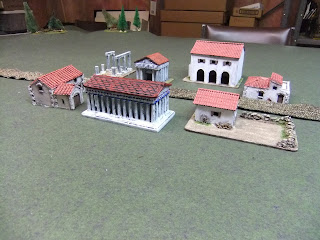 The little farm house and the big building with the three arches I made from card stock. The other two buildings are resin cast Bring and Buy finds.
Posted by James at 6:35 AM 2 comments: 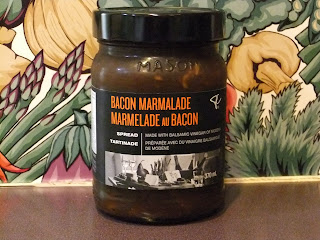 Those who espouse the view that anything is made better with bacon are right in this instance.
Posted by James at 9:07 AM 5 comments:

We didn't need olive oil right away, but the Mrs. saw this in the store and had to get it:

And some more olive oil won't go to waste.

Although I guess the Duchy of Mantovia should take on a more Mediterranean theme now.
Posted by James at 3:41 PM 3 comments: