It's been a not that bad month on the gaming front actually. A fellow whom I met via Twitter turned out to live fairly close, so I had him over for a get to meet each other game of Lion Rampant. For the first time in a long time I tried a Burgundian vs. Swiss matchup and it was hard fought and bloody. Makes me feel like I need to pay more attention to my neglected Swiss.

I've also done more playtests for my SF game. I think I'm on draft 3.2 now.  But at least I'm not totally trashing things and starting over each time. Mikey and I had a very unbalanced game featuring angry miners supported by Belter extremists vs. UNMC Marines and Corporate Security goons. The expected outcome but the highlight was some workers in heavy work suits fighting hand to hand against UN power armour and winning. The main objective of testing rules was achieved, and a better activation idea was thought of. 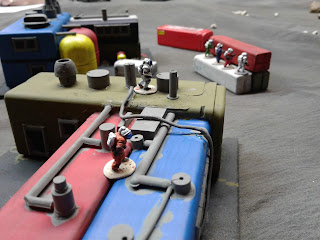 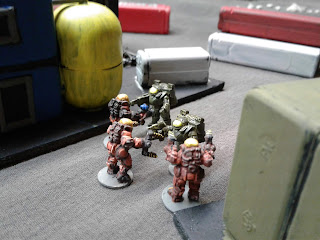 Then the Mad Padre came down with his son for a flying visit. We played my SF stuff again, trying out tanks and the new activation idea this time. Martian Marines overran the base but took heavy casualties. After pizza it was our usual game of Dragon Rampant but I was the Good  Guys for a change, and the Padre's son and I managed a narrow winning draw that featured my Elf king charging the orc legions alone. The Padre conceded the game when he realised he may have fudged a critical courage test. 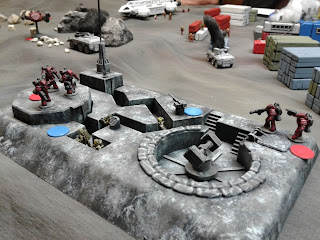 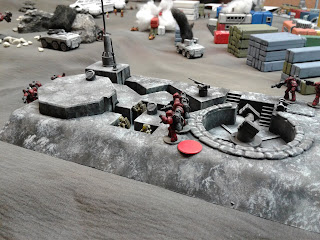 The next weekend, it was a fun day at Broadsword 6 in Hamilton. This is a one day event held 3 times a year as a fundraiser for the Legion Branch that hosts the Hamilton Tabletop Gaming Society. Lots of games and catching up with folk. After lunch I sat in on a Flames of War Vietnam game,  leading some Armoured Cavalry into the muzzles of an appalling number of dug in recoilless rifles and NVA Regulars. I blew up in spectacular fashion. The .50 calls on the M113 ACAVs were not as effective as I'd thought, plus my Sheridan tanks were out ranged by the 85mm recoilless rifles and got killed before getting a shot off. Plus we had no artillery or air support and the NVA force (quite a mass of them and not a VC in sight) included tanks. Yes tanks. The NVA team were also rolling incredibly hot dice. So we were doomed. 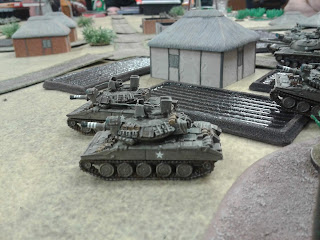 Painting wise not as productive. While digging out rare earth magnets for my Martian tank I found the Battlefront Centurion tank I'd bought for $5 a few years ago and assembled it since I was busy assembling things. In the process discovering that my old Roskopf mini tank Centurions are also 1/100th scale! This explains why they  were dwarfed by the 1/72 scale Firefly they fought beside. But I was 10, so what'd I know ? Everything was "HO" scale, right? 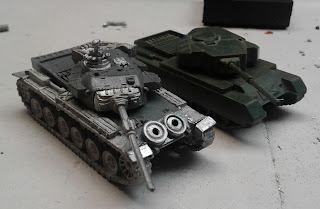 I thought about doing the Martian armour in red, but thought a grey camouflage scheme looked kinda cool too. Plus I have red WW2 British tactical markings,  so they'll show better.

Painting the Centurion also got me finishing the company of T34/85s that has been stalled all summer because my green armour mojo was off. 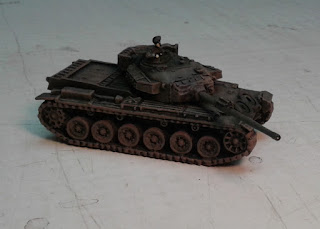 Painting the Centurion and seeing that I had THREE 15mm tanks got me thinking of uses for them. The Indo-Pakistan War of '65 has an attraction, but I'd need M48s and infantry (maybe in 6mm?).  But I also remembered my old African Imagi-nation, Ruanda, who fielded Centurions and upgraded Shermans against the People's Republic of Simbaziland with T34s and T54s (played by an Airfix and a broken diecast JSIIs). But I'll wait until PSC releases their plastic Centurion kit before I order some infantry from Peter Pig's AK47 range. But I do conveniently already have Shermans and T34/85s.

The Padre also gifted me a spare Nazgul. Black prime, highlights, dark grey dry brush on cloak, black ink on horse, silver highlights on armour and sword. I gave the sword edges a green ink wash to try and give it an ethereal evil magic look. 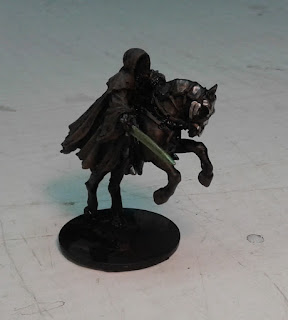 I'll play him as reduced figure elite rider causing fear and the wizardling upgrade, giving him 3 spells to effect courage tests and prod his legions forward.
Posted by James at 3:43 AM 5 comments:

It's all the Mad Padre's fault. Really.

He thought my space stuff looked kinda fun, and being a cat or so away from being a Crazy Cat Chaplain, he bought some of Khurasan Minis space kitties (he's a fan of the Kzinti in the Ringworld books) and a tank.

Now I needed a tank. Ground Zero Games ran a mid summer 20% sale, so I used the chance to round out my troops and oh, get the Martians a couple of tanks.

I've always like the look of GZGs high mobility wheeled equipment with the big knobby tires. When I did Dirtside in 6mm I had a squadron of Paladin and Phalanx wheeled AFVs. They look very high tech and spacey, so Mars needed one.

The assembly was pretty straightforward, although those sexy knobby tires required assembly too. The tight fit involved a lot of filing and scraping. 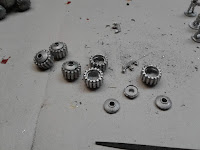 The Paladin cones with 2 weapon options on the remote turret. A cute stubby high energy laser, or a big farking rail gun. The rail gun looks the business to me and aesthetically ties into the MMCs gunship too.

But it's heavy, so the turret needed to be glued in place. Oh well. I tried futzing around with rare earth magnets, but realized after some hazardous drilling that counter sinking a hole into the remote turret/cupola would be too hazardous, I opted for glue. 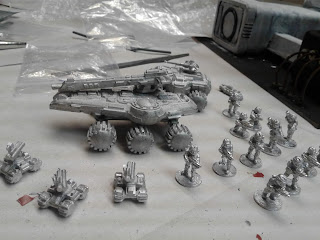 I also like that the scout vehicle looks similar to my gunship too. I added the laser to the side of the rail gun as a secondary weapon/targeting suite. Or something. It's Science Fiction, so rule of cool. 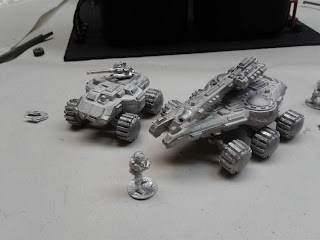 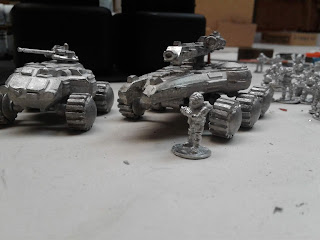 The MMC rifles have been rounded out to two platoons with command and support weapons options too.
But don't worry, the UNMC have gotten more grunts and rocket launchers too. 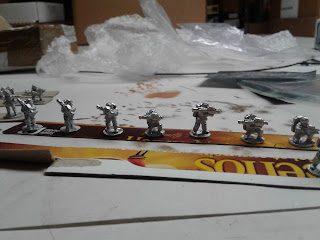