This summer has kept me very busy what with the upheaval at the Armouries etc.

I've managed two games of Lion Rampant. Been wanting to get my new Afghanistan stuff out for some Hyena Road inspired games (and to walk through 5Core and it's bigger cousin No End in Sight), but time slips by. I had hoped to do a bigger terrain project. Finally build a small castle. I had the space cleared and foam core ready, but then my August long weekend got spent moving junk at the Armouries. Oh well, maybe during the winter.

I have after a few months finally got my hands on Mikey's jig saw to cut bases for a bag of pine trees I purchased 7 or 8 months ago.

Irregular shapes cut from fibre board for the bases. Then slope the edges with an Olfa knife. Dremel tool to drill holes. Trees glued in with hot glue. 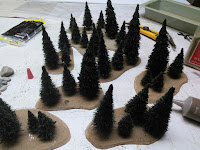 I then covered the bases with brown tinted wood filler and while it was still wet covered in sand from a genuine far northern Ontario pine forest! (Mikey brought it back from visiting his daughter who lives at the end of a dirt road, deep in the northern wilderness among the bears and wolves.)

Of course it wouldn't look right left natural, so the sand is then painted and dry brushed to get some highlights. 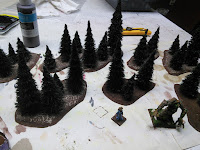 You'll notice that I am also tarting up the bases for Elf Girl and Tree Man while I'm at it. As two major parts of my Dragon Rampant Tolkien Elf army, they need to look better (I should also come up with better names too).

And there the project sat for three weeks as I took the cadets gliding, attended the COs conference and then took the squadron on its first survival training weekend. Whew!

Today I called in sick and after the cough syrup took hold and sleeping for 12 hours I had the energy to finish things up and flock the bases. 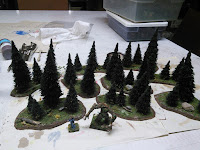 A few broken twigs, some rocks and the occasional tuft or clump of flowers were added as well.

Elf Girl gets a clump of yellow flowers to go with her dress and Tree Man gets tufts and white flowers to add a bit of interest to his base.

Considering how quickly things went together when I was actually able to get downstairs, I decided to buy a bag of 60 more trees last time I was in London.
Posted by James at 3:19 PM 1 comment:

Up and Away Junior Birdmen!

Spent a wonderful Sunday morning taking my cadets to Centralia for gliding. RCAF Station Centralia started life during WWII as a British-Commonwealth Air Training Plan base and until the early'70s it was the Primary Flight School and Basic Officer Training School for the RCAF. Now it is a commercial aerodrome and industrial park but the Air Cadet Gliding Cadre runs gliding days for squadrons in the area out of it.

Only 12 cadets made it but the weather was excellent and everyone got up in the air. There was even time for me, my Admin O, a Civilian Instructor and a mom (they live nearby so came out to watch) to get up in the air.

Gliding is very different even from  bouncing around in a light Cessna. You really notice how you're floating along on the thermals. I had the front seat so I had a pretty excellent view of the sky and landscape. 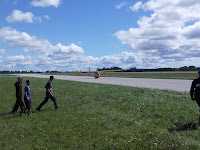