Once again, thngs have fallen together serendipitously. Or it's kismet. Or it's all Patrick's fault.

I've been fascinated by the shadowy 3rd century Roman army for ages now, since researching Legion & Empire. Armorum & Aquila are the only extensive and dedicated 3rd century range of figures out there. Here are some nicely painted examples:
Any other I've seen has been a disappointing mash up of Early Imperial troops with some Late Imperial cavalry and skirmishers thrown in.

Plus after the frustrations of designing Legion & Empire, I realized that the big battle wasn't really where it was at for most of  Imperial Roman military history. Most of your fighting was done by the frontier garrisons, chasing barbarian raiders or doing some raiding of their own. I've thought for a long while that an 'army' based around a cohors equitata (a mixed unit consisting of a cohort of 480 auxiliary infantry and a turmae of 124 cavalry) would be pretty cool, and satisfyingly heavy on the auxiliaries. I find most Roman armies have way too many legionaries and not enough auxiliaries to be honest.

So, last week Patrick gives me this: 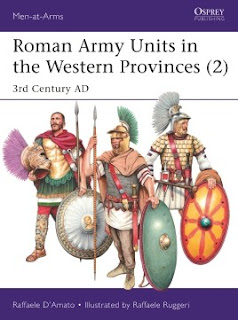 Which gets the juices going again. And gets me looking at the A&A catalogue, for the umpteenth time.

Around the same time Richard Clarke lets out on social media that he's bashing on with a Roman adaptation of Sharp Practice.

Then, while surveying the lead pile, I notice that I have a nice little pile of close to 100 plastic (Wargames Factory originally I think) German tribesmen looking for foes. God knows where they came from, I think my friends collected free giveaways at a convention and sent them my way.

Then I see that Armorum & Aquila is running a nice "buy 4 get 1 free" sale this month. 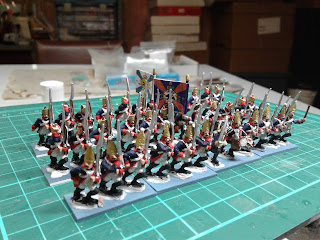 I was still waiting for my Peter Pig order to arrive and had nothing on the painting bench, when my eyes lit upon some Prussian fusiliers and grenadiers that had been primed and waiting patiently in the queue, repeatedly passed over as other armies and projects took my fancy. Victims of the "I've got enough to play with now" syndrome these fellows have sat for TWENTY-FIVE YEARS!!

Redeemed from limbo now, these reinforcements bring my Prussian infantry up to 21 battalions, comprised of:


With the inclusion of low grade troops like the Garrison battalions and Frei Korps, I hope no one accuses me of being a power gamer.

25 years ago I carefully matched facing colours, hat lace and pant and waist coat colours to the flags. The backing of grenadier mitres and the multicolored hat prom poms were all exact for each regiment portrayed.

This batch I stopped caring. Everyone got a generic Prussian uniform of white pants and waist coat with red facings. I did vary the backs of the mitres. The Fusiliers did get actual fusilier regiment colours though. I'm not a total savage. 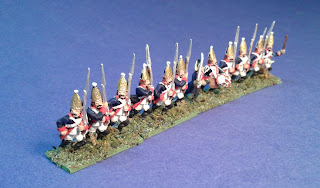 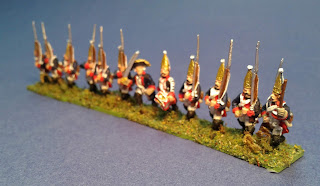 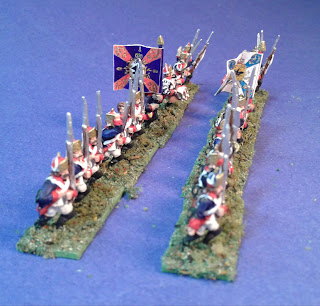 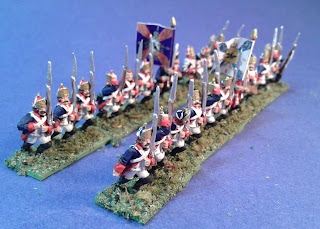 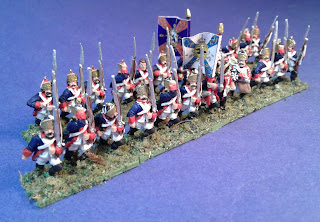 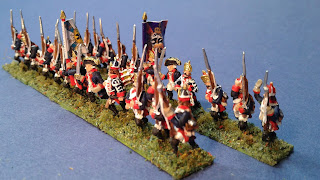 Last weekend I finally got up to the Mad Padre's for one of our irregularly scheduled Operation Thundering Dice weekends of gaming.

We started out pitting his Space Kitties against my MMC in the epic battle for control of the arid mining colony Litterbox 4. His kitties were suitably aggressive, pouncing into close combat several times.

He had me outnumbered in AFVs and I had him outnumbered in troops, so I concentrated on taking down his fast moving armour. But my power armoured Fleet Recon fireteams got pasted. The game shifted in my favour when a random event resulted in a piece of debris hitting a major concentration of Mike's kitties and one of their IFVs.


We then gave the Games Workshop big battle rules War of the Ring a try with a very unbalanced game. It is very figure intensive. Companies of 8, and a formation needs at least 3 companies to have a chance. Also the basing is very critical, a point against IMO.

My trolls proved very hard to kill and stopped the Rohirrim cavalry dead.

The magic was interesting though and I liked the Might Points allowing heroes to go do heroic stuff. So I might steal some ideas for my own games.


Sunday after breakfast it was time for some Dragon Rampant and a bit of Evil vs. Evil as Mordor and Isengard got into a disagreement over some hobbits.

Mike was having terrible dice luck.  He kept trying to use Saruman to cast befuddle on my troops before attacking.  So my Nazgul said "Good idea!" Except my activation rolls were better and my trolls charged downhill into magically befuddled troops sending Saruman running back to his tower.


This weekend being a long weekend it was hard to get anyone together. But Sunday night Dick came over to help me play some of The Chicago Way. I did up two roughly equal gangs and we were able to run through two games in about 5 hours, which included a break for pie.

We played a "Raid" scenario with my gang attacking his gang in the warehouse, then after some apple pie that Mrs. Rabbitman had made, we tried the "Running the Gauntlet" with Dick's hootch convoy getting ambushed by my gang in the dangerous streets of Pottersville.

I mainly wanted to learn the mechanics better and try my dual Tommy Gun armed figure from Steve Barber. He blazed away like Frank Castle in The Punisher, but he wasn't over powering either.

My gunsels burst in the back doors, causing lead to fly. Big Tony Canolli and a couple of heavies rained lead down from the mezzanine level. Meanwhile I'd sent my hit man around to the front door to get behind them. Dick's punk guarding the office fired through the door at him and my heavy shooter blasted a volley back. A hood with a Tommy Gun moved to the foot of the stairs and blasted Big Tony before Mad Dog  gave him both guns. The fight ended with a lot of very close range blazing away around boxes. 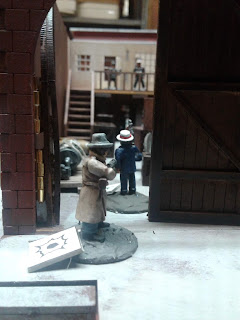 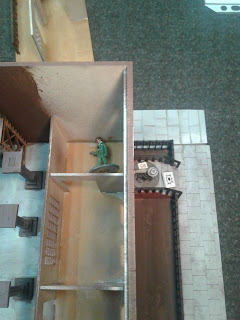 In the second game I wanted to learn car rules better. Dick got cautious and dismounted most of his gang to clear the street before bringing his vehicles down. Since he wasn't going to drive into my kill zone, I moved the kill zone to him and a big shoot out erupted at the corner by the deli complete with a bullet riddled car crashing into a light post. My Boss did a very dramatic walk up the street and plugged Mad Dog with a single shot. My hit man then strode through the carnage outside the deli to take down Big Tony at close range. Dick had tried to outflank me by sending two hoods through the warehouse but he effectively removed their firepower from the fight at the intersection when it mattered. 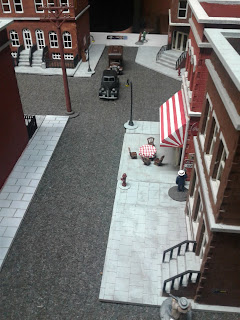 On the painting bench I've done this legion of Foundry Late Imperial Romans for a friend (which have been in the queue 4 years or so), and whilst waiting for more Peter Pig Russians to arrive I decided to get some paint on these 2 battalions of 15mm Old Glory SYW Prussian fusiliers and 1 battalion of grenadiers because Scott tells me he's doing 15mm SYW Austrians next. Scott never does things by halves, so I figure I need the reinforcement. 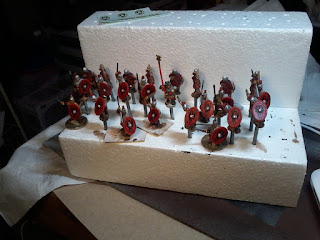 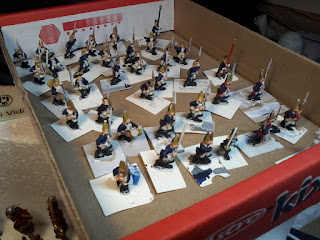 Besides , they've only been sitting primed and waiting for 20 years or more!
Posted by James at 5:21 PM 3 comments: