No I didn't get to go to Salute. In fact if I ever get to England I'll be with Mrs. Rabbitman and I highly doubt that she will want to spend a day out of our trip at Salute.

But Pete did. He goes every year to visit his parents and shop at the big show.

And here it is just out of its packaging and on the arm of my recliner: 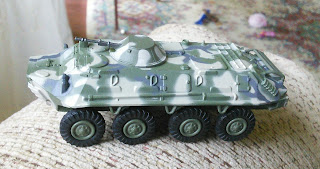 I have no idea of the manufacturer, except that the packaging is all in Cyrillic except for one line in English naming a Chinese factory. The wheels are cast to the lower body with added rubber tires and don't spin, which is a plus actually.

Here are some of my ANA checking out their new ride: 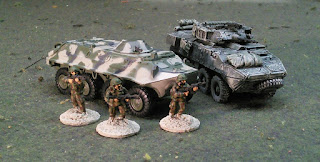 And some comparison shots with one of my LAVs: 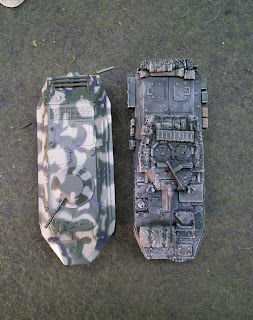 I think it compares pretty well and seems in scale.

According to Wikipedia (yeah, I know, I know....) the ANA have a few hundred of these still. Most pictures I see are technicals and Humvees though. But maybe they're keeping them somewhere? Who knows? I'll have to figure out a way to get it into a game.