I got the last of my Taliban insurgents done this weekend. A lot of them have combat jackets and ammunition pouches, so they aren't your local Fighting Age Males, unemployed after the harvest and given 200 bucks and an AK to go shoot at the feringhees. These chaps are more Tier 1 insurgents. Some more local force insurgents are something to get when I can afford to buy some more.

But here they are:
Here's the complete force:

6x 4 man fire teams each with two rifle, one LMG and one man with either a UGL or RPG plus 5 leaders. All supported by a recoilless rifle, HMG, SA7, sniper and 2 suicide bombers. I could give them technicals, but I don't think they were much in evidence in the Panjwayi district while the Canadians were there. All are Elheim Figures.

Not a bad little force to start, if somewhat outgunned by all the LAVs!

I'm being quite pleased with how this building that I made for my 28mm NW Frontier stuff looks beside my 20mm Taliban. 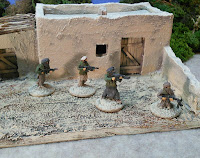 Had quite a crew over last night for a game. We decided on ACW since Wierdy-Beardy's collection hasn't been out in a while and it's big enough to accommodate what might have been 9 players! Only 6 of us in the end, and I hadn't seen 4 in a long time, so even though I had the table set up and the armies sorted early, we still had delays for the "getting caught up phase". Which is OK, lots of laughs and chatter, with the occasional "Hey it's your turn!" "Oh right."

Mikey's ACW armies are an assortment of 15mm manufacturers and originally organized for Fire & Fury (the observant among you will note the labels on commanders etc. for the administrative requirements of F&F).. But since I was GMing we played Black Powder. The thing I like about BP is the flexible unit sizes. Since I was anticipating many players and since Mikey has done a lot of command stands, we went with a 'standard' unit size of 6 stands (18 figures). But this meant that all his colourful units could be individuals instead of just getting lumped into a bigger brigade units like in F&F.  So his grey uniformed Pennsylvanian militia were a large unit with 10 stands ('Raw' special rule). His Berdan's Sharpshooters were a small unit of 4 stands ('sharpshooter' special rule). An Iron Brigade regiment in their Hardee Hats had the 'Steady' rule and both sides had distinct Zouave regiments with the 'ferocious charge' rule. The Union also featured a Colored Regiment, but we never got around to deciding what special rule they ought to have. Maybe 'stubborn'? The Union had 4 divisions, each with 6 or 7 regiments (organized into 2 brigades) and 3 batteries (we didn't come close to using all of Mikey's artillery!). The Union cavalry division never got on the table, since the terrain was so closed in. The Confederates were smaller and fewer guns (2 per division) but we gave them better leadership.

Now onto the pictures which show the state of play when we ended, since I only took them this morning while boiling the kettle for the second cup of tea of the morning!

I had taken over command of my young colleagues troops who were still in march column. I ordered two regiments to deploy but rolled a 'blunder' instead, so they advanced up the hill to get attacked in front by dismounted cavalry and charged in flank by two regiments! Also lost a battery in the process. Ouch. 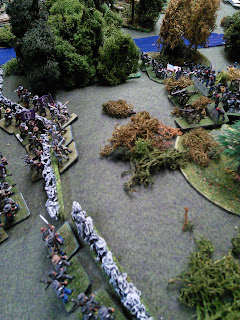 I don't think the Union left and center are in terribly good shape and an evening withdrawal from Cornpone Corners might be required. But fun was had and it was good to see the guys again.
Posted by James at 9:29 AM 1 comment:

I have casualty figures for every period except  I think, WW2. For my SYW and ancient games I have been chastised for not having enough and using casualty caps instead. So I have also completed some casualty figures for both the Coalition and Taliban. I know these cause issues for some, but the recovery of casualties was an important objective for Coalition troops. It also seems hypocritical to suddenly become sensitive now.

These are all from Elheim Figures as usual. For the Canadians I had to settle for US Marine figures. You can see the prominent groin armour that makes using many American figures problematic. 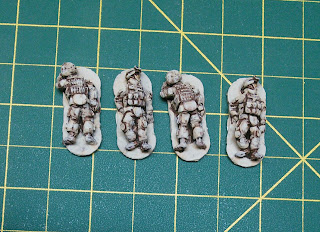 Since they come with decent stands cast on I didn't need to do any extra basing.

For the Afghan casualties I have these civilians: 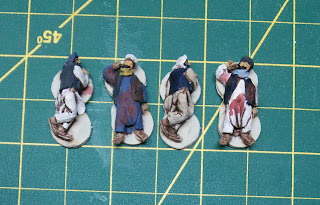 A runny daub of brick red for blood was used since the one sculpt has obvious holes in his shalwar kameez, but I didn't bother on the rest since I didn't want to get too ghoulish.

One of the features of Chain of Command and Fighting Season is the patrol phase which establishes the location of jump off points (or JOPs). The JOPs determine where your troops enter the table.

These can of course just be plain markers, but that wouldn't be very pretty. Dougie's Wargaming Blog and the Silver Whistle have both made attractive scenic items out of their JOPs. The weapons caches from S&S Models were a natural fit for the Taliban JOPs with AKs and RPGs on rugs hidden under tarps.

For the Canadian JOPs I used some left over stowage and a weapons cache that looked more "western". The piece with the map and radio handset put me in mind of a typical company or platoon command post. So I added a ruck and ground sheet to bulk it out.

For all if them I first glued fine sand onto a fender washer and let that dry before gluing on the pieces. I have found that doing the ground texture after makes such flat pieces look like they are sunk into the sand instead of sitting on top. After everything was primed it was a simple matter of painting and highlighting.

For the patrol markers I was thinking I'd just use individual riflemen instead of printing out Taliban and Canadian flags.

And here's a shot of the remainder of my Taliban coming along nicely: 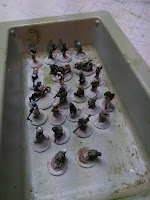 I am in my third week at the parts distribution warehouse. It's not that bad. The work is mostly OK, if somewhat dirty (I am sorting used returned parts), the people are fine and the 45 min drive through the country is OK for now. The money is slightly more than what I'd get on unemployment and a bit more than what I got at the Buy Food. The sad thing is though that it will never, ever be anything more. One woman has been there six years and still a temp without benefits. And how much does the warehouse pay the temp agency instead of increasing pay or adding benefits?

My job search was going to be low key for the summer. I am finding myself enjoying working straight days Monday to Friday and having real weekends (haven't had those in about six or seven years). Only working one job instead of job plus cadets plus J and M plus painting commissions is also pretty relaxing.

But a job application that I sent off weeks ago bore fruit and today I had a first interview with a well established, non-automotive local manufacturer and I thought it went well. The production supervisor has a daughter in cadets and loves the program, so hopefully that helped make a good impression! I hope to be called for a second interview next week. If I land this job I'll be making as much or more than I made in 2008 before the plant closed!

Also just as I was heading out the door another place that I'd applied to weeks ago called to set up an interview as well.

So good things on the horizon.
Posted by James at 5:40 PM 6 comments:

Got motivated this past week and finally finished gluing on the stowage to the other three LAVs and got them primed and painted.

I spent a lot of time pondering which bits of stowage to glue where. Maybe too long. But now they're done and I'm pretty happy with the results. 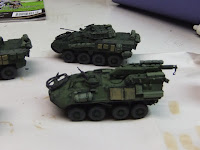 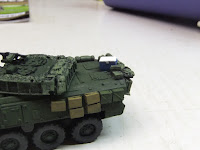 Done with dust dry brushed on:

I also finished off the 2nd Bison and Husky while working on the LAVs. I tried to be a bit more light handed with the dust this time:

And now some shots of the complete Battle Group so far. Complete until I can buy more. I'd like to add some Sappers and finish the platoon to bring it up to full strength.

I'm not sure what I did differently this time, but the colour came out much more true instead of the yellowish cast of my earlier post on the first Bison. I only cropped these shots, no colour editing at all.
Posted by James at 12:52 PM 7 comments: