Not a lot of progress lately.

I haven't done any painting since the last posting. Life has just been too busy.

But I did have a few hours one night in the basement and grabbing knife and hot glue gun I decided to start working on my modular boards for the underground asteroid/moon colony for my figures to start fighting in.

I got this far before the glue sticks and time ran out:

The base is a sheet of art board. I have covered it with some nylon window screening stuck down with spray glue to give some interest to the floor. Before the mesh went down I traced out a circle to make the launch bay. It was then a simple matter of cutting pieces of foam and hot glue gunning them into place, leaving a opening for the door. The foam is spray paint proof (I tested some last month) and has open cells which I think will give the idea of the walls being carved out of the rock. Beside the door there will also be rooms for security and customs. The heavy blast door itself will be made from foam core or heavy card and slotted into place.

As you can see it can accommodate a much bigger vessel than my tiny 4 seat launch.

The other news is last weekend I made introductions with Dick, a new gamer in town who holds promise of being a welcome reinforcement to my gaming circle. I had been put in contact with him over the summer via a mutual friend and then waited impatiently until he and his wife had moved. But he's here now and unpacking boxes. On Saturday I had him over for a small game of Dragon Rampant with Mikey. Dick took the elves, and got my new light spears bloodied but not routed and Mikey took the Orcs, getting my new goblin scouts shot to bits. He and Mikey got on, and I think Dick will enjoy our more laid-back friendly style of play.

I'm really enjoying painting these old Traveller figures from
RAFM, even if they do have a rather '70s or '80s vibe about them.

So here's what I've done so far. People in space suits: 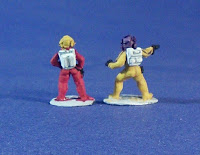 People without space suits for either shootouts on a colony world or the tunnels of an asteroid base:


Notice the big '80s hair on all the women.
This figure made me think of the bounty hunter in the final episode of Firefly: 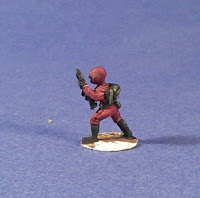 The ladies on either side are Falcon Figures from their "naked slave girl" pack. 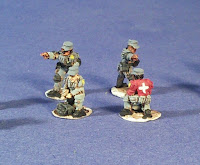 I still have to finish assembling the drone and the armoured carriers.
I also need to decide on a base colour. I'm thinking light grey.
I've also assembled a more complex building. This will be a hotel, brothel, restaurant, bar. "Best pie in the Outer Colonies!"

My friend Keith has access to a 3D printer and has been playing.
He's been designing ships for Full Thrust  and other accessories inspired by playing Imperial Assault.
At Kegscon I was able to pick up some prints  he did for me. A big spherical battleship and a bunch of spacey  looking shipping boxes and data modules. 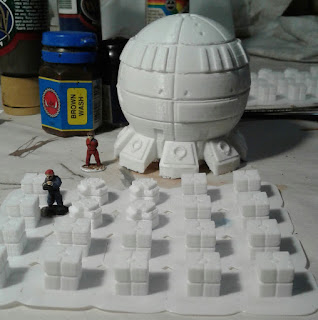 So here my blue suited cargo tech does inventory on the boxes and the red suited crew person demonstrates that the 'battleship' might make a nifty escape pod or landing boat for dropping marines on an asteroid.
Although Marines in power armour probably don't need a vehicle to drop onto  an asteroid with minimal gravity.
But you get my drift.
Posted by James at 11:02 PM No comments:

Bit of a SitRep and miscellany here.
Now that the cadet training year has kicked off it's been a blur with something every weekend.
Two weekends ago it was gliding. Beautiful weather and they all got up.

Last weekend I took them to the London International Air Show to watch jets zoom around and risk sun burn and heat stroke. Not a lot of vintage aircraft; a P-51, a DeHavilland Vampire, a replica MiG-15. But the USAF was there with lots, including about 6 of the new F-35s. One of which went up and was very fast. Here are some crappy pictures from my cell phone. I took a lot more of empty sky.

I've also been doing some more characters for my SF project. This time people not in space suits.


I put some signage on the workshop too. New Frontier Tools which is a pun on where I work. 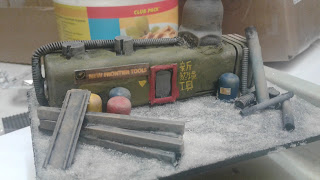 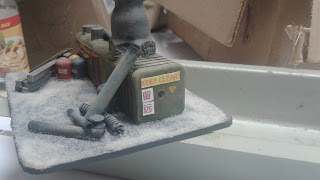 This weekend, if I hadn't already committed to running a game at KEGSCON, I would've been watching cadets go gliding again or supervising cadets getting lost in the woods on an orienteering competition (the first time the Squadron has sent a team to the Regional Orienteering Comp, so we win just by being there). But I was in darkest Kent County, enjoying KEGSCON while keeping in touch with doings via cell phone.

KEGSCON is a fun little games event in Chatham organized by a pair of friends, Keith and Brian. They had just over 60 people including about 20 for a Hobbit Strategy Battle Game tournament which featured some knock dead boards.

I ran my modern Afghanistan game. The Canadians were to enter the village, set up a perimeter, have a shura and sweep for weapons caches. Of course it all went pear shaped as the Taliban launched ambushes from the grape and pot fields to protect their local HQ and weapons caches.

The mission changed radically as one fire team got hammered pretty badly from their rear arc, taking 3 casualties. They dragged themselves into the courtyard of the local Taliban HQ but the lone soldier was busy patching wounds so he didn't look in any doors to see Afghans hurriedly burning papers and bundling up gear to escape.
The players had fun and my free kriegspiel Dungeon Master approach helped keep the tension on. But the 25mm cannon on the LAVs did the job and hammered the Taliban pretty badly. I also rolled poorly when I launched RPGs at the LAVs which didn't help.
Posted by James at 2:01 PM No comments: