Some nice random gifts of terrain from friends recently.
Don in sunny Las Vegas has been getting into 3D printing and sent me a box of trials. There are some misprints and a few pieces don't go together quite as intended, but free is nice. I've been waiting to get my recent game picked up so I could unpack the very big box and have a good fondle. 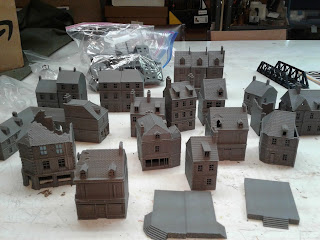 Some of the stl files that he is using have incredible detail. I could do with a nice Boulangerie. 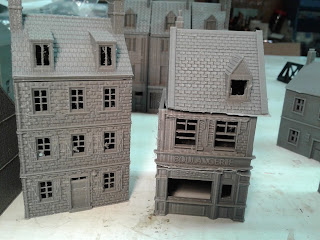 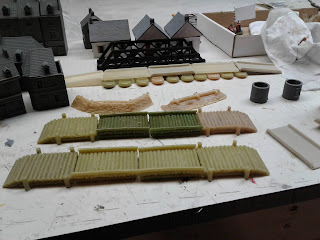 Three identical resin houses. I'm thinking with the addition of thatch to the rooftops, they might look good on the Russian Front. I need more Russian Front terrain. 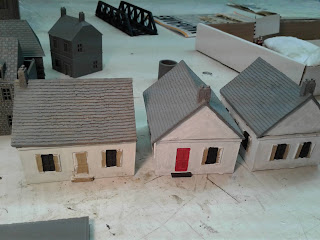 Another random gift was this nifty little marsh that Pasha Dan knocked up. I've been letting the water effects resin cure for a week before painting the reeds and flocking the edge. But a marsh has been on my to-do list for 30 years or so! Note 28mm figure. 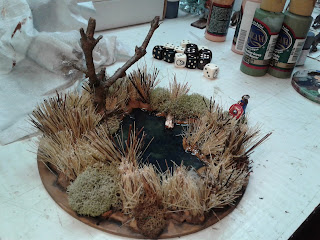 Final note,  I played in another remote game of What A Tanker on Friday night. I was victorious despite technical problems. Forced one PzIV to bail and then ran over the crew so they couldn't get off table and come back. Then got the kill shot on the last PzIV to win the game. 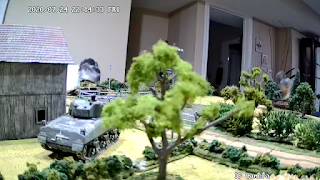 The Valley of Bitter Victory

I wanted to give Oathmark another try and get my Middle Earth on with elves doing something epic. I drew up 3000 point armies for each side. Evil got a Dragon (700 points!) and I made the Nazgûl a level 5 spellcaster, but I gave him some orc and goblin spells because they seemed more in line with the books. The Nazgul causing dread with Poison Cloud, Lifebane, Fear, Weakness or Afflict. The Elf spellcaster, was only level 4, but she got a magic ring that gave her an extra spell, which she used to cast Earthlines, giving her an extra spell casting die, effectively making her a budget level 5. Her other spells were Trueflight (shooting), Dispel, Confound and Mystic Shield.

The elves contained a lot of archers, even drafting in my old Ral Partha archers for a big 18 figure unit, which naturally performed quite well. Although the smaller 12 figure units did alright too. My 6 figure unit of super elite Elf cavalry could dish out a lot of hurt, but it was also very fragile. Of course the game, played out over a week, was cursed with many duff rolls. Orcs need a 10 to hit the elf cavalry? They roll 2 of them. Dragon breathes fire on elf shield wall, nothing but smoke.Nazgul gets ready to cast a  spell, fails his activation. Dragon runs away after being peppered by arrows? Orcs just shrug and keep advancing. 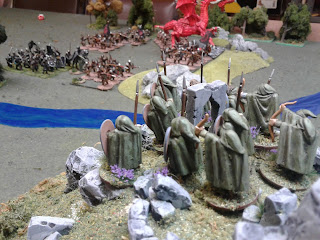 So some more thoughts:
The game was fun, but because I was playing solo I could fudge things. It might have been testing a live opponent's patience.
Posted by James at 3:59 PM 7 comments:

Discordant What a Tanker

I got invited to join in an trial remote game with friends in Chatham and Windsor (2 and 3 hours respectively distant from me). What a Tanker was selected as being fairly straight forward as a game for the experiment.

The host used a four camera security set up; two giving over views from each end of the table, one of a white board with our status and a fourth roving camera for point of view shots. We had to view these with the iSmKit media viewer app.


I tried to get a screen shot of the 4 in 1 view of all 4 cameras, but it didn't take for some reason. We were having frequent issues with different cameras going down and then coming back. Sometimes it was a different camera for different people.

For interaction and communication we all had to log into the Discord app. 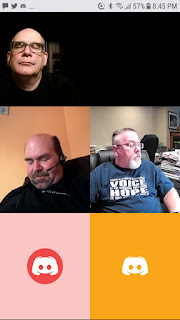 Discord wanted to keep freezing on me and we lost one player for a bit. The black square beside me was Keith who had microphone but no camera.

We were all using one device to view the table (for me my low end ELite Samsung tablet) and a second for communication (my low end Samsung phone propped on top of Mrs. Rabbitman's InstaPot so that people weren't staring up my nose). 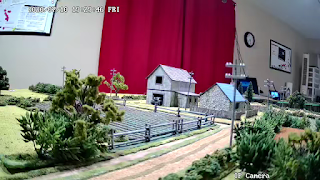 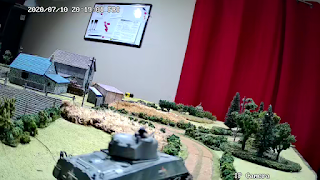 I set up a solo Middle Earth game at the end of June to give my new Rohirrim and my new magnetic bases a spin. The scenario: a village in the East March is under attack from a strong raiding force that has crossed the Anduin. The local Eorl rides to the rescue. I played it with Dragon Rampant using the "Sausages and Mustard" scenario from Lion Rampant. Victory points would be allocated to the orcs for each cottage looted and burned, and VPs to the Rohirrim for each cottage left standing. 25% of the Rohirrim got to start in the village as defenders, while the rest had to activate to march onto the table from the far corner. The orcs started with their whole force on table.


The game ended with a pretty easy victory for Rohan, making me think that maybe I should have given the orcs more troops to compensate for the armour bonus the villagers got from the hedge. I also decided that making the Rohirrim cavalry and the Eorl all Elite Riders, with a move activation of 7+, made them very hard to get going. I fought the entire battle with my foot as the cavalry and the Big Damn Hero all lagged far behind.
I then decided to refight the game using Oathmark. After sorting the army lists, I determined that the orcs needed two units of trolls to even up the points. I started it last Sunday, playing a few turns, but then there they sat all week and long weekend, waiting for me. One advantage to playing solo during a global pandemic is that no one is wanting to come set up a game. I had booked this Monday off as a holiday, so after a hot shower to clear my sinus headache I decended to the Basement o' Rabbits with a mug of tea to play out the game.


The Oathmark game was much more tense and dramatic, playing out the way I had hoped. I like the activation and the Command ability for leaders in Oathmark, but I suppose one could just remove the rule in Dragon Rampant that a failed activation ends your turn. The way champions work in Oathmark is nice too. They are part of units, but using a different coloured die means you can see what the champion is adding to the fight. The trolls were scary but not overpowering. Hitting them in the flank with heavy cavalry was devastating, but they still had 3 combat dice in defense and killed a rider.
So I think I'm coming around to Oathmark, at least for solo play. I kept my orcs and goblins in 3 ranks of 4 with spearmen in front and archers behind. So units had fewer shooting dice and slightly higher target numbers than if I had maximised the full multiple ranks of 5 in homogenous units as set out in the rules. But the Rohirrim also weren't maximised. The Riders only had 3 or 4 figure frontages. But with a Fight 3 and Charge 3 versus Defense 8 or 9 they didn't really need any rank bonuses.
I will continue my experiments with the Elves next and see how elite 6 figure units do against the 12 figure mobs of orcs.
Posted by James at 11:03 AM No comments: