Some Sharp Practice on the Frontier!

And I bet you'd thought I wasn't going to post about gaming anymore, didn't you?

Now that Cadets has wrapped up for the year, I managed to find both a free evening last night and a couple of my friends were available, so I set up a small Sharp Practice game. I haven't gotten any of my Napoleonic Russians painted yet, but I've been thinking that SP might also be jolly good for skirmishes on the Frontier. Get some real Boy's Adventure stuff going.

Now Richard Clarke maintains that Sharp Practice is for the muzzle loading black powder era; French and Indian Wars, Napoleonics and up to the American Civil War. Anything getting into breech loaders is stretching things a bit. But we're gamers and we always modify rules out of period don't we? (Witness all the Warhammer mods for WW2, Colonials, etc. etc.).

I haven't done too much really. British infantry with the breech loading rifles don't require an action to reload. I also treat them all as light infantry and use the light infantry with Minie rifle line for firing. The Pathans have generally poor fire discipline and since they are equipped with a mix of ancient jezzails to new breech loaders, I require them to spend an action reloading. Gurkhas are elite and aggressive. British and Indian infantry are Regular to Good. Highlanders are aggressive in fisticuffs. Haven't thought much about the Guides. Elite obviously, but I haven't decided on anything else for them.

So last night, Capt. Wooster of the Blandingshire Fusiliers, with some Gurkhas and an attached screw gun had to go visit a den of troublesome dacoits (bandits) and sort them out. Can't have them stealing sheep, kidnapping the daughters of tea merchants and generally upsetting the neighbourhood.

I only used about half of my table, giving me an area roughly 5'x5'. I thought maybe a smaller scene of action would get people stuck in faster and we might have a heroic storming of the native stronghold. The village and chief's tower were in the far corner. A river ran up one side through some rocky hills and jungle. Opposite the Imperial entry side was a long rocky hill and a dry stream bed.
The Imperial force came on in long skirmish lines (after I pointed out to Mike that his gaggling columns just wouldn't do); Blandingshires opposite the stream bed and Gurkhas facing the hill.
On the tribal blind card a couple of groups popped out to fire at the invading ferenghis. The lead company of the Blandingshires charged into the stream bed to bayonet the dacoits, while the Gurkhas stormed up the rocky hillside to overrun the sangar.


Patrick kept forgetting to activate his screw gun, even though the Gurkha captain was a level 4 Big Man and thus had loads of actions he could perform. So the gun only came into play on the last turn, firing one shot into the tower.
The Blandingshires sent one company to the left to pursue another group of dacoits sniping from some ancient ruins, while a second attacked the village and captured the camel stables in another round of fisticuffs. The Gurkhas meanwhile came down from their hill and stormed into the village from the other angle.

The first company of Blandingshires cleared the ruins and captured a hill on the edge of the jungle, but were then charged by a howling mass of tulwar wielding Ghazis. Despite their aggressive bonus, I rolled badly for the Ghazis and they were pushed back with a few martyrs and shock points.

They rallied a few turns later and charged into the flank of the third Blandingshire company hoping to drive it back from the village but with similar results.

That's where we left it, the Gurkhas and fusiliers were clearing the village and moving up to the tower supported by the now deployed screw gun. The chieftain decided to head for the hills.

Not bad, deploying the dacoits in small groups (6 figures vs. the Imperial 9 or 10) to make them more fragile and limiting the tribal command and control was quite effective.
Posted by James at 3:10 PM 5 comments:

Playing in the dirt with the Army Cadets

We try and do a year end trip to wrap up each training year with the cadets. As much fun as we can get within what's left of the budget, and maybe they can learn something too. This year we went to visit Robin Barker-James, a retired history teacher who has a barn full of artifacts and memorabilia (mostly WW1 era) near Tillsonburg ON, and he has taken to digging trenches in his fields for visiting school groups to get a bit of insight into the Western Front.


He has quite the varied menu of activities to choose from, so you can customize your visit to your group and their interests/strengths. He was also a drama/English lit teacher so school groups can do dramatics as well as trench raids, casualty clearing and battlefield archaeology. For some community service/team building and a re-enactment of WW1 Fatigue Parties, we helped him build a set for an upcoming drama group.


He also demonstrates the basics of bayonet drill (with a Ross rifle), and has some unique 'rock-paper-scissors' rules worked out so the kids can bayonet duel without actually coming into contact and knocking any one's teeth out with their wood and plastic tube dummy rifles.


We then moved onto some fun living history activities. This involved a lot of lobbing dummy grenades made from foam and duct tape at each other and generally having a good time. First they took turns clearing each other out of the village we had just built.


Then we had a couple of trench battles. The defenders had two bombs each and the attackers had two 'bombers' equipped with pails of bombs (about 2 dozen per pail) plus a Lewis gun. They quickly learned that with the bunkers, switchbacks and barricades, the bombs were the most useful weapon. When someone got eliminated they had to go to the end of the line, but slowly in each game the attackers worked their way down the trench, clearing each position. One battle, for a particularly large and complex trench system, bogged down when the attackers lost their bomb buckets to a lucky grenade throw! 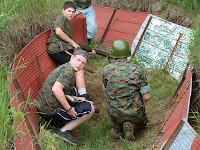 Then on Sunday after getting our tents dried out and folded up, the cadets did a bit of battlefield archaeology. Our host had buried some of his artifacts in dirt and the cadets got to go find them and then try and figure out the story they revealed. 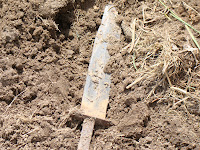 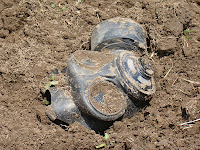 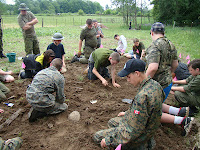 It was quite an enjoyable weekend and the cadets had a lot of fun playing what we used to call 'silly buggers' when I was a cadet. Even though I was standing up on the ground helping declare who was a casualty during the trench battles, I still got some interesting insights into trench warfare and it's unique difficulties and tactics required. So even though there wasn't any mud or rats or stink, the venue can still provide some good lessons into WW1.

To arrange your own visit, you can email Mr. Robin-Barker James at robin.barker-james@sympatico.ca.
Posted by James at 3:48 PM 1 comment: