I accompanied Mikey to a small game day in nearby Brantford last Saturday, Over the Top hosted by the Lords of the North game club. A dozen tables, maybe 60 people and a couple of dealers.

I wasn't running my game until after lunch so I prowled the hall checking out the games. A couple of guys with a very compact board did a hard sell on their game so I figured why not and got Keith and Barry to join me.

The game was 15mm, Soviet Airborne vs Mujahedin and used the Five Core rules from Nordic Weasel Press. Each of us ran a 5 figure section and a BMD IFV of Soviets. So a platoon in a tight urban area. 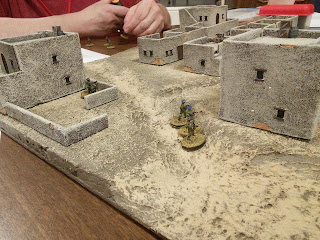 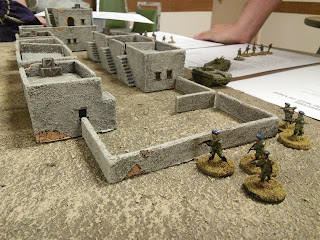 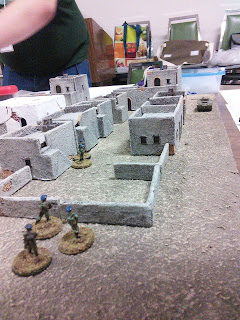 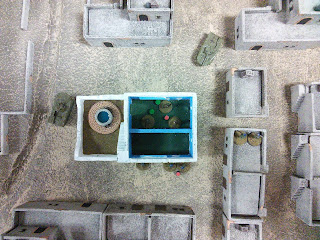 The game rattled along quite briskly and the game mechanics achieved battlefield friction, suppression and morale in very interesting ways with minimal dice rolling. I can see that after you memorise a few key things like how many dice each weapon uses, you wouldn't need to look anything up! I was quite impressed and am intrigued by the sound of the slightly bigger scoped No End in Sight, which says it will handle a platoon plus supports and emphasises the leaders and the stress of command.

The only drawback is that the rules are only in PDF format (available from Wargames Vault) and I find PDFs disappear into my hard drive or tablet to be forgotten!

Some other random pics from the show: 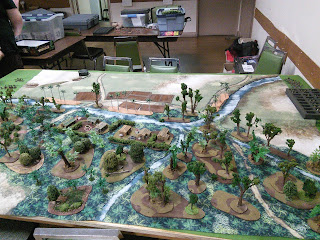 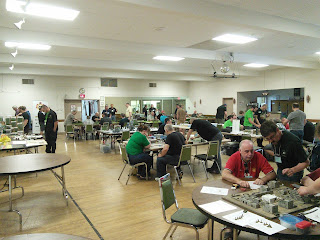 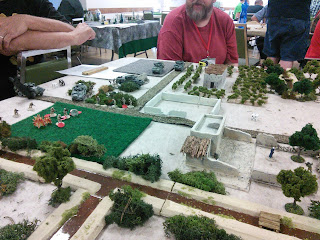 I used card activation this time which worked well. Still need to tweak it and think more on adding in a card for when other stuff like indirect fire or medevacs arrive. Since I was running the Taliban the Canadians did OK: two prisoners and no KIAs.
Posted by James at 10:07 AM 4 comments:

It is with some sadness that I report that Biggles, International Rabbit of Mystery, and the last of his warren, hopped off to join his ancestors last night.

10 weeks shy of his 10th birthday puts him somewhere around 90 human years. 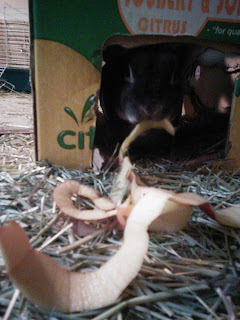 Most of pictures are from when he was young and more active. In his later years he'd spend his days in the box and wait for snacks, then go home to his cage when I'd show up for dinner.

The last 2 months though he's been slowing down and like a senior worried about the basement stairs, he wasn't leaving the cage. We did spoil him silly with the treats though. Half an apple? Branch off the apple tree? Even better (leaves and all, he happily stripped all the bark off).

Yesterday morning I gave him the stalk from some broccoli but after work I visited him and he'd fallen and couldn't get back up. 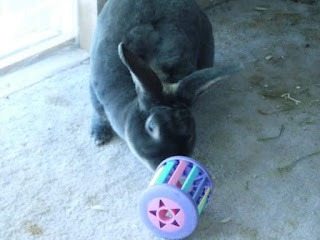 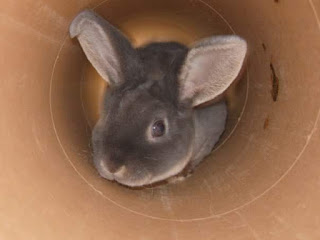 A bit of time with a knife, a file, and some green stuff and I've got this:


I'm not going to make a career as a sculptor but I'm pretty pleased. I'm not sure if this is more or less complicated than a head swap though.
Posted by James at 7:07 PM 1 comment:

Spent time with the Sharpulator and MS Word making up rosters for my North West Frontier troops, so I can do a proper game with force support options etc.

The following fits the predjudices I have formed from my own reading. Hopefully my math is correct. I did notice on the Sharpulator that groups armed with rifles were always one point less than groups armed with rifled muskets. I suppose he's meaning muzzling loading hunting rifles used by jaegers etc. So I used Rifled Muskets as the basis for the breech loader armed Imperial troops. But I think they're pretty expensive compared to the Pathans as is really.

Veteran troops, both native and British, have had service on the Frontier and have experienced officers and NCOs. Green British troops are just off the trooper from Portsmouth. Trained and disciplined, but lacking experience, especially among the officers and NCOs. They aren't acclimatised yet so don't Step Out etc. as easily. Green native troops are newly raised or Imperial Service troops from a friendly Raj.

British cavalry actually never served on the Frontier, but I included them for completeness and for later Boer War usage. Indian and British cavalry were using rifles by this time instead of carbines.

Here's my take on the Pathans. Even though many of them by the 1890s had breech loading rifles I figure lack of fire discipline would reduce the weight of musketry.

There we are. Just need to try out some proper games with force support options and a scenario.

Should figure out something for machine guns though.

Post Script: discussion generated by this on the Sharp Practice Facebook group has come up with the interesting idea to represent the Pathans as various types of skirmishing infantry (except the ghazis of course)
Posted by James at 2:18 PM 6 comments: