The Bodyguard of Bolg

Like all Servants of the Enemy, these hobgoblins have spent 20+ years hiding in a dusty box. But now, the Enemy is gathering his forces and they are ready to march to war! I thought I had sold them at a Hotlead bring and buy years ago, but now they are the new addition to my Legions of Angmar, the Bodyguard of Bolg.

This unit is described in The Hobbit as "goblins of huge size with scimitars of steel." Later during the Battle of Five Armies, Thorin and Company issue from the gate, driving deeply into the goblin ranks, becoming surrounded.


The bodyguard of Bolg came howling against them, and drove in upon their ranks like waves upon cliffs of sand. 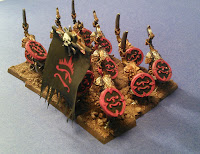 Since these fellows are bigger than my other orcs and looking more aggressive, they will be classed as Heavy Foot with the offensive upgrade.

I'm not sure what manufacture they are. A search of Black Tree and Harlequin doesn't turn them up. They came in a blister pack of 15 figures. But no matter, they are nice figures packed with detail. The extra Eyes of Mordor on belt buckles and shoulder guards gives them an elite look. The smaller shields and big scimitars and axes mean these guys want to charge in and break some heads. 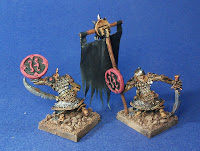 20 years ago my eldest daughter had done a good job of blocking in the main colours and she had already anticipated my preference for brown skinned goblins. So it was a simple matter of spending a few hours finishing up and tidying things then giving them a brown ink wash. I then went back and highlighted the red Eyes before basing and adding a banner.

At long last they are ready to take to the table and smash the Mad Padre's Riders of Rohan.

Edit: a fellow on the Facebook Dragon Rampant group identified these fellows as Scotia-Grendal models. Listed in their catalogue as "Orc Regiment." I must've gotten them second hand because I don't have a horn blower as shown in the catalogue listing.
Posted by James at 9:02 AM 7 comments: 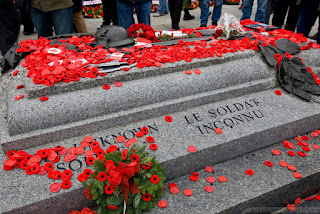 From The Ridgeway to the Panjwayi,


From a ridge called Vimy, to the beach at Dieppe,
From Paardeberg Drift to Kapyong
and all points in between,


My deepest gratitude and respect for those who answered our country's call.

One shelf (well not just one to be honest) in the Basement o'Rabbits has bugged me for a long time. Upper shelves were shallow card board boxes with 15mm WW2 troops, then a semi organized jumble of flocking, glues, jars of sand, boxes of useful bits, bases and washers for basing and other sundries.

Got some rolling stands with trays intended for scrap booking on sale and sorted all my 15mm SYW and WW2 troops into them, clearing off shelves so I could reorganize and tidy. Putting everything together and making things generally easier to find. Like I found some bits that will be useful for my space colony build!

On the bottom shelf, buried under another box and obscured by crap sitting in front was a dusty box labelled "kid's minis".

"What ho! What's this then?" I say to myself and take a peek. Bunch of half painted FRPG figures etc. But also these beauties: 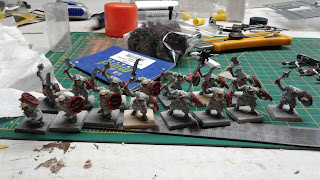 These are, I think, Black Tree Designs. They all have The Lidless Eye on their shields. So now the Witch King has a lovely company of heavy Uruks once I finish my daughter's painting.

I've also realized that I've got a lot of different types of flock and grades of sand!