Canadian Platoon for Chain of Command

In between bouts of poking the lawn mower at the weed meadow we call the lawn, I got these chaps done this weekend.

I had started them back in January or February, but vita interruptus et cetera.

15mm. Mostly Battlefront with some Old Glory added in to complete things (mostly Bren gunners, 2" mortars, no. 2s for the mortars and PIATs). These all came out of my extra lead pile. While I was painting Canadians I decided to do up enough extra 2" mortars and PIAT teams to be able to dismount the Carrier Platoon if I wished.

Leaders are on 20mm washers. Other ranks on 15mm round MDF laser cut bases from 4Ground. Bren, mortar and PIAT teams on Flames of War small bases.

Base coat of Tamiya XF-49 khaki, then flesh, the webbing was picked out with Americana craft paint khaki tan, rifles are brown and black. Boots black. Mortars and PIATs in Vallejo khaki grey. Then a coat of Army Painter dip and the camo on the helmet nest is highlighted in Vallejo green grey.

Of course I can use these as a fourth rifle platoon for my I Ain't Been Shot, Mum games as well, should I ever want to stage a battalion scale, two company frontage attack (most rifle companies by lat '43 in Italy or late '44 in NW Europe only being able to field two platoons on average).

Finally, a WIP shot of the painting area. My first buntai is getting ready to take on Mikey's sohei:

Last fall, a friend had us over to his house for a day of gaming and food for his birthday. Instead of giving him an addition to his lead pile I said "Pick out a unit, say 12 infantry or 6 cavalry, and I'll paint it up for your birthday".

He gave me a mixed bag of British and Russian Victorian-era commanders. So I've poked away at them in between other things like paying commissions and Hotlead over the winter and spring and have just gotten them done. So here they are. I'm quite happy with how the grey horses came out.


I comfort myself with the knowledge that they are done before his next birthday and they got painted faster than if he was to do them himself!
Posted by James at 5:17 PM 1 comment:

The General and the Faqir

The following is another installment in the highly irregular reminiscences of Brigadier General Pelham Gronville ("Plumy" to his friends) Wooster, VC, KCBE...

My old school friend Lord Englebert Chumleigh-Forstairs and his lovely wife Sara were visiting me at my bungalow in Simla during the hot season. I was telling Chummy about the hunting thereabouts when Sara noticed a rug on the veranda, where we were taking tea.

"Plumy, that is a lovely rug! Where ever did you get it?"

Good eye for the furnishings, our Sara. "Radu and I did a bit of shopping up country during the cold season. Radu spotted that and thought it would do nicely on the veranda here. Didn't you, Radu?"

Radu, my trusty Gurkha bat-man, was pouring the tea. "Oh indeed sahib. It was very nice of the Faqir to leave it behind for you."

Chummy was putting some jam on his scone and noticed Radu's slight smile. "Indeed? Sounds like there's a story behind it. Who's this chap leaving rugs laying about?"

"The Whosits of Whatsitsbad?" asks Sara.

"The Faqir of Fartibad. Sort of a holy man up the frontier. Just to the left of Pakhora, but if you get to Chiligrit, then you've gone too far and should turn about. Really, Chiligrit is such an unpleasant place one should turn about anyway."

"It was the usual nonsense, Chummy. This Faqir-chappie had his wind up about the Raj building railroads and telegraphs and whatnot and grumped about preaching jihad and generally making a nuisance of himself."

"So Delhi sent Jeeves and Radu and myself up there to give him a stern talking too and generally sort him out."

"Well, the Faqir bolted like a badger back into his hole of Fartibad, and gathered in Usman Khan and the tribesmen to help him out. He'd also gotten the Wazir of Pakhora to show up with some chaps right out of Arabian Nights. All flowing robes and spears and such."

"Usman Khan had his fellows well covered in rocks and jungle and anchored on either hand by a fort and a tower. So we just went in to dig them out with the bayonet!"

"The Sikhs opened the batting on the right by attacking some native Johnnies hiding among some rocks. This took quite a bit of effort actually"
"Then the Guides Cavalry made a long bowl up the center. Hallooing and whirling their sabers like fox-hunting dervishes."

"'Righto chaps! After them!' I shouted and lead the infantry up in support. Radu and myself were leading my old regiment, the Blandingshires to the left of the Gordon's."


"It was a bit of a go for the Gurkhas and Guides to clear the rocks in the center, while I set the Blandingshires to blaze away at the village."
"Then my blood froze as the gates of the fort swung open and a horde of tulwar whirling Ghazis rushed out, straight into our middles, screaming Allah Akbar! Their khyber knives thirsty for infidel blood."

Sara's eyes bugged out at this and she covered her gaping mouth. "Oh dear Plumy! Whatever did you do?"

"Well I only had time to say "Oh bother" to Radu when the gun commander slewed his screw guns about and gave them a blast of cannister! This sent the Ghazis packing."

"Although everything was going swimmingly in the center, it was a bit sticky on the right with the Sikhs and the Borsets on the left had gotten into a spot of bother. They had moved up the foot of a mountain when out boiled the Wazir's spearwallahs. Major Bearsham held them to it manfully, but eventually one company went down."

"The Sikhs drove out the Pathan skirmishes but they'd barely caught their breath when some chaps on horse back came at them. Fortunately, the rocks helped them from being ridden down but it was more to-ing and fro-ing with bayonets and tulwars. It was only the Madras Pioneers coming up to help that decided things."


"The good old Blandingshires and some Gurkhas cleared the village with vollies, bayonets and kukris. As we were generally clearing things up and securing the area, Radu had a bit of a poke about and came out of a mud hut with that very nice rug rolled up over his shoulder."

" 'I think this would be nice for your bungalow, General-Sahib' says he. Well, I find it generally best to leave my domestic arrangements in Radu's good hands, so there it is."

"After that it was just a matter of leaving the Pioneers to get on with reducing the forts while the tea was brewed,really."
This was a game I hosted last Saturday. It turned into an impromptu birthday party for me and the decision to have curry from our favourite Indian restaurant for the dinner decided the setting for our game of Black Powder. Patrick, Martin and Peter ran the Pathans, while the Made Padre, Scott and Mike ran the Imperial forces. I generally hosted and made mistakes about the rules. I really need some more tribesmen, and I really need to finish my Anglo-Indian casualty figures to mark hits.
Posted by James at 8:54 AM 4 comments:

One of the important visual identifiers of a Samurai army is the Mon, or heraldic badge that a lord would use to identify his troops and retainers. This would be displayed on the sashimonos, banners and even the helmets and breast plates of the ashigaru foot soldiers.

I could obviously copy a historic mon used by a famous daimyo ("great name" or warlord). But making up my own has greater appeal.

First I was thinking something based on cherry blossoms, referencing the infamous comparison between a samurai's life and the cherry blossom (both are beautiful and short). A Google image search began.

This graphic has several very cool, and very mon-like designs. But I worry the circles could be a total pain to do freehand over many dozens of banners. 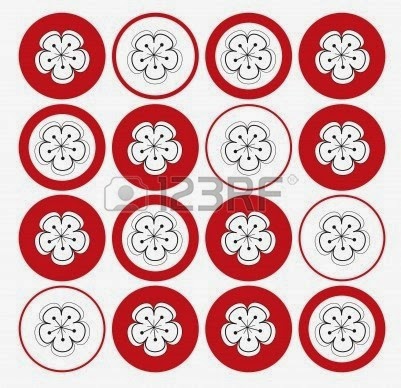 This would also be possible. A simple five-petaled flower (leaving out the stamens of course). Actually I'm pretty sure I've seen something similar in my copy of the Osprey Samurai Heraldry. 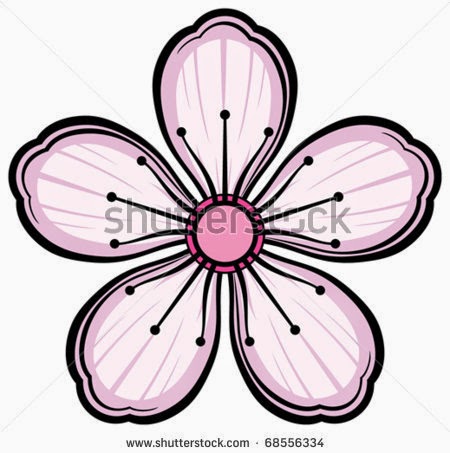 Then I thought something to do with tea would be good for a confirmed tea-addict like myself. The Chinese/Japanese character for tea is this: 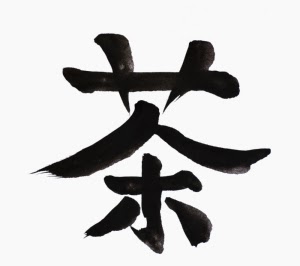 That could be fairly easy to execute and might look quite spiffy contained in a black box. Also sashimonos with script on them are very common in period paintings. It would be hard to do on a 28mm ashigaru's helmet however.
Posted by James at 9:55 AM No comments: