A Day of Lard

Canadian Lardies have been knocking about the idea of a Too Fat Lardies themed games day for a couple of years. Saturday one finally happened thanks to the efforts of Chris Robinson (@TheLegendaryNoiseMachine on Twitter) and Barnaby Ore.

The first Lard, Eh? was held in Hamilton at the Royal Hamilton Light Infantry Veterans Association hall, which is the same venue as the super fun Broadsword gaming days that I can never seem to get to because of scheduling conflicts.

I was happy to not pack a game and just pay my money and play, which gave me a chance to try Infamy, Infamy! in the morning and then O Group after lunch.

Some of the pictures are mine and some are reposted with permission from Barnaby. In all there were I think 10 games and 20-ish players, since a number of people canceled last minute over the weather (which did get ugly on my drive home). Which was too bad. If I'd known there was room I would have taken Weirdy Beardy along as co-pilot and navigator.

Infamy, Infamy! was quite interesting. A classic British tribesmen versus Romans scenario. Romans need to get the cattle they have collected as tribute off the table. British have taken issue with this. Barbarians getting to attack from ambush and being concerned about Fervor versus the Romans leveraging their drill and armour was quite interesting. 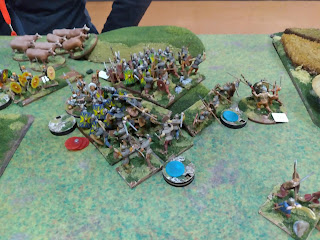 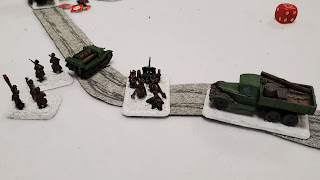 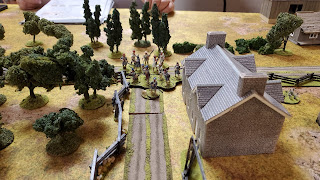 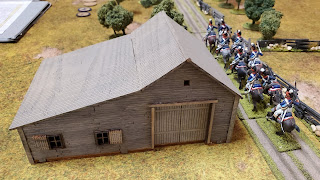 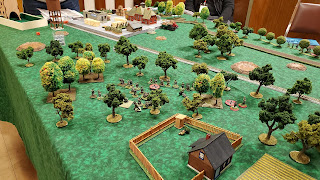 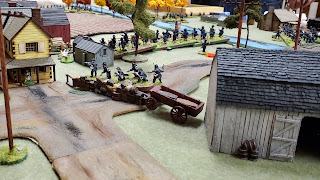 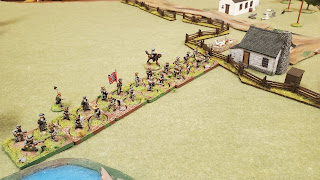 After lunch I got to play against the Mad Padre in a scenario set up by Brian using his 6mm collection. This was a historical scenario about the Algonquin Regiment's attack on Soitteville in August 1944. I'm trying to expand the bridgehead over the Seine and take Point 88 so that German FOOs will stop shelling the crossing points. Engineers haven't constructed a bridge or ferries yet, so I have no armoured support. I don't even have the battalion Carrier Platoon. 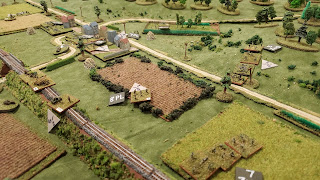 It was a fascinating game. Mike and I both felt like we were battalion commanders. But both noticed it was very easy to get sucked into the details of individual company firefights and throw all of your orders into those efforts and forget about the rest of your battle. I still had two companies to bring up, which once I remembered about them and got them forward I was able to extend my right and make Mike's position untenable.

I'd like to play more O Group. I just need people to play it with. It's a very different game which takes some thought to wrap your head around.

There was a curry dinner afterwards, but I was tired and wanted to be home. It was the best fun I've had for $10 in a long time. Plans are already being made for another one.

The Mad Padre's overview of the day is here.

Painting the 3d printed cars like a mad thing this week as I'd offered to run an 8 sided game of The Chicago Way at a friend's retirement party.
I tried various techniques to get some variations in colour. These were red air brush paint as a glaze over a red base and blue air brush paint over a light grey. 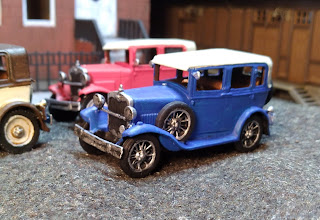 The green and the dark blue (2nd from left so dark it's almost black) cars are my first uses of contrast paints.

I'm becoming a fan of the 2 tone paint schemes. 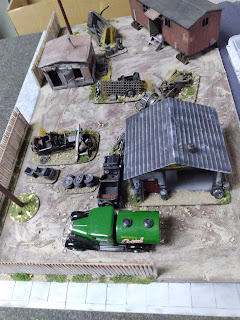 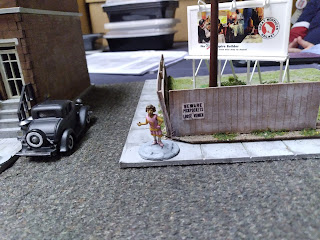 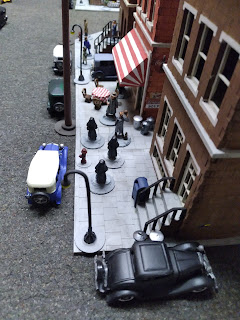 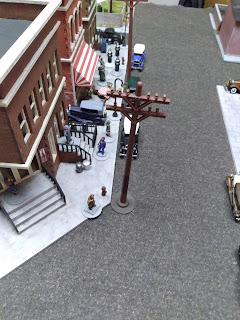 The new cars really helped Pottersville look the part. Although no one tried to drive one in game. 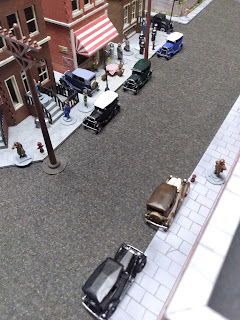 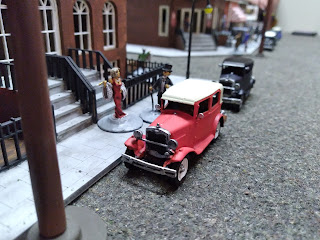 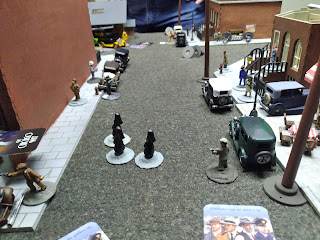 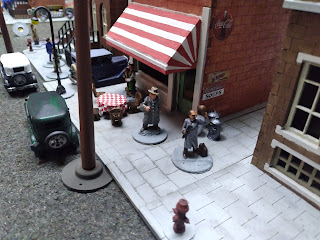 There was lots of carnage as they all tried to get The Golden Teapot of Petra. 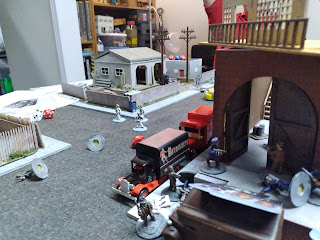 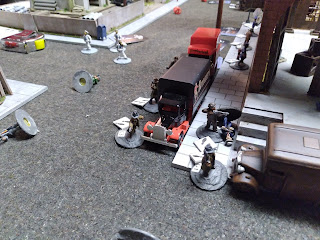 The until now unplayed Foreign Gentlemen gang all got gunned down in the street trying to escape with their ancient relic. 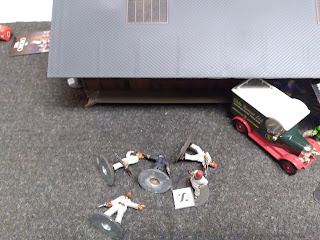 One player got distracted by fighting with my roving trio of nuns and even took a couple of hits from rulers before driving them away with Tommy Gun fire. 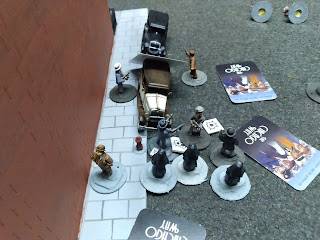 We also played a zombie game. Our host has a big zombie city layout. Everyone had to get down the board to the helicopter to escape.
There are some cute details. 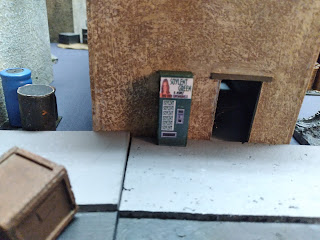 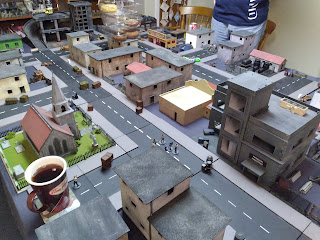 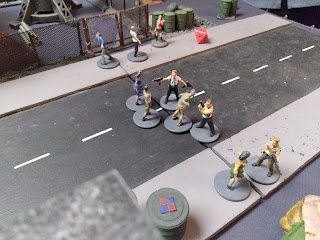 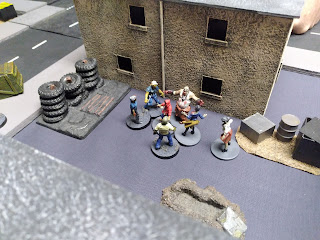 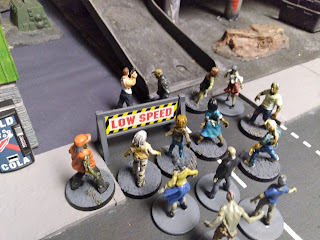 Nice use of the old Fisher Price garage. 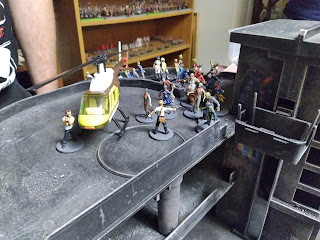 It was good to roll some dice and have a good chin wag and feed with a bunch of my best mates. It was also good to be drawn out of the hermit crab shell that I've noticed growing over me these last few months.
While I was painting this week I was listening to some New Wave. I'll leave you with this:
Gary Numan Cars 1979
Posted by James at 9:42 AM 8 comments: