My friend Scott got very excited by my 28mm Roman project. So excited he's been amassing an army of his own. I have to paint them though. He got himself a couple of the 30 figure box sets of plastic legionaries, so I thought I'd chronicle the painting of one of them. This photo essay is rather picture heavy, so I've made them all small to ease page loading. Click to enlarge.

I use a cutting mat and a plastic block to cut on. The block helps brace objects that won't lie flat. I also use a pair of clippers at times if the piece is fragile and the tension of using a knife will break it.

I remove all the pieces for one figure (and only one figure) at a time.

Then glue him together. Making sure I get the hand lined up with the grip on the shield. Some leave the shield off for painting, but I can't see the point of painting a bunch of stuff that is going to be behind the shield. I also worry that any paint will negatively affect the glue bond. A decent glue is really important. I like the ProWeld with the brush on applicator.

I noticed while I was painting that some of the bodies have empty scabbards. But in an effort to create some dynamic poses I was just looking at the position of legs and arms, so I have some chaps with pila and an empty scabbard and others thrusting with their gladius with another hilt in the scabbard. Oops.

The command group. The trumpeter and signifer were the hardest to assemble, trying to get both arms and the standard joined at the same time and the trumpet wanted to push the head off the shoulders of the figure.

I then glue everyone on to some scrap card for ease of handling (and to keep the light plastic figures from blowing away with the force of the spray) and white prime. I use a matte spray in the summer and in the winter I switch to brush on gesso.

Everyone is then given a heavy wash of burnt umber for a base coat. Notice I have now cut the strips of card apart for ease of painting.

Armour, weapons and edges of shields are then given a heavy dry brushing of pewter or gun metal.

Flesh is then blocked in, leaving recesses dark brown. I also block in the tunics. For this group I used raw linen for the legionaries and then red for the Centurion and his NCOs. You'll notice that this group includes two of Warlord's metal optios. My friend bought two blisters of these figures, so I added two in to round the group up to 32 figures.

I also painted the crests on the Centurion and Optios in the raw linen colour. I then started the bronze details. The discs on the cingulum (the dangly belt that protects the groin), decorations on some of the helmets, scabbard chapes, standards and the trumpet. I did a couple of helmets entirely in bronze just for variety. 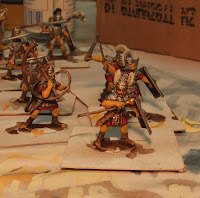 I do find it a bit of a shame that all of the heads are wearing the same pattern of helmet. A variety of helmet patterns would have been a nice detail and perhaps more accurate of how the Roman army looked.

Next I did the highlights on the red tunics. Here's the back of one of the optios showing the contrast and for a better idea here's a shot of my palette to show the contrasting shades I use. 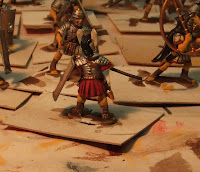 Next I ink any wooden bits (mostly the pila shafts) in brown and use black ink on the scabbards and the one optio's crest. I use some artists acrylic inks. I used to use Games Workshop inks but those have gone off the market and the artists inks are actually cheaper. I use the dropper to decant some ink into an old GW bottle for working with though.

I also use brown ink on the fur of the wolf pelts.

Leather brown is then applied to the wooden gladius hilts, sword belts and the straps of the Centurion's decorations.

The leather peturges on the Centurion,the cornicen and the signifer are then blocked in with raw linen. the Centurion's greaves and chest decorations are highlighted with silver.

After a tidy up of any paint slips the figures are ready for the dip. This time I brushed it on and kept a bottle of paint thinner handy to keep the brush clean. Much less mess and fuss than actually dipping. Although care still had to be taken to watch for where the dip wanted to collected and form droplets. In this instance it was in the lower inside corner of the shields.

I do like how the dip softens the edges of dry brushing and helps blend some tones together. It also creates a nice shading and highlighting effect on things like cloth folds. I also notice that it makes the bronze decorations on the helmets pop. 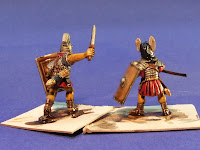 The Dip is also good for picking out those low relief details that just end up getting painted over (no matter how carefully you try and dry brush), like on the above optio's sword scabbard, helmet crests and the links on the belts.

Dipping is particularly well suited to low relief sculpts like the Warlord plastics and Peter Pig and Essex figures.

The observant among you will have noticed these lovelies lurking in the background in some of the shots. They're for me. A set of Warlord's Roman Slave Girls. I painted them up while I worked on Scott's legionaries. I don't have a Legate yet, but when I get one, he'll find the preatorium to be quite comfortable!
﻿