A couple of people left some nice, very complimentary comments on my Samurai post.

I tried moderating them using my shiny new whizzo tablet, and my fat finger hit 'delete' instead of 'publish' on the touch screen. There was no chance to undo. Oops.

And to answer the question, I can't remember what colour I used on the spear shafts. Some light woody brown and then the Army Painter Dip over top.

Fresh from the flocking bucket, here they are; my first buntai (or 'team') for taking on Weirdy-Beardy's warrior monks in games of Ronin.

They are all Perry miniatures, except this guy:

I'm not sure where he came from. I think somebody picked him up at a convention when I was first interested in doing Samurai several years back. But he came pre-primed and has been guarding the Samurai section of my bookshelf for these past years. I clipped him from his slotta-base tab and epoxied him to a washer. Even so he's still a bit bigger than the others so he will get any upgrades for size, strength and stamina. I've already called him "The Oni" or "The Ogre".

He is missing his sword and dagger, which were probably separate pieces. The antiquated armour was interesting to paint too. But it helps set him apart from the others in their black lacquered armour.

The commander of my force is this sword wielding fellow:

A late addition was this bannerman. Free-handing the three mons on the nobori was a challenge, but trying to line up three decals would have been just as awkward.

The core of the force is these four ashigaru with yari.

Fire support is provided by these two with bow and matchlock.

For my first division I've decided to take inspiration from the Typhoo tea packaging and go with black lacquered armour and red banners and sashimonos with the tea mon in white. Samurai get more personal choice in clothes, and I try to do some patterning. The ashigaru are all issued red clothes to emphasize the red theme. The yellow sashes will tie in with the planned second division, who will copy the Yorkshire tea packaging and have red lacquered armour over yellow clothes and yellow banners with the tea mon in black.
Posted by James at 5:44 PM 1 comment:

In February I treated myself and got 4Ground's Norman Farm Complex 15S-EAW-S2. I had hoped to have it done in time to display at the J&M booth at Hotlead, but it wasn't to be. I finally got inspired to get it finished this past week. I think because I've been pondering more 4Ground kits (both 15mm WW2 and 28mm Samurai buildings) and I thought "James, you really should finish that other big kit you've got yourself before buying even more..."

This is a big kit. You're putting together four good sized buildings, plus walls, the pig sty and dairy shed. I was going to photograph the unboxing, but my camera was dead at the time and I wanted to bash on with it. Budget at least 4 or 5 hobby nights; one for each barn, one for the pig shed, dairy shed and walls and two nights for the farm house.

Like all 4Ground kits, time spent in reconnaissance is never wasted. Dry fit first. Make sure you're putting things where they need to go. I almost glued the side wall on one barn backwards. Fortunately I caught it before the glue set. They also sorted a design error and included a replacement sprue of corner stones for the threshing barn and side pieces for the chimneys. So keep these in mind when building and don't be a daft git like me and use the other pieces first, get them stuck in and then say "Crap they don't fit! Oh wait a minute..."

The set comes with a bag of elastic bands to help hold things together while the glue sets and a few times in the instruction sheets it even stops to recommend you do this at certain stages. I also found those little spring clamps terribly handy. I've got a set of 6 and used them all at various times. I could have done with a few more even! A syringe to control the glue is also handy, that or a box of toothpicks. Keep a damp rag nearby to wipe up excess glue as well.

Here's the finished result. I've tried to be a bit different from the box cover and lay it out similar to the venerable Airfix Waterloo Farm set we all grew up with. 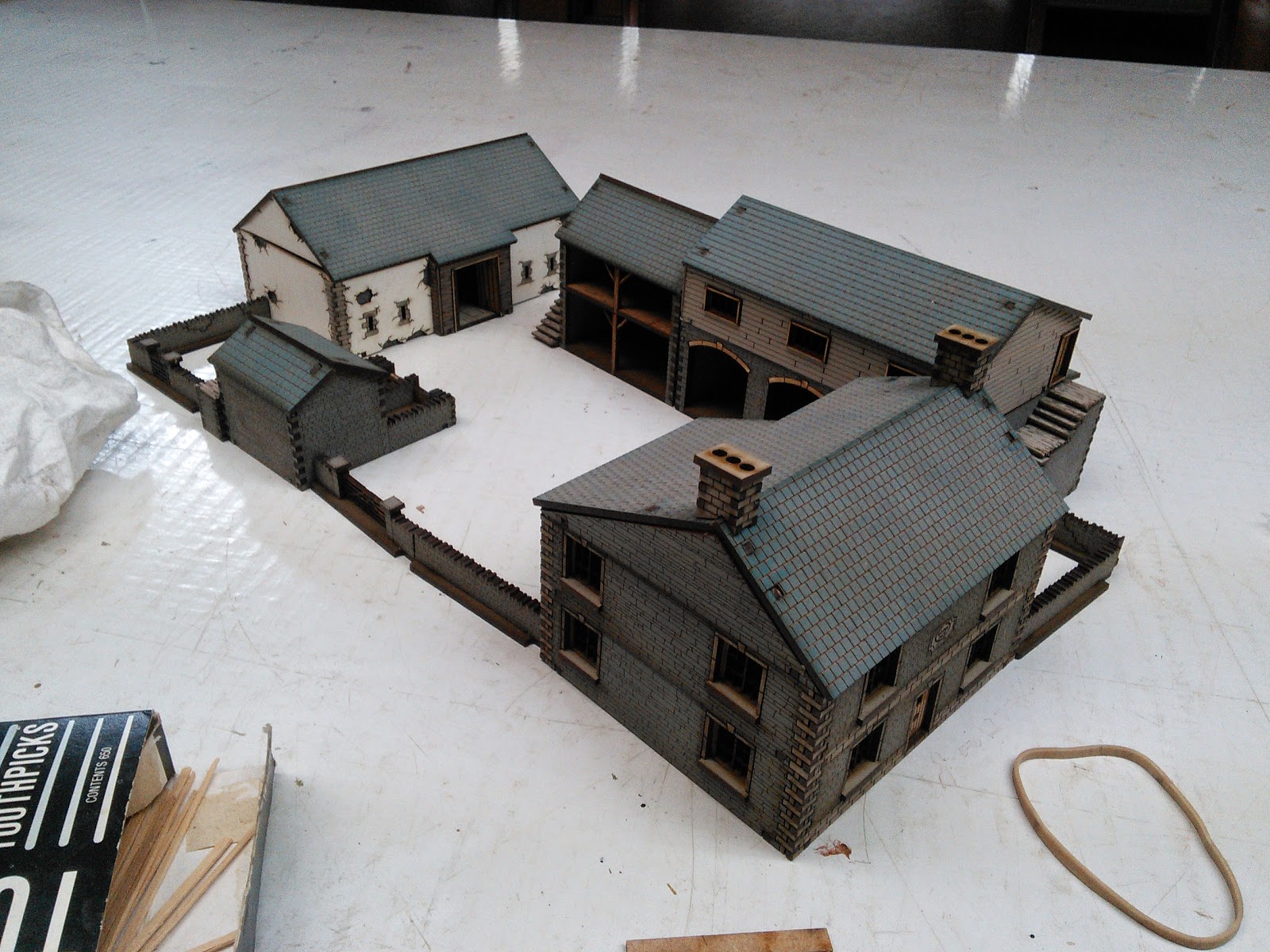 Some of the wall sections could be broken to be damaged, but I opted not to. I just need to glue some flock along the wall bases and maybe add a few tufts of flowers etc. 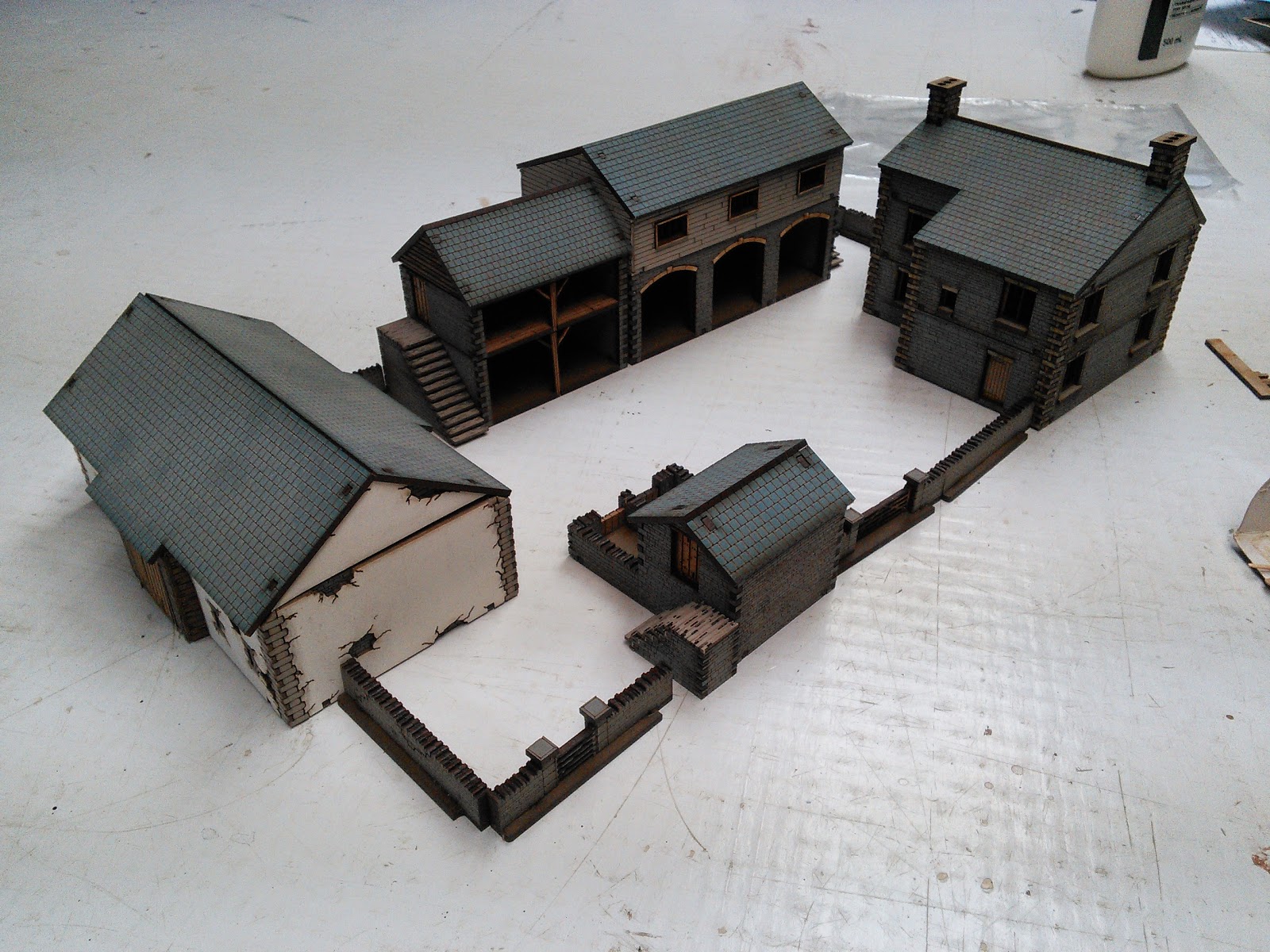 As an indicator of some of the detail, here are the rafters for the hay loft. I'm not sure why they put this design feature in. You won't see them during play. All the other roofs are built more conventionally and are strong enough. 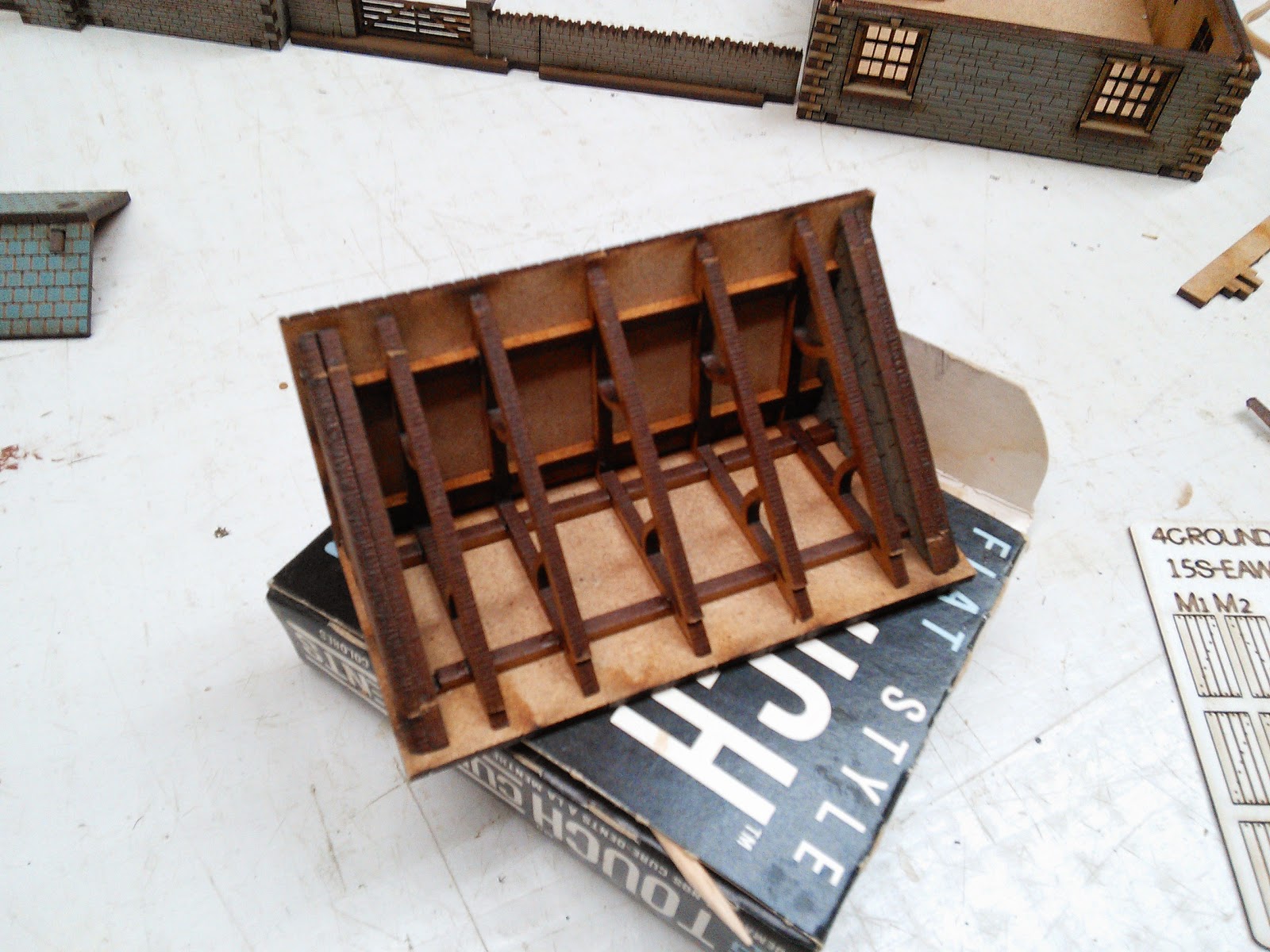 Of course, all the roofs and floors come apart for interior access. You can even hide some figures in the pig shed. Notice the floor detailing on the threshing barn (building in the top left corner). 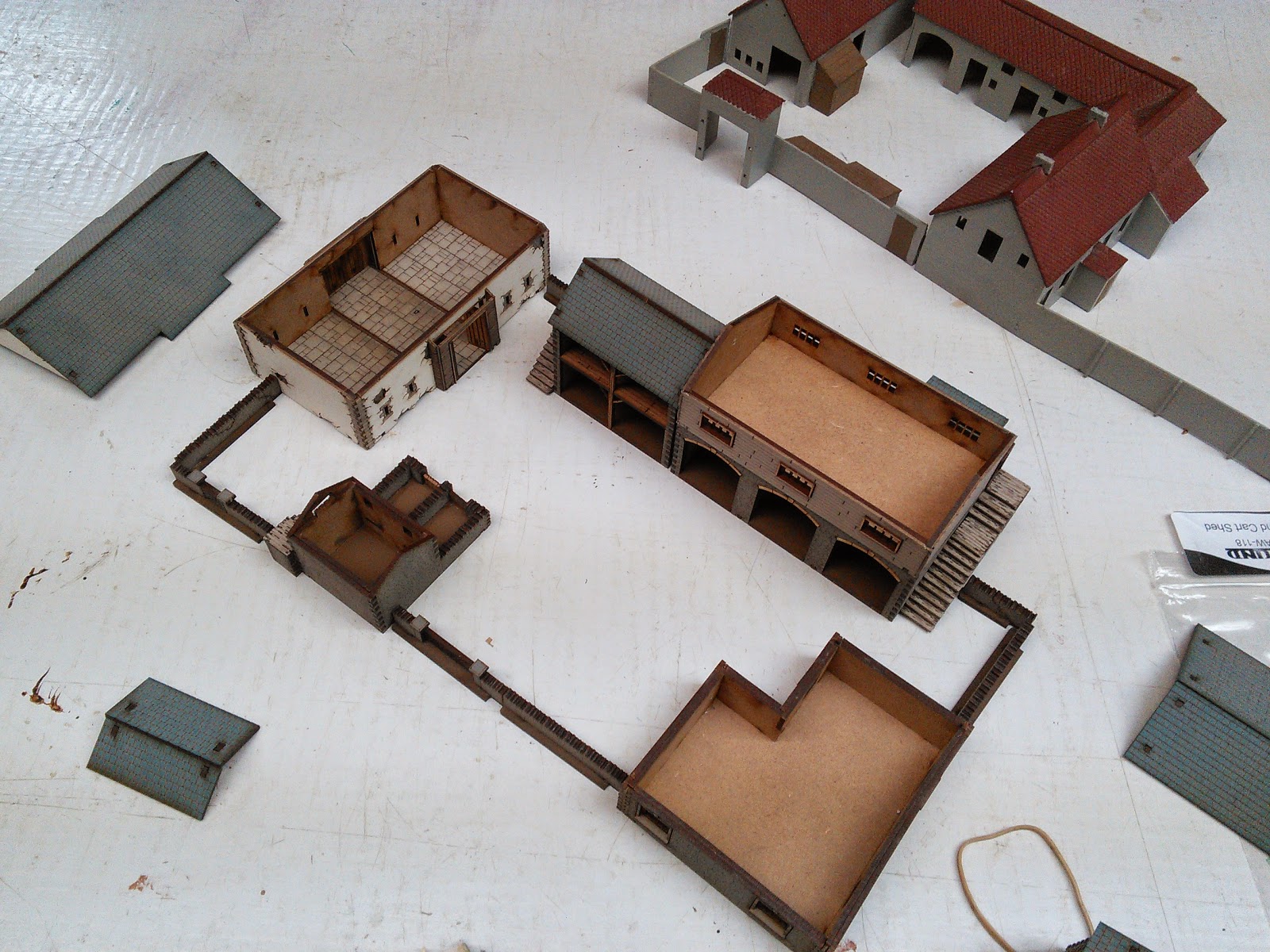 Here it is beside my old Airfix set to give an idea of scale. 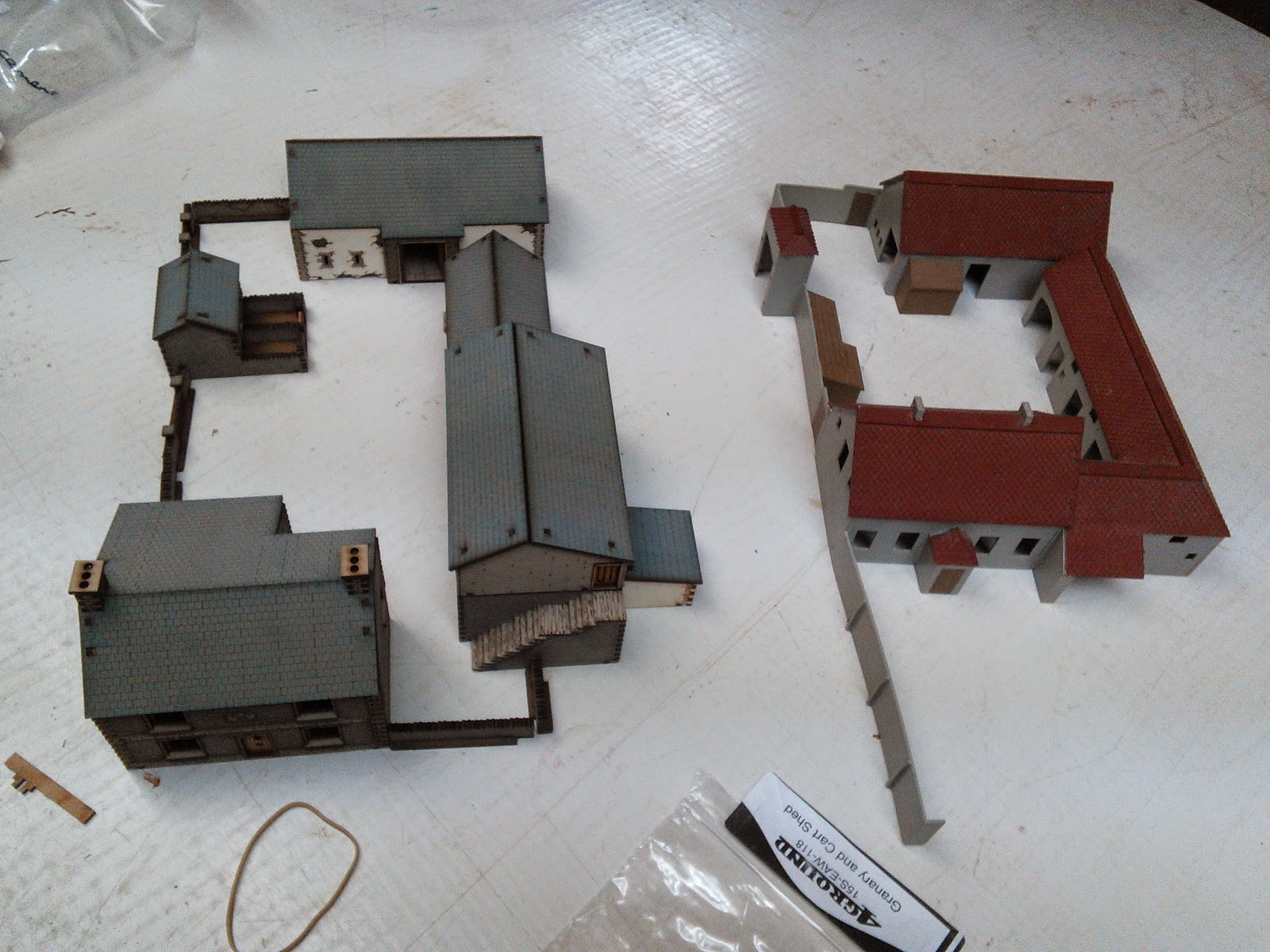 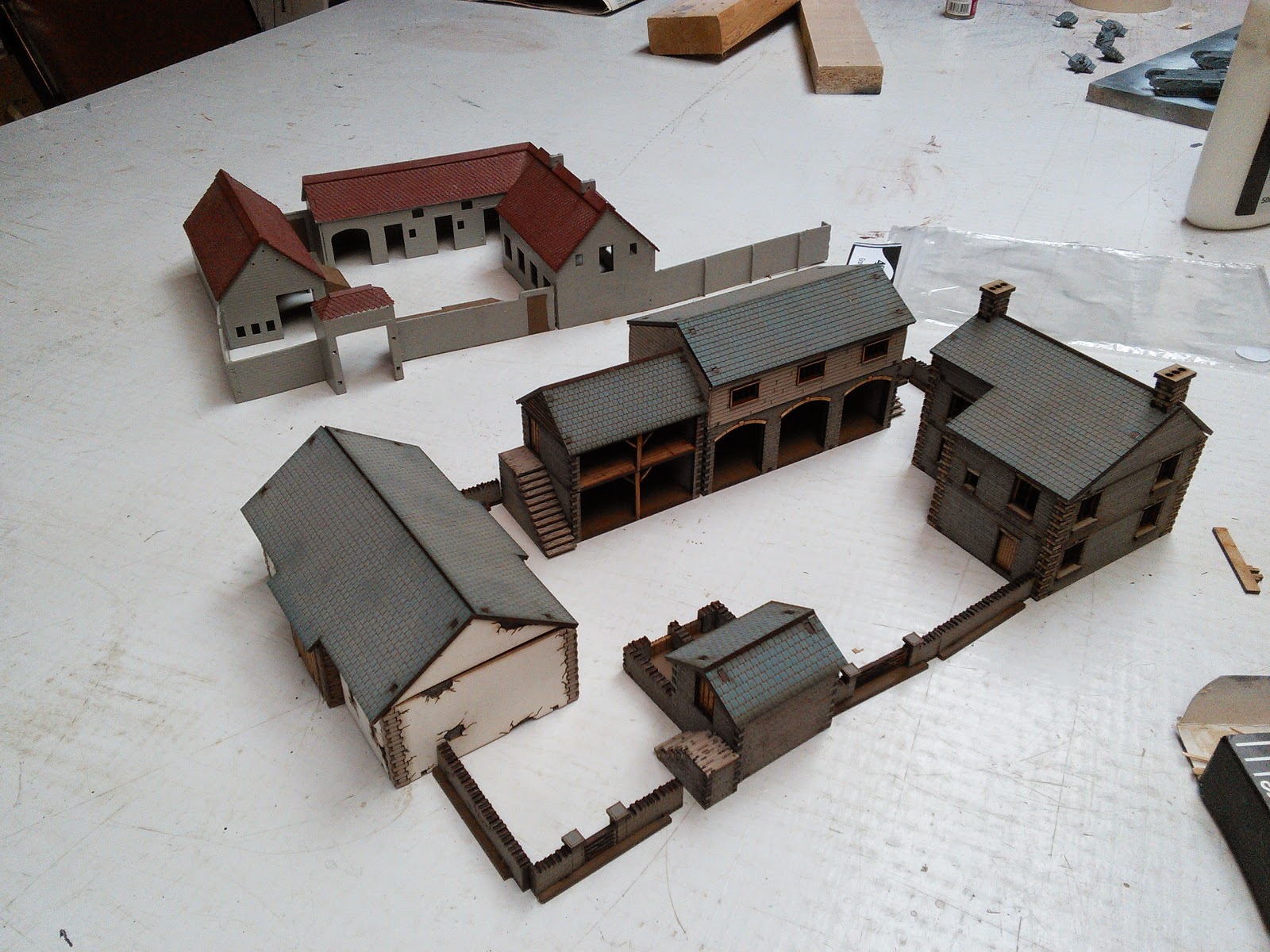 And I grabbed some figures to set around it to give an even better idea of size. 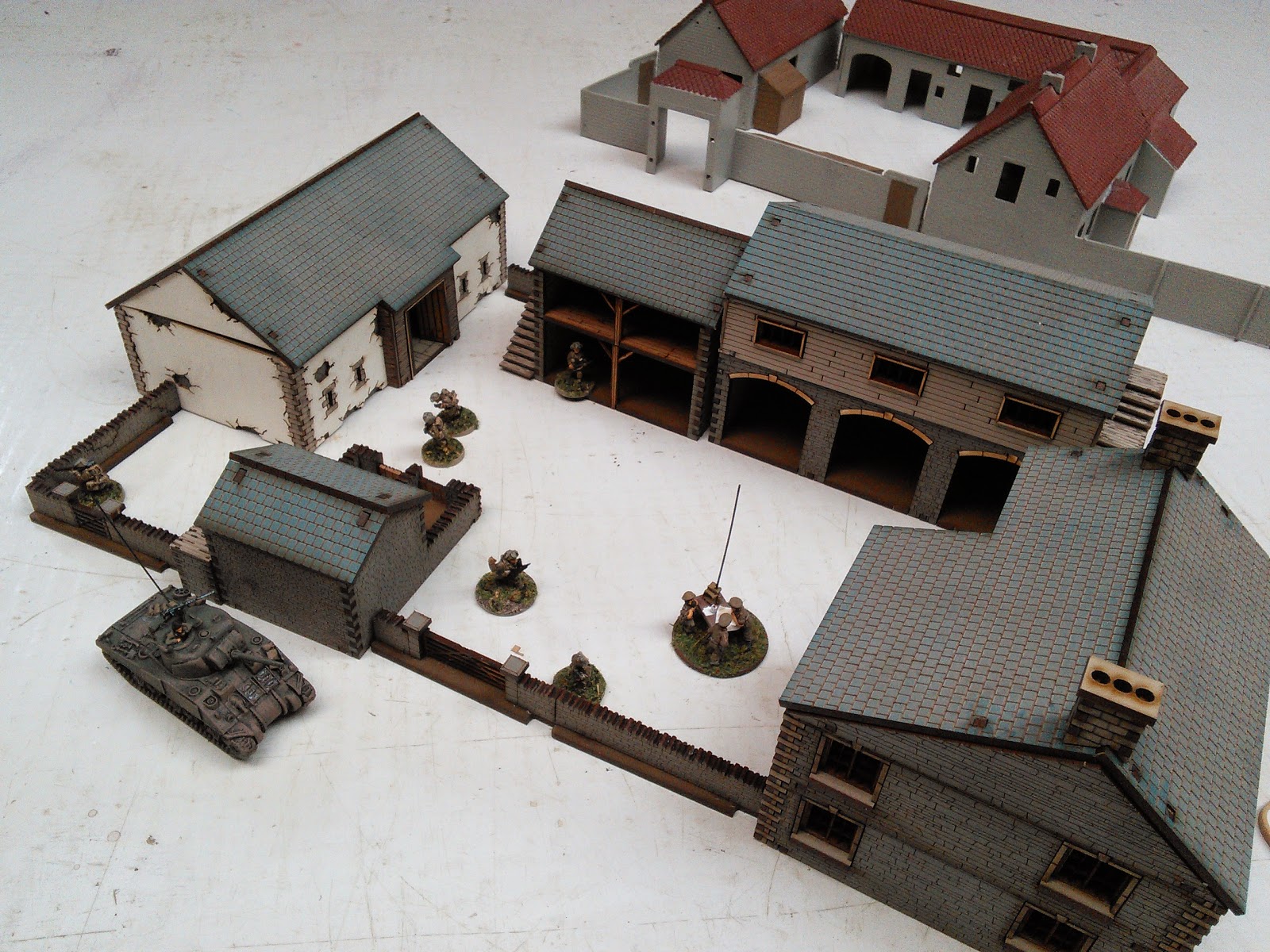 You can be certain this is going to feature as the focal point of my next several WW2 games. I'm even thinking of making it the objective for a Chain of Command campaign.

I am not a Luddite!

I have always had a love-hate relationship with technology.
My friends called me a Luddite.
The thing is though, I hate buggering about with it. I just want to get on with what I want to do. Back in the 90s of course it was far from easy. Computers were expensive, slow and required a lot of arcane skills, for limited utility.
Fortunately my friend Don dragged us into the computer age by giving me his old machines whenever he upgraded. Mockery helped too.
The much more intuitive iMacs and later Windows GUI (Graphic User Interface) operating systems helped people like me a lot. With eBooks, digital magazines and on line content becoming so dominant, I wanted something easier than a desk top PC to consume these. So lately I'be been staring longingly at tablet displays. But with our limited income of the past 6 years they've been a luxury.
But a few weeks back was my 50th birthday and the family decided to get me a tablet. So here I am, sitting on my recliner writing this on my spiffing new Asus Nexus 7! This tech upgrade in the basement of rabbits will I hope make things more accessible. I can have digital rules at the table. I can I hope be able to do image searches while painting, instead of running upstairs to the PC. I also plan to load all my cadet training manual PDFs onto it. Much easier to carry than 5x 4 inch thick binders or the slow and clunky army issue laptop!
In order to try something new; I will now use the built in camera to show you what I should be doing instead of buggering about with a shiny new piece of technology.

But I guess learning how to use my new toy is a good thing too. Better to know how to operate a digital tablet than a clay one!
Posted by James at 9:19 AM 5 comments:

Games I Will Probably Never Get Around To

Worked 22 hours of OT last week and it's 10 hour days this week too, so not a lot of painting getting done. But I can make another cup of tea and do some navel-gazing.

These past few years have forced me to do a lot of consolidating in my gaming I guess. I've pretty much decided that there are some periods which, as much as I'd like to do them, I will never get to for one reason or another.

Big battle Napoleonics. Love the look of these games. Love the history and uniforms and the tactics. Just not enough time. I probably should have started building my armies, oh.... about 30 years ago! Even in 6mm that's still a lot to paint. Even in 6mm with each stand of say 2 to 4 dozen figures deployed in a pleasing realistic formation with commanders and skirmish lines representing a brigade, that's still a lot figures! So I'll just have to get into big Napoleonic games at conventions. If I get my smaller focused Sharp Practice stuff done, I'll call it a win and move on.

WW1. The history is fascinating, but the terrain is the real key. To do the Western Front properly would mean an entirely new and dedicated set of terrain. I'm thinking of games like this: http://sidneyroundwood.blogspot.ca/2014/06/operation-gericht-at-partizan-2014.html
So as much as I'd like to explore the Canadian Expeditionary Force's exploits during the Great War on the table top, I think it's a non-starter.

Middle Earth. You'd think this would be a natural for a confirmed Hobbit-head like myself. Every time I reread Tolkien I start thinking about massed 15mm legions of goblins and phalanxes of elvish spearmen refighting the mighty battles of the First Age. My 15mm Goths could easily morph into Riders of Rohan. Byzantines for the Gondorians, Assyrians for the Southrons. ...And then I make myself a tea and stop. Every 15mm range of fantasy elf, goblin and dwarf I've seen out there is just way too spikey and silly. Plus fantasy gaming has been far too influenced by Warhammer. I'm sorry Dwarves do NOT get handguns, steam tanks or crossbows. So rather than get all anal with my friends and uptight about canon I'll stick to history. It's easier.

SF Fleets. Used too. Got broken by folks min-maxing the rules. Wasn't fun anymore. Sold off my fleets. Every once in a while I look at miniature listings and then stop myself.

Afghanistan. The only company that makes the proper vehicles to field a Canadian combat team (LAV III Kodiak, G-Wagon, Leopard 2A4) is GHQ. So yeah, you could do Operation Medusa and have half the Panjwayi on the table top, but the firefights would all be taking place in a 6 inch square as one platoon bumps the Taliban while the rest of the combat team is doing sweeps and blocking the enemy moves. If someone does the LAVIII in 15mm I could be tempted to convert modern US infantry into Canadians (at 15mm the differences are  so minute you wouldn't notice). But I'm not holding my breath.

Of course all of the above can change with changes to finances (win the lottery), serendipitous opportunities arising (I find a deal I can't refuse and have the cash to take advantage of it) or just a bump to the head. But for now, I'll just have to stay strong and resist and go paint Samurai.
Posted by James at 8:34 AM 1 comment: