Roll Out The Barrel! 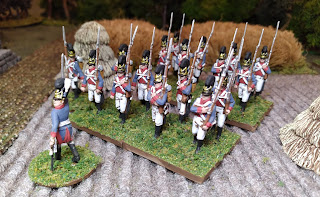 My first formation of Bavarians is done within a week of starting them!

This consists of two 8 figure groups and 2 Big Men, an officer and an NCO. 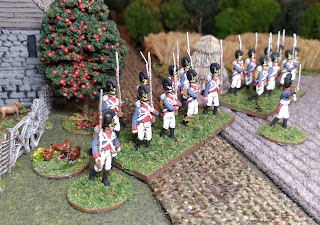 The Hät figures aren't terrific sculpts, there are some soft details, but the price can't be beat at less than Cdn$1/figure including shipping. So a quick and tidy paint job over my standard runny burnt umber base coat without any highlights etc. and done! Kinda took me back 40 years to my Airfix figures, except this time the paint won't flake off! 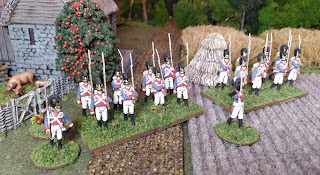 I found a shade of blue I liked. Lighter than the test figure, but darker than the sky blue in the Osprey. Happily it matches the shade of blue on my Bavarian flags, which is probably a good hint. I got the flags from Warflag.com. The blue I ended up using is an Americana craft acrylic appropriately named "Uniform Blue."

For the raupenhelm I used black ink for the leather helmet so it would contrast with the dull black woolen crest.

In Which Rabbitman Joins All the Cool Kids 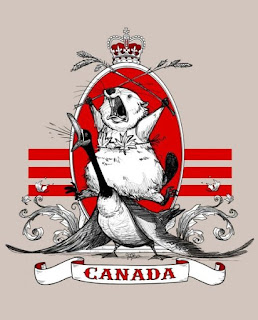 Part of what I like about the hobby is talking about it. So writing this blog and reading others is big to me, even if blogs seem to be dropping off in popularity.

And now the Mad Padre has roped me into being his co-host on The Canadian Wargamer Podcast. Like dice rolling Bob and Doug McKenzies we plan on exploring the Canadian wargaming scene and what makes it Canadian. Maybe it's just the prevalence of donuts and Tim Horton's coffee at games? Maybe something more significant? Hopefully we'll find out.

So far we've done two episodes. Our second features an interview with two-fisted sculptor Bob Murch and we talk about why Vikings are dicks.

The plan is to put out one episode a month and cast our steely journalistic gaze on every part of out vast country.

In Which Rabbitman Finds a Unicorn 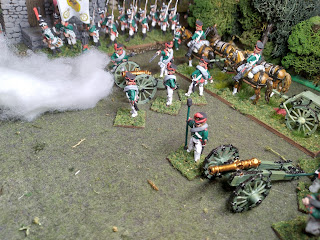 When I first played Napoleonics way back in the 70s and 80s, the Russian gun-howitzers were called licornes, which is the French translation of the Russian name Единорог, Yedinorog. They were called unicorns as a nod to General Shuvalov who overhauled the Russian artillery Corps in the mid-18th century and the new gun-howitzers that he championed had handles on the barrels in the shape of unicorns, because unicorns were on the Shuvalov family coat of arms. 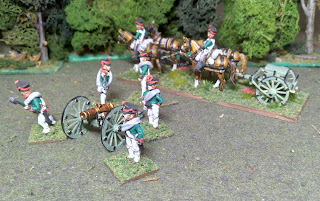 But I always saw them called licornes, perhaps because it sounded posher? Or we were all just taking ourselves far too seriously and felt that referring to the heavy howitzers as unicorns seemed a bit silly? 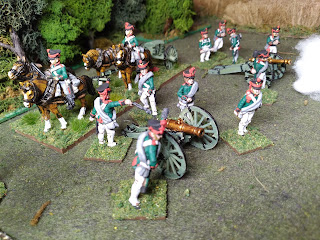 Either way, when I was ordering some bits and pieces to round out my Russians I just knew I had to have a unicorn! They are uniquely Russian, kind of nifty and my Russian force is big enough that I needed at least one more gun.

So during Monday's day off I painted the Perry Miniatures 10 pound unicorn and the limber. The limber came with an extra figure standing, so he made the fifth member of the gun crew. 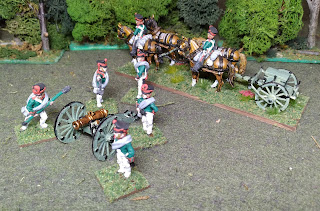 I like having limbers and since I can afford it, I've determined to have one limber for every 2 or 3 gun models. I might even get some caissons from Warbases this fall too. The limber was a bit of a bugger to assemble, and I ended up with parts glued to fingers. Patience really is the key and taking your time with each step instead of trying to assemble the model all at once. 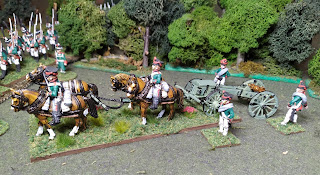 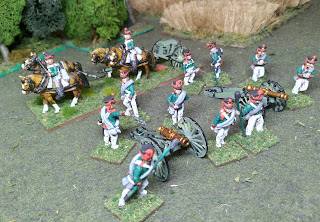 Took a Me Day today to decompress, unwind and hobby like a crazed hobbyist.

My goals for today were to finish my Napoleonic Russians and start my Bavarians, with an intermediate objective of building a small force so I can start actually playing Sharp Practice.

I got this box of Warlord Russian infantry almost 10 years ago, when Warlord sent me stuff to review. Of course they were never sending me stuff I was excited about so it's taken me this long to get them painted up. Obviously they've stopped sending me things to review since I wasn't a terribly fast painter. Unlike now with a Covid empty schedule and multiple nights a week to paint to my heart's content.

But here they are finally. The box has seven four-figure frames of plastic infantry with a choice of grenadier or musketeer heads. The packs and cartridge boxes are separate and you have to glue those on, giving better details, fixing a problem they had with the earlier Landwehr. But if you're going to assemble them as musketeers then you have to trim off two of the flames from the cartridge box plate which is molded with the three pointed grenadier badge. I couldn't be arsed to do that, and I like plumes, so I did them all as grenadiers. The figures themselves are nicely done with four variations to the march attack pose. The faces were particularly nice, although details at the sides of the head were a bit soft. 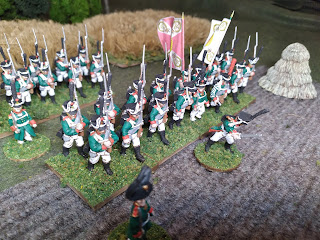 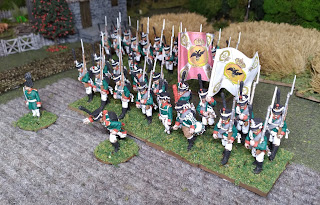 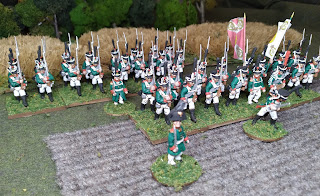 The metal command group comes with a few of options. You could assemble the drummer carrying his shako under arm for example. But I found some of the details on them rather rough and the drummer has incredibly long fingers on the hand steadying his drum! But you won't notice from 3 feet away. 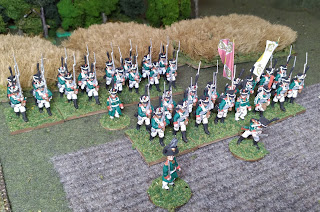 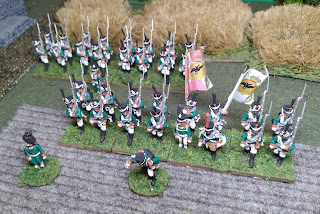 In this batch I added three more officers from the Big Bag of Second Hand Russians. I put one of them in the command stand, and then based the Warlord officer as a Big Man, since he's different and gives a bit of welcome variety to my Russian Big Men. I also think his charging forward pose is rather at odds with the rest of the box in an upright march attack position.

The flags are from the insert that came with the box, and they are actually for a Grenadier regiment! But don't ask me if the shoulder strap or facing colours are right for the Kiev Grenadiers, because again, I couldn't be arsed.

So 9 1/2 years to get them out of the box. 11 days from brown undercoat to flocked. Not bad. If I could've painted things that fast 10 years ago they might have kept bunging me freebies.

In between waiting for brown paint and flocking glue to dry on these fellows I got my Perry Miniatures 10 pounder unicorn and limber painted and ready to flock, and a nice starter force of Bavarians assembled and primed. But I'll post about those later.

When taking breaks from the painting bench I drank lots of tea and read Napoleon's Last Campaign in Germany 1813 by F. Loraine Petre.

Like Blücher arriving in the dusk at Plancenoit, the long anticipated pile of Prussians has arrived. 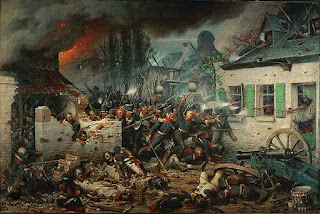 Scott has given me 2x boxes of the plastic musketeers, 3x guns and some mounted officers. 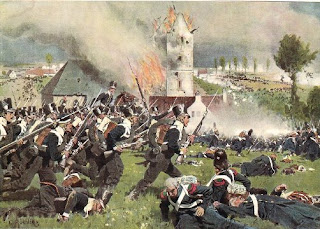 I jumped on a subsequent order with Scott to get the free shipping. I've added 4x extra command sprues and a limber. This means that I'll have lots of Big Men and enough command stands for 6 battalions when playing big battle rules. 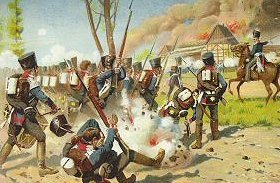 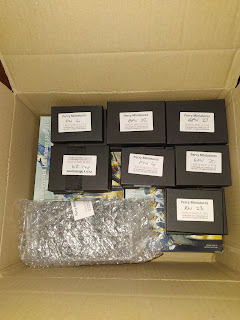 Apparently the thought about what shade of blue Bavarian coats were has changed over the years. 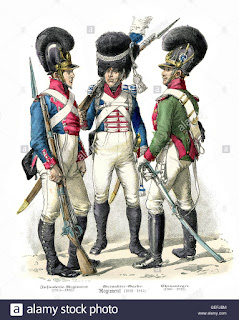 Traditionally the infantry have always been portrayed in sky blue coats. This is what I had always thought, having been fascinated by this picture of the Battle of Polotsk since I was a lad.

Of course you can't trust contemporary paintings in general history books either it seems. I've always liked this picture from the same book of a Bavarian dragoon threatening General Drouot at the Battle of Hanau (detail from a painting by Horace Vernet). 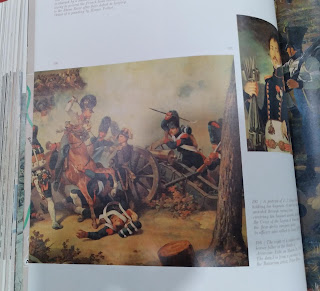 Lovely dramatic painting, but by 1813 the dragoon should be in a green coat. The white coat works though in the artistic use of light and dark, so I guess that's why Vernet did what he did.

These two paintings (Battles of Hanau and Polotsk) are also why I've always like Bavarians and find myself launching a whole new army of them, instead of buying easier to get, and possibly cheaper, and certainly more versatile, French.

Of course if you Google "cornflower blue" you get quite a range of shades. Newer thinking has the coats as a more "medium" blue. Perhaps the lighter shade is due to fading? Or people mistaking "sky blue" for something out of a baby's nursery? Sky blue is pretty variable too really if you just look up.

The Osprey is disappointing. It spends a lot of time on the Bavarian army of the Revolutionary wars and even devotes space and a colour plate to units that weren't formed until 1815. 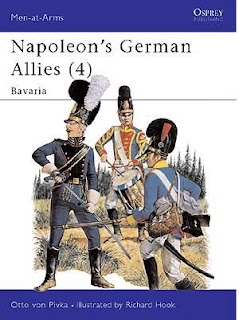 Bunde's book is what I was really hoping for, but at $51.00 a bit steep. fortunately, I know people who have it and are willing to share their research with me. 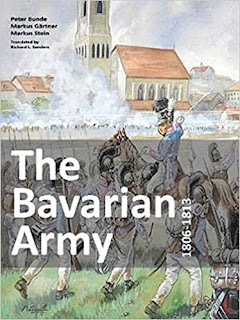 So what shade of blue? I did a test figure while prepping the last Russian Grenadiers. I used my Vallejo airbrush "French blue" over a brown undercoat and got this: 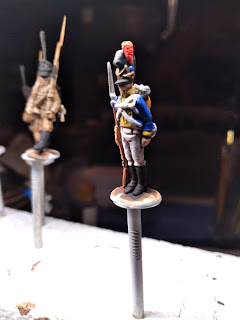 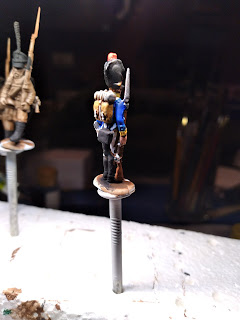 Good match to photos I've been sent of the plates in Bunde's book. So maybe this is what I'll go with. Also has the virtue of being reasonably easy.
Posted by James at 1:03 PM 2 comments: