Soldiers of the Queen-Empress part 2 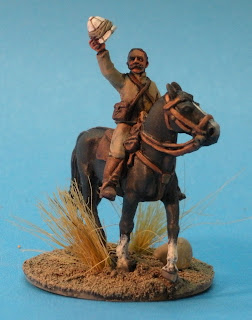 Now in Injia's sunny clime,
Where I used to spend my time
A-servin' of 'Er Majesty the Queen
-“Gunga Din” R. Kipling

I have a lot of infantry. But really, to try and cover the full spectacle of the British Imperial army you need a lot of different regiments to choose from. Or you end up deploying the same army every game. Which is boring. 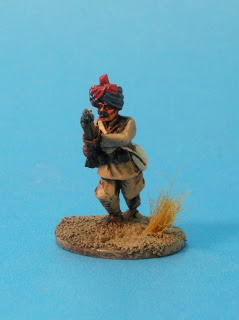 The Imperial army in India in the later 19th century was really made up of two components; the Indian Army and the British Army in India. After the Great Mutiny (1857-59) when the sepoy regiments of the Honourable East India Company mutinied, the British government took direct control of the Company territories and turned the Company native regiments into the Indian Army. British garrisons were increased to maintain a ratio of 3 or 4 native to 1 British regiment in the subcontinent. Before the Mutiny, the ratio was more like 10:1. 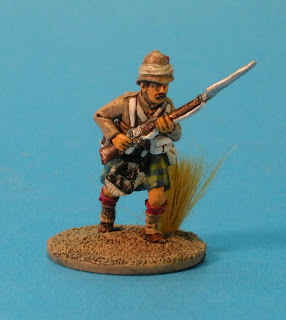 Obviously I need a lot of infantry: Sikhs, Guides, Gurkhas, Highlanders, the Rifle Brigade, plus regular old Tommy Aitkens and Johnny Sepoy. My first purchase was a bag of Old Glory "Sikhs Attacking w/Command". The 30 odd figure bag including an Indian officer, British officer, two buglers and two NCOs. The figure in the center is from the Foundry "Sikh and Guide Command" pack which I added later. 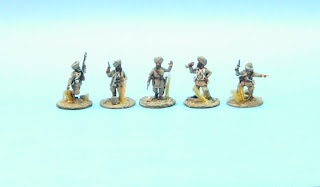 Here's one of the 12 figure companies I've divided them into. I hate leaving unused figures in the box, so I like rules that are more flexible in unit size (Or like Black Powder which don't care about number of figures at all): 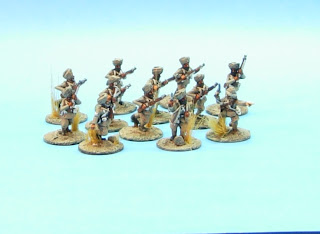 An action shot. One company up front skirmishing with one company formed up behind in support: 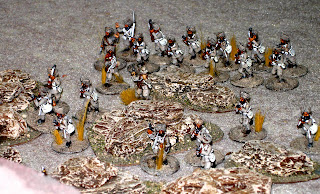 Of course after I painted them I learned that Indian regiments left their equipment brown. Oops.

I also did up a bag of Old Glory Indian infantry as the 1st Madras Pioneers. OG doesn't include command in the regular Indian infantry bags, and I wasn't going to buy a whole Command bag to get leaders for one 30 figure unit. But Peter found a couple of Foundry Indian officers at a Historicon flea-market for me and I added a couple of Indian buglers from Bicorne. According to the Osprey MAA#92 Indian Infantry Regiments 1860-1914 plate F1 the regiment served in Burma in 1886 wearing khaki and their colourful regimental turbans, this gave me an excuse to add a splash of colour into a sea of khaki.

Here's a couple of views of the turban: 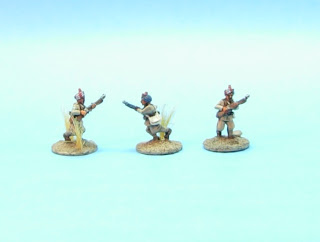 Here's one of the companies lead by a junior British officer: 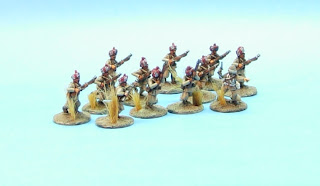 It would be nice if they had the proper sapper kit with picks and shovels carried on their backs, but no one makes those. I'm assuming that the entrenching gear has been left with the baggage for the battle.

Pride of place in my army is my detachment from the Corps of Guides. These tough frontier tribesmen were turned into the best regiment of the Raj. The Guides were so important to the defence of the North West Frontier that they were never sent anywhere else. Even during World War 2 they stayed on the Frontier. Raised by John Nicholson and Joe Lumsden after the 1st Sikh War they quickly proved their worth. The march to Delhi during the Mutiny and then the defence of the Kabul Residency in 1879 are just a few examples of their courage and loyalty. The Guides pioneered the use of kahki (from the Hindi word for 'dust') and saw constant action. Places in the regiment were highly sought after, so they had their pick of the best recruits, both Native and British. 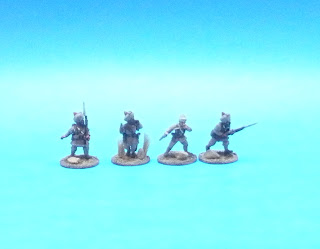 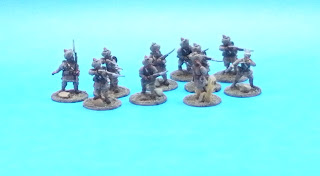 My Guides are Foundry figures and are wearing the poshteen or sheep skin coats used in the cold mountains. I'm not sure what's going on with the colour here, I was still learning the best lighting during this photo session obviously. A couple of packs of Foundry troops and the Command figures from the "Sikh & Guide Command" plus a British officer give me a detachment of 21 figures divided into 2 companies.

Now what would a British Indian army be without Gurkhas? Every Imperial Field Force needs at least one unit of these cheerfully fierce, tough little hillmen. Mine are from Foundry. 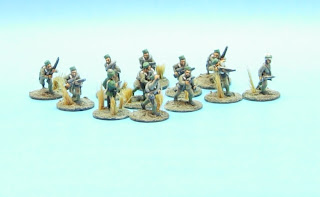 For their uniforms I mixed in a bit of green to the kahki to make them, well, more greenish. I also left their hats and puttees green to reinforce their rifle regiment heritage. 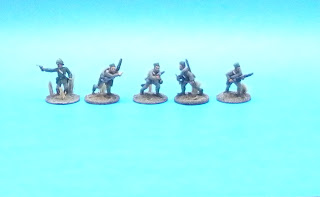 Here a comparison shot of the two British officers who lead them. The one on the left is from RAFM, the one on the right from Foundry. I thought having his sword out was more appropriate to leading my Gurkhas in a charge. 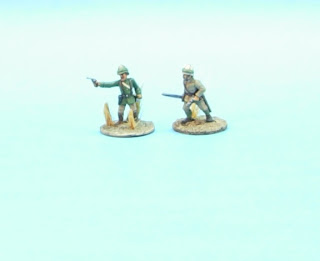 Here's a nice action shot of them clearing a village. This pic was used for the cover of my first issue of HMG Magazine as Editor. 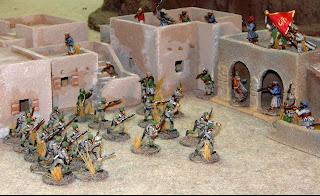 For British infantry I so far only have two units. One regular line regiment and one unit of Highlanders. The line battalion is from Bicorne and are in the 1898 kit used at the Battle of Omdurman. But the neck flaps were used in India as well, and I got them cheap from Don when he was briefly the American manufacturer for Bicorne. I have loads more primed and waiting paint so I'm going to do some with black equipment to represent the Rifle Brigade or King's Royal Rifle Corps. 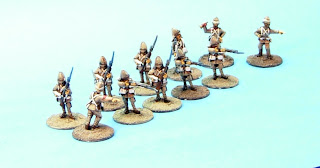 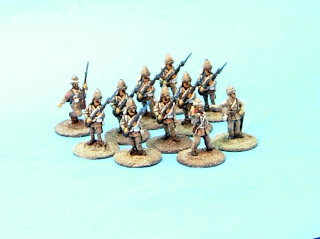 The command are a mix of Old Glory and Foundry.

Finally we come to the Highlanders. These were a gift from Peter and are Perry Miniatures. I love them. I took a long time over them and I think the kilts turned out quite nicely. I didn't bother with the narrow striping in the tartan, since that just muddies the effect and is a pain to try and do on the pleats anyway. 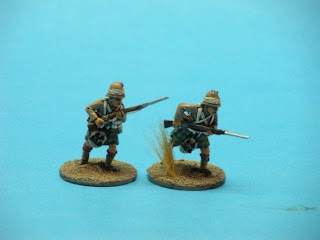 And here they are storming some sangars on the Frontier. Notice the subaltern leading the attack with his claymore and pistol: 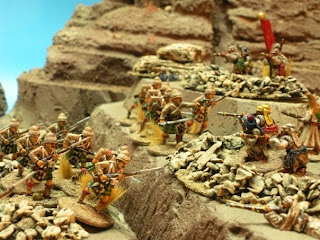 So that, so far is the main force of my Indian Army. Sometimes I group the Gurkhas and Guides into a Frontier Force brigade and then match one of my British units with one of the larger Native to give me three smallish 'brigades'. But not always.

For future painting I've got 30-odd Bicorne Indian infantry, some RAFM "Space 1889" British to give me one unit in the scarlet uniforms plus loads more Bicorne infantry (some of whom will become Rifles). Once I get some more Boers done and want to take my Colonial games to South Africa I'll need to replace the Indian troops with more British. I also have a small landing party of armed sailors in the 'waiting to get painted box,' so some infantry may get turned into Royal Marines too. I'm sure the mouth of the Kachumbar River is infested with pirates who will need to be burnt out. Or they can take on Patrick's Zanzibari slavers too.

Coming up next; artillery.

To see this army in action go to my previous post.

For Part 1-Cavalry go to my previous post.
Posted by James at 9:23 AM