Patrick, the Padre and Wierdy-Beardy came over last night so we could try Ronin finally.

Gamer megalomania struck and I've already broken the rules by having forces that are just too big. I seem to do that. :-\

But the Warrior Monks squared off against my troops for control of WB's resin aquarium bell tower that he picked up at the Cold Wars flea market. WB helped me run my bushi while Patrick and the Padre ran the monks.

Here I was worried about outnumbering Mikey's monks but the massive qualitative advantage means I need even more troops to take them on. All his sohei are equal to my samurai and he can field all sohei if he wants to (most of his collection are sohei, very few initiates or level 1 temple attendants). His initiates are slightly better than my ashigaru even! Yikes!

Ronin is a very gritty set of rules. There is a lot of dice rolling. The combat pool and using tokens to enhance attack and defense rolls are interesting. Trying to attack with mounted samurai is confusing and I'm still trying to sort it out. I know samurai weren't shock cavalry like western knights but still I don't think my lvl 4 samurai had a chance against the single monk he tried to ride down. Plus the way the rules are written it seems to say you can't run into combat (i.e. charge).

I like the detail for the heroes but for the masses of spear carriers there seems too much detail. These rules are definitely for a handful of figures fighting in a tea house or something. For bigger games I will need to look at something like Sharp Practice or Lion Rampant.
Posted by James at 11:27 AM 1 comment:

Had the guys over last night for our first attempt with Ronin (more of that later). Patrick brought me a couple of things:

A rather banged up metal LAV-25 and a die cast Buffalo mine clearing vehicle from the local discount retailer Giant Tiger.

The LAV is going to become an objective. The victim of an IED strike for Coalition troops to secure. The Buffalo is a bit small and missing part of its remote arm, but with a repaint it can lead my trucks and Bisons in convoy for the Taliban to ambush.

I just need Elheim to finish the modern Canadians!
Posted by James at 9:28 AM No comments:

Second Division for the Lord of Tea

This weekend I finished up some trial figures for the second division for my Samurai. Same mon, just different colours.

I picked a basic 100 pt. buntai for Ronin; two ashigaru with yari, one each with teppo and yumi and a katana wielding samurai to lead them. I was inspired by the Yorkshire tea 'special' box for the colours:

This time I opted for red lacquered armour and weapons with yellow clothes and sashimono. The samurai of course got more personal latitude in his clothing. 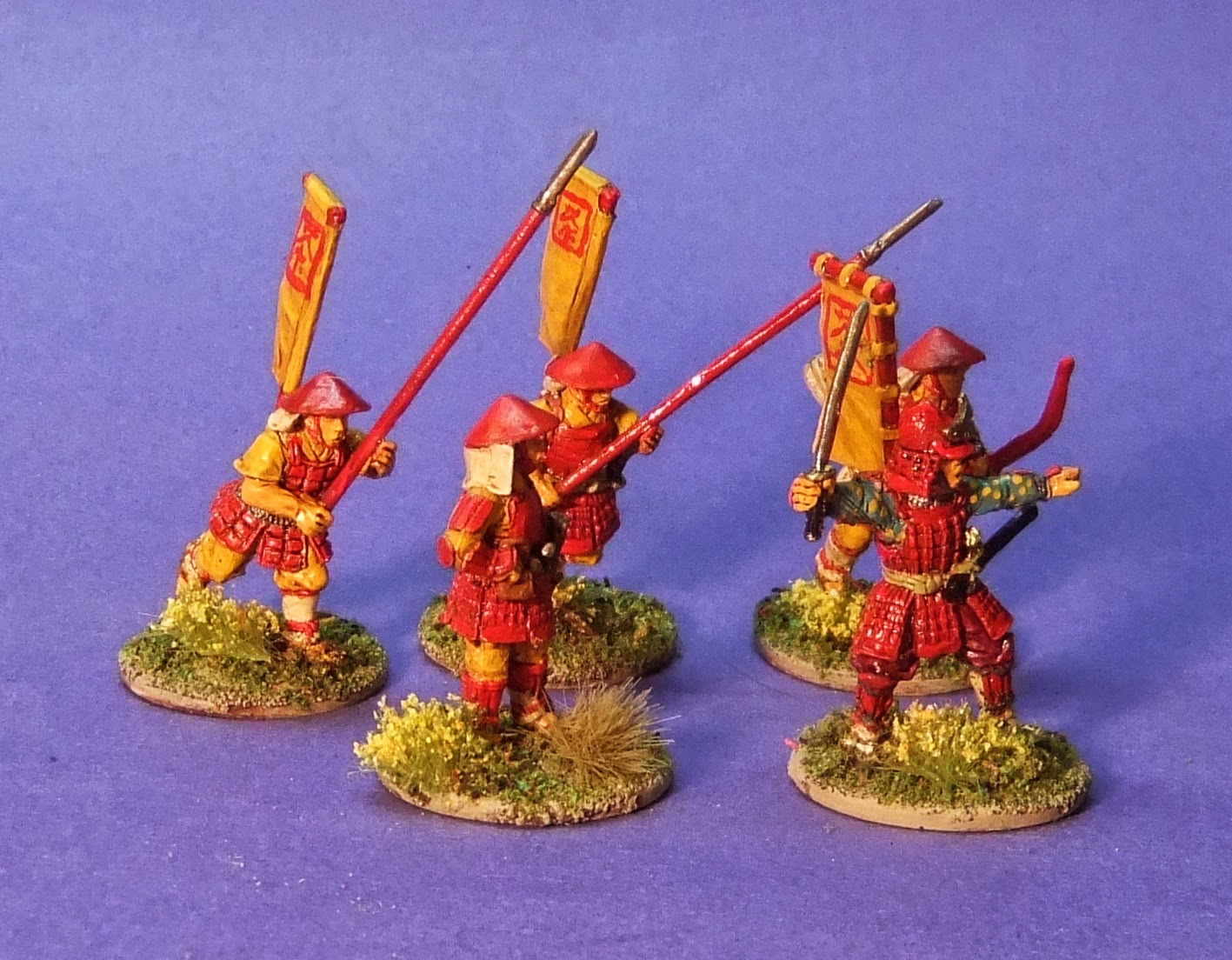 The clothes were painted with an ochre base then highlighted with yellow. The sash is a light green.

The armour was painted with a brick red base, primary red highlight and then a red glaze washed over top.
Everything else was blocked in and then I gave everything except the large armour sections a wash with Minwax Golden Oak to shade.
I almost ruined them. I put the final wash on Sunday morning and Sunday night they were dry to the touch so I painted the bases. I got excited and despite a little voice telling me to wait 24 hrs I added the flock being careful not to really dunk the figures in the tub like I usually do, and then one fell over, dumping excess flock all up his legs and onto his thigh armour! Flock was stuck everywhere!

So I waited until Monday and with a stiff brush I was able to remove the excess flock and I could add the flowers and tufts.

I like the combination, I'm pondering how to rework the yellow and red into the Lord of Tea's hatamoto (household troops).
Posted by James at 5:18 PM 4 comments:

Postman Pat brought a nice little box from Black Hat Miniatures containing a selection of their Ronin and armed peasant figures this week. These along with some Ikko-ikki and armed peasants from the Perrys will be used to make a bandit, peasant rebel or Ikko-ikki force to provide an in-house opponent for the Lord of Tea. Or in big battles they are a ready, and expendable, allied contingent. Assuming that is, that I ever find an opposing army of samurai big enough that I require reinforcements.

So I ordered one bag (3 figures per bag) each of Ronin with bow, naginata, yari, katana and no-dachi (big, two handed sword) and four bags of the peasants with bamboo spears, so there'd be enough of them to make a unit/band/mob. So all of my ronin/bandits will be unique figures which suits the irregular aesthetic for such a force

The peasants with bamboo spears have three different figures (one each per bag). They are one piece castings and were pretty good to clean up except for some heavy flash around the ends of the bamboo spears. The bamboo spears are nicely done though. I'm thinking about giving one of them an Ikko-ikki banner.

The Ronin are all unique figures, wearing an assortment of heavy but old-fashioned laced armour, some newer helmets, lighter armour or no armour at all.

The katana armed Ronin had their swords cast onto arms that needed attaching at the shoulders.

The no-dachi Ronin on the left of the picture, who I think looks pretty cool and might become the captain of my band has both hands cast onto the handle of the sword and then you glue the hands onto the wrists. Well, while I was cleaning up some flash the sword handle snapped. So instead of a reasonably straight forward glue job, I now had three pieces to attach to each other, one of them quite small. I also had to be careful to make sure both hands lined up properly so the samurai wouldn't be holding a bent-handled two-handed sword! I think I succeeded.

The naginata were also surprisingly difficult to glue. Mainly just trouble getting a good bond, even with gel superglue. As you can see they gave me three sprues of naginata, so I could have my choice of arming each with a slightly different weapon or arming them identically.

So far this spring I've been stupidly busy on all the nice days, and when I've had hobby time it's been wretchedly cold (even snowing). But this weekend is forecast to provide some fine weather for spray priming, so I can get these chaps and my Museum Miniatures baggage train ready to paint. There's a little one day convention in June that J&M is going to be at, and I'd like to run a game of Ronin if I can. I haven't GMed at a show in a long time!
Posted by James at 6:39 PM 2 comments:

Spent some time yesterday and this afternoon assembling my S &S Models buys that I picked up at Hotlead and gluing stowage onto my Canadian AFVs.

I have now accumulated an impressive selection of stowage: 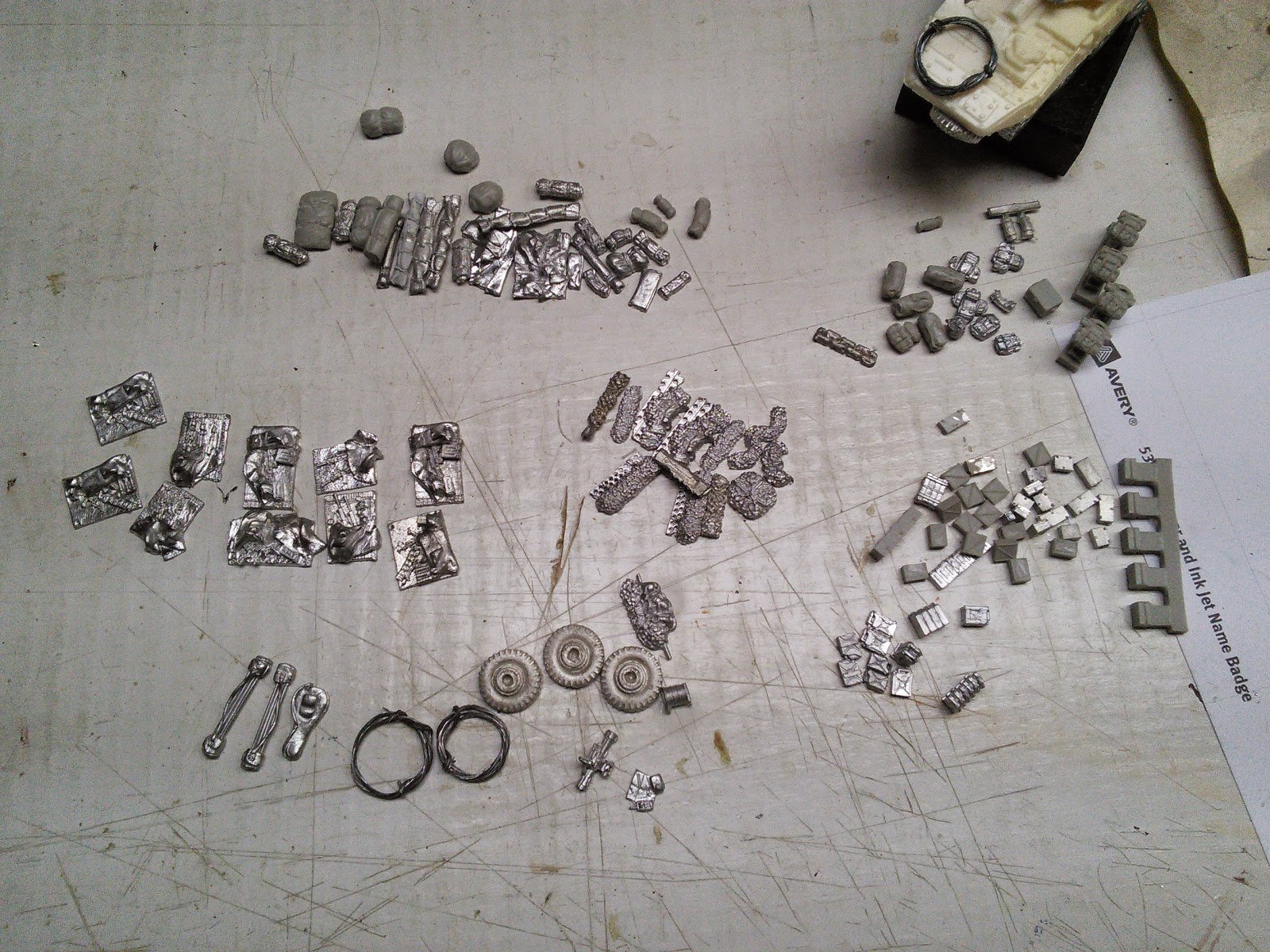 There's the S&S Large Stowage set (50 pcs), some RAFM bits and a set of resin stowage I picked up on eBay.

Among the S&S pieces are these: 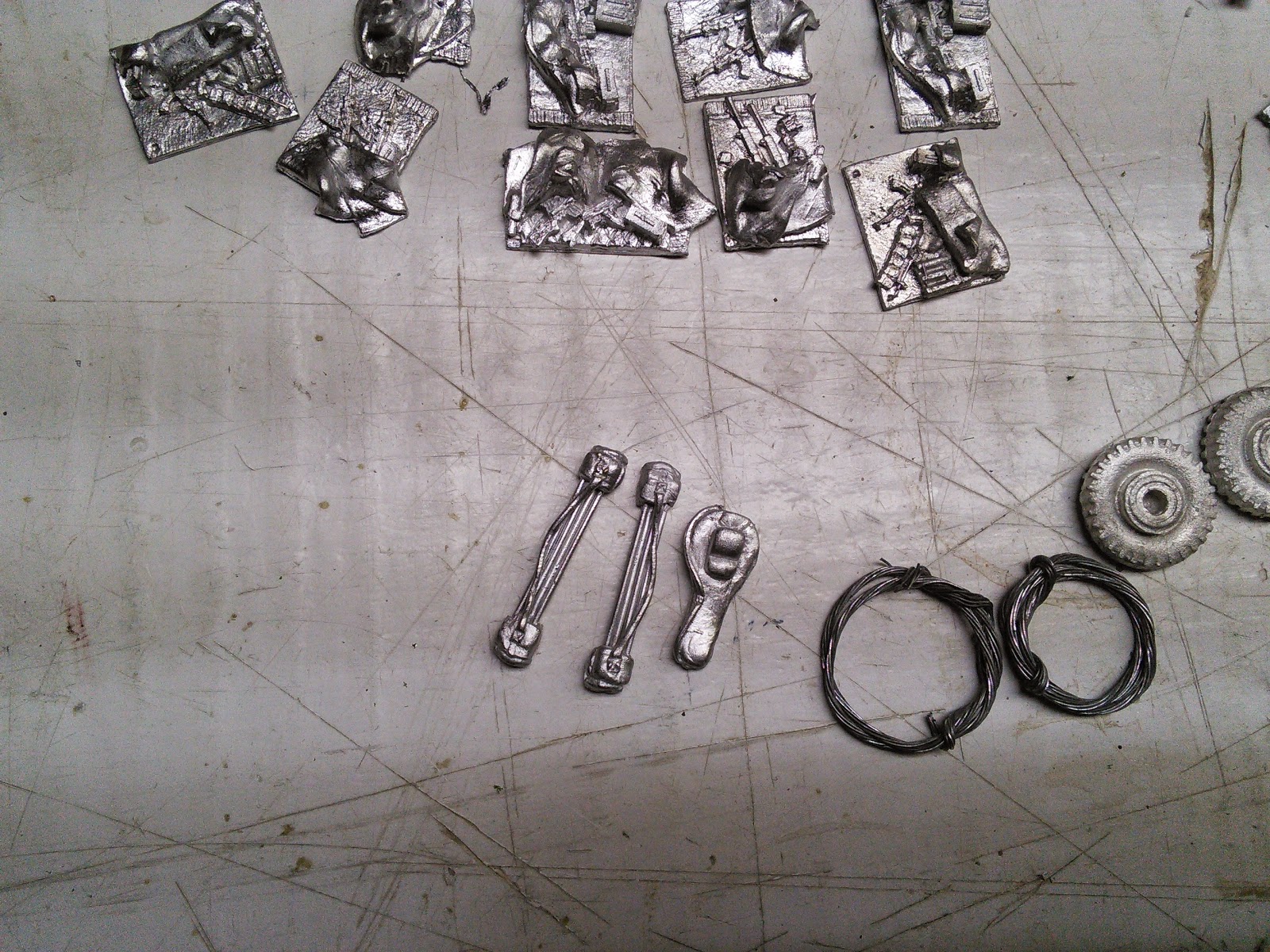 The long thingys and the blobby thing in the center beside my homemade coils of towing cable. Any ideas?

But otherwise, I've gotten two 5 ton trucks and a pickup truck technical assembled (good for police or Taliban depending on how I paint it). Plus more stowage on the Leopard, the Bisons and starting on the LAVs. 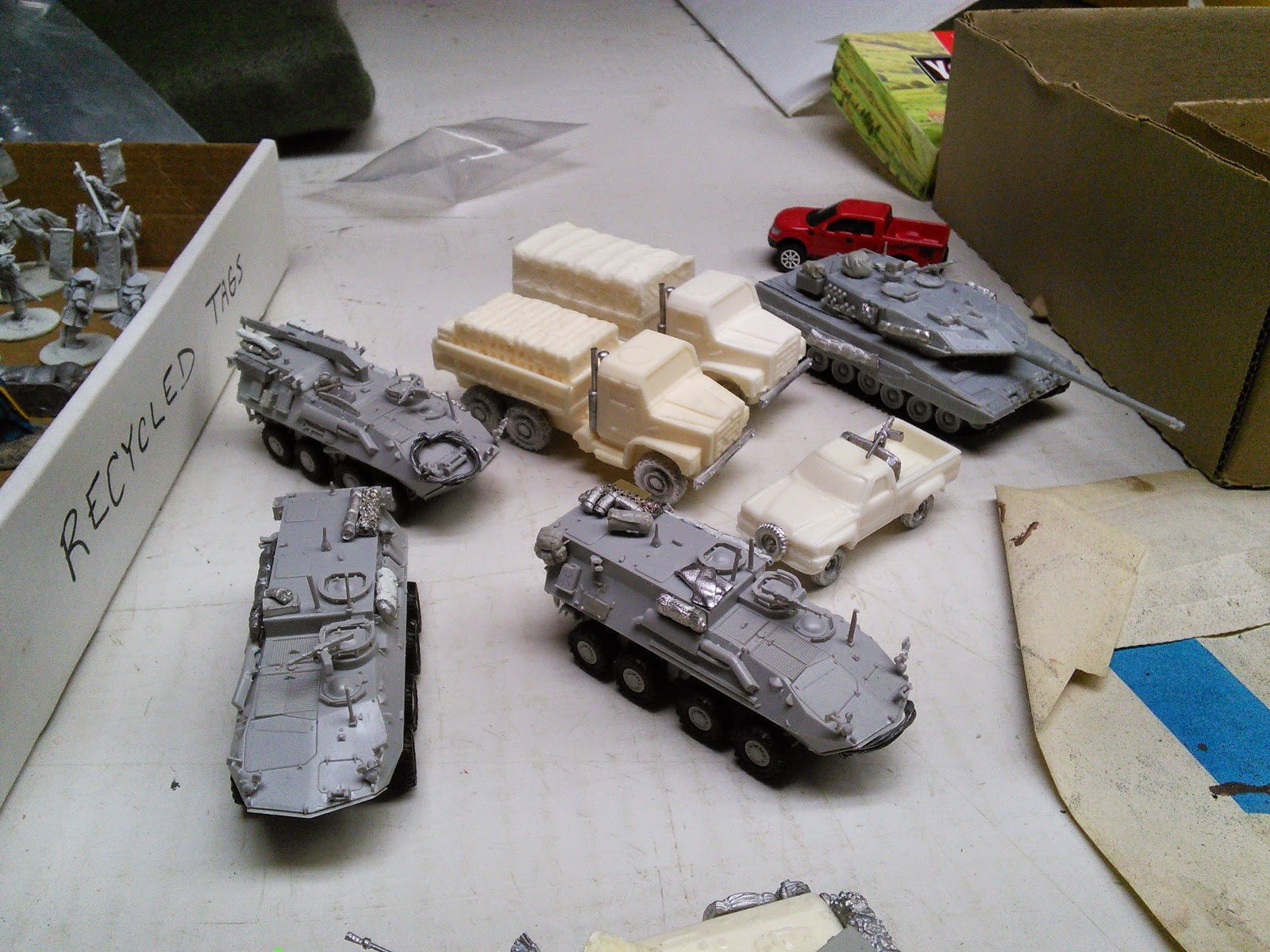 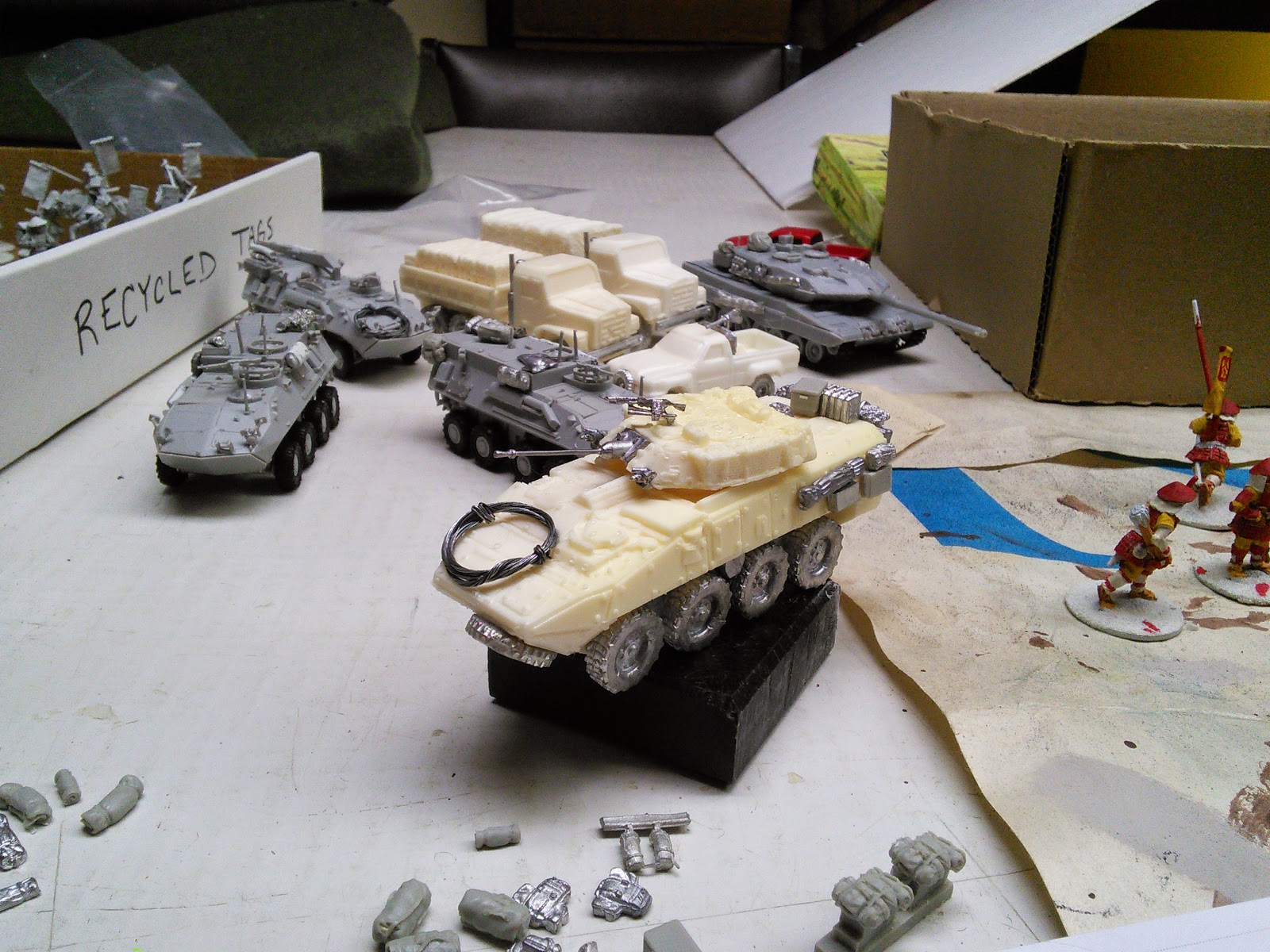 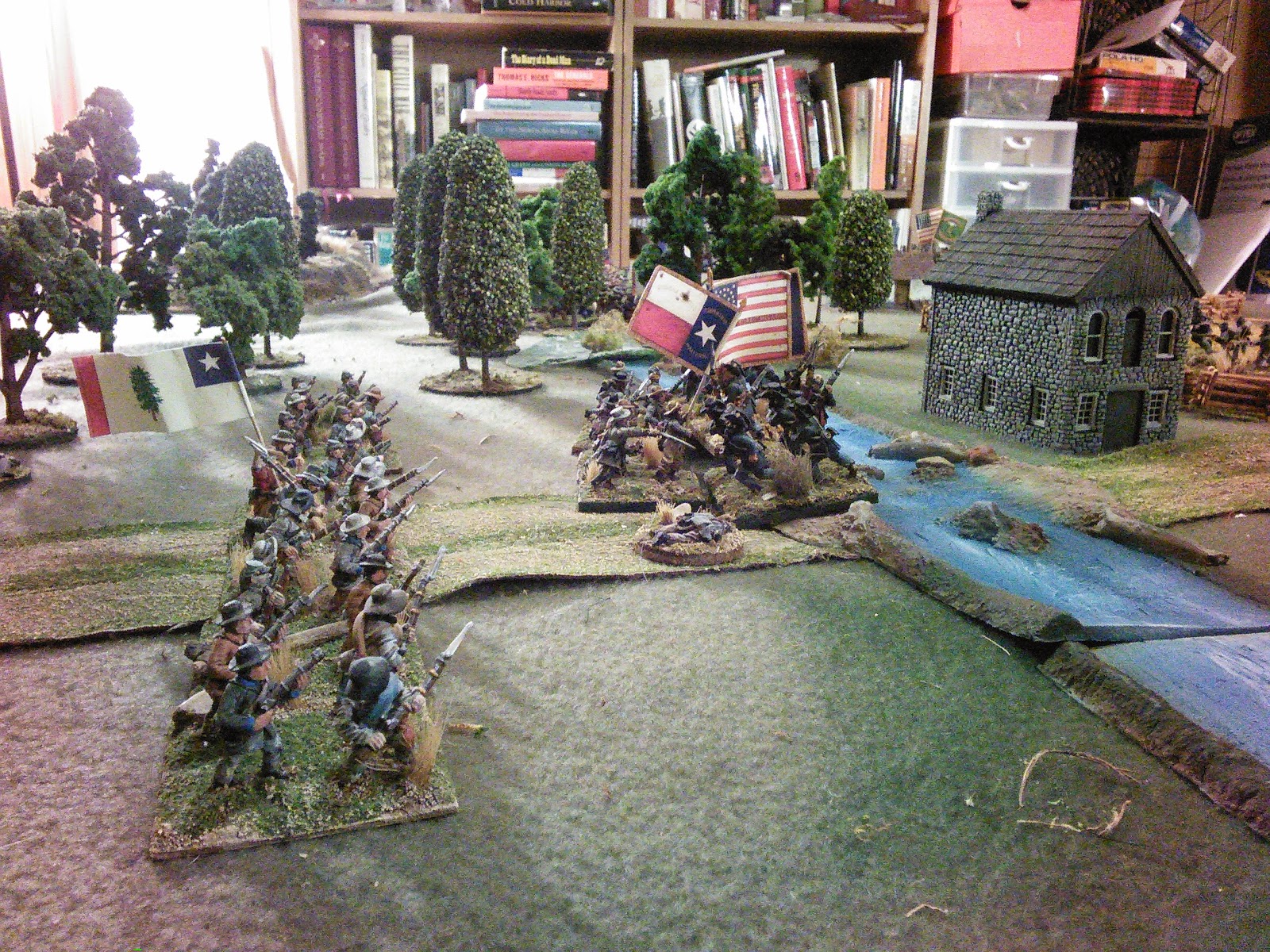 All in all, I quite enjoyed the game and could see it easily scaling up to bigger battles using the other Mike's 15mm Fire & Fury armies.
Posted by James at 10:40 AM 6 comments: