So this is my first day off (although I had to go in early this AM to do the order for tomorrow's delivery) since Christmas and it's time to catch up a bit.

Christmas was amazingly good. We're still restrained on the pressies, but we had the in-laws down for Christmas dinner, so my Snugglebunny made a proper Christmas feast with her tarragon stuffing. There was also cheesecake and apple pie for dessert, so rather than try and decide I had a bit of each! I can go without presents, but last year's rather bleak and penniless Christmas without my wife's usual holiday feast was very depressing.

There were a few things in my stocking this year. 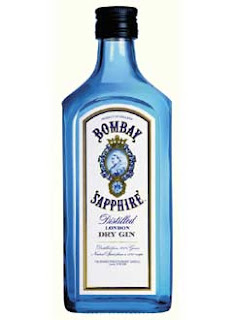 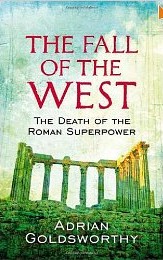 I'm enjoying both quite a bit!
Posted by James at 7:41 AM No comments:

Herbie gets a B-echelon finally!

In my previous posting in which I showed off my 15mm WW2 Canadian army I mentioned some bits that I was missing. Well thanks to one friend scouring the Fall-In Flea Market and another willing to trade some pieces for more painting I've been able to round things out more.

So while painting up the Mad Padre's anti-tank guns I also worked on my own Canadian kit. I mix my own Canadian battledress uniform colour and highlight colour for my armour. It's easier to mix larger batches of paint all at once, so it was more efficient to do both lots of models together.


First up is a brace of Shermans. The Firefly came to me assembled and primed and was gifted by the fellow for whom I painted the Italian paratroopers. It has a resin hull so I'm guessing it's Battlefront. I just added the antenna. 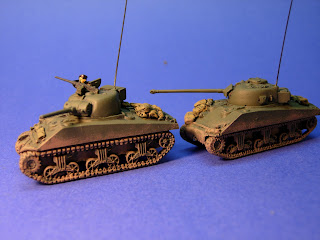 The Sherman V is a Battlefront model and sits a bit taller than my Old Glory models. I added some extra stowage since Canadian armour tended to have a 'gypsy caravan' look with baggage strapped all over the deck. The hatch covers went on a lot easier with this one than my other two troop commander tanks. I'm thinking this one will be my squadron commander, so I included the .50 cal. AAMG. Or with the Firefly he can make a third understrength troop.  Of course now I find myself wanting to build a full 5 troop squadron! 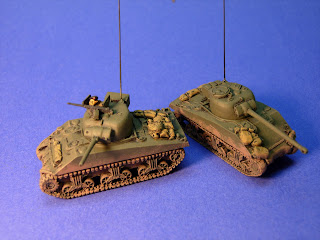 Next is a pair of Humber armoured cars from the Divisonal Recce regiment to reinforce my Dingos. The one on the left is a Quality Cast model and was in pretty rough shape. I had to trim some flash, replace a wheel and repaint it. The one on the right is a Battlefront model and came the way it looks here. The original owner did a nice job on the camo and Allied recognition star so I won't touch those. 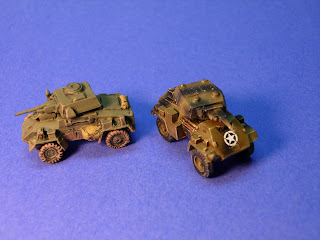 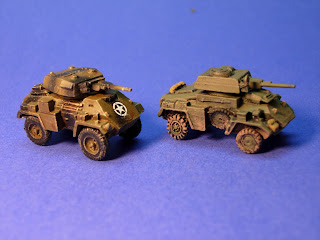 I also added four more Battlefront Bren carriers which just needed a bit of a drybrush so the paint would match my existing armour. This brings me up to 10 carriers which is enough to field the Carrier platoon or have some transport for weapons teams or 6 pounders. I could also field a very small mechanized infantry force to represent one of the combined arms mobile columns 5th Canadian Armoured Division would send out when the front became 'fluid'.

For company sized WW2 battles it doesn't make sense to have too much baggage and rear-echelon stuff on table since they'd try to stay far out of the line of fire. Even lorried infantry and weapons teams would debus in the rear and march forward to the firing line. But it's nice to have some transport and a trio of Battlefront 15cwt CMP trucks fit the bill. 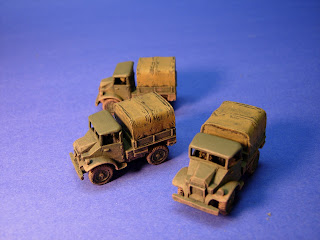 I just love the angles on the CMP (Canadian Military Pattern) cabs. 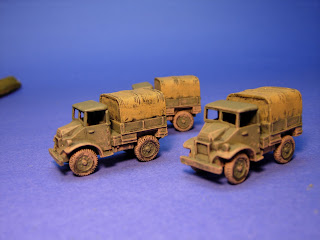 And at long last I have a Typhoon! He's carrying bombs instead of rockets but I'll live. He's a heavy die cast model and I need to get him a heavier, more stable base or there will be some unfortunate crashes! He fell over during the photo shoot and wobbled for quite a while before I could take the picture. 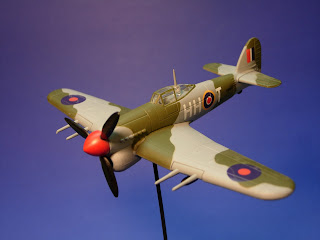 Finally we have this nice little pontoon bridge that came to me as 'free to a good home.' So I've given it a good home and a coat of paint. It's soft plastic and I suspect came with a toy playset originally. But a coat of gesso helped the paint stick. As you can see it just happens to fit my resin river quite nicely. 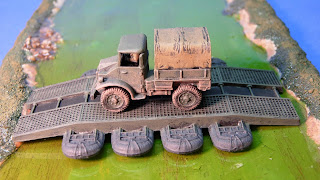 While I was reading On to Victory and Terrible Victory by Mark Zuelke I noticed that Wasps kept showing up to support every company sized attack. It seems that by June or July 1944 some Wasp flame thrower carriers were organic to every infantry battalion. I'm still trying to figure out how many and where they were attached. I'm guessing they were added to the Pioneer platoon. But it seems that for battles in Holland and Germany my squaddies need a trio of Wasps to support them. Really big attacks would have Crocodiles (a flame-throwing Churchill tank) and Wasps but I'll settle for getting some Wasps.

I've finally finished a commission for my friend, the Mad Padre. It's only taken me since March, but fortunately he's a patient man.

He sent me a section of Battlefront 17 pounder anti-tank guns, 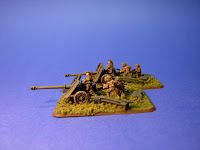 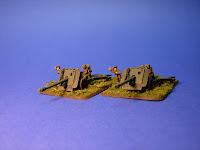 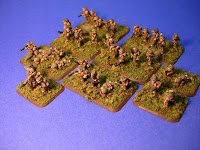 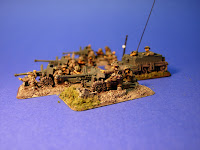 I have no idea who Sgt. Stanley is. I tried Googling his name and only got the colour text on the Battlefront website. But the guns come with broken bits of wall so rather than my usual flock I had to use sand to give the bases an urban rubble feel. The command group around the light post has an odd Narnia feel to it, I think.
The models are nice, if a bit crowded on the Flames of War bases. For my own 6 pounders I used the large bases and like it better. I had to really squish the crew in on these ones. Especially the gun with Sgt. Stanley directing the aim with his foot up on the wheel. To fit the gunner in between him and the breech I had to trim some bases down.


I liked the infantry platoon. They're wearing the Mk III 'turtle shell' helmet issued to the assault divisions for D-Day. The sculpts got a lot of flak on the internet for having big heads and weapons. 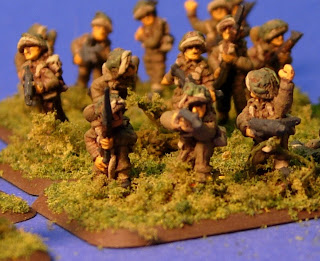 I didn't think the heads looked all that large. Especially when compared with this picture of real troops in Normandy. 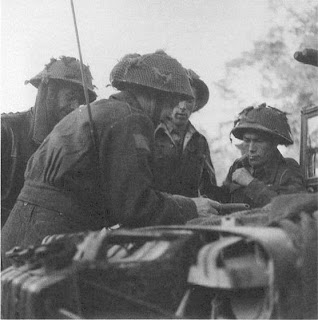 The SMLE rifles seemed OK, a bit robust to withstand casting and gaming but not too bad. The sten guns are a bit extreme though as you can see from the close up, but easily ignored.

The 17 pounders were a bit of trouble to assemble and required patience. But they're nice big-ass guns attached from the Divisional Anti-tank Regiment, and I wish I had a pair now too.

Now I just need to get them packed and mailed off and hopefully the Mad Padre will post a nice battle report featuring these fellows sometime soon.
Posted by James at 7:54 PM 2 comments:

Merry Christmas, Now Get Out!

As I said in the previous post, Christmas is very hard on Retail Workers. Many Retail Workers actually really hate Christmas.
The lines are longer. The customers are more rushed. The customers are often quite grouchy. They may be getting more hours but that is a mixed blessing since at this time of year they too have other things demanding their time that they would like to be at and often have to miss or cut short because they are in the store serving you.
Add to that they have been bombarded by happy, jolly, cliched, trashy Christmas Muzak since the middle of November.
We were going to be at closed on Boxing Day (the Boss realizes that everyone will be eating leftovers and spending their money at the Boxing Day sales, not buying groceries). Then last week a memo came down from some Head Office fellow (who probably gets to knock off early on Christmas Eve and stay snug at home with his family on Boxing Day) All Buy Food stores will be open on Boxing Day.
Wow. Thanks.
So we're going to open the store to sell some batteries, stuffing mix, egg nog and maybe a few packets of gravy. Gee, that's going to help the GPM bunches.
At least it will be time and half and there won't be any trucks to unload.
Posted by James at 5:56 AM 3 comments:

Cashiers keep asking if I am "Ready for Christmas?" yet.
I know, they're just making polite chit-chat and Christmas is particularly hard on retail workers.
Of course I am not at all ready. We only just started playing Christmas music (Tony Bennet) at home last night, although it's been playing for about two weeks over the Buy Food's Muzak system. At least this year I am employed so my Snugglebunny is actually talking a tree and feast and the budget will even run to a few presents.
Some of my co-workers have been decorating since mid-November, made long bus trips to the US big box stores in search of deals and even braved Black Friday mobs.
I'm selling more baking supplies, so I imagine all across town there is a flurry of holiday baking as women reacquaint themselves with their ovens, dig out long unused baking trays and mixing bowls and search for clipped out from old magazines and filed away recipes for cookies, squares and tarts.
But what does it really mean to be ready for Christmas?
Decorations up? Presents bought and wrapped? Food prepared? House cleaned?
Can one ever be truly ready for an intrusion of in-laws or the Incarnation of God?
Posted by James at 5:41 AM No comments: