And my day just got better...

Massively craptacular day at work today. Inventory, refrigeration failures, boss trying to kill us all with a chlorine gas cloud, 1000 kg skids and no power jack....

When I got home to find daughter no. 2 and her boyfriend in the kitchen and this on the counter:

Apple pie made from the bumper crop of Northern Spy apples from our own tree.

I'm sure some of you noticed in my last game report the big rectangles of orange paper, with finest Sharpie graphics, that I was using for blinds.

I certainly noticed, and resolved to improve upon them.

So the other day I spent a few minutes at the computer. The graphics were simple and anyone with Microsoft Word can do them.

I just made a text box with a 4 point border and rounded corners that covered half a page, and then repeated the process. This reminded me of the tactical signs used on maps and TO&Es so I was happy. If I could figure out a way to break the top of the box and insert the three dots for a platoon, I'd be even happier. But that I suspect would involve using Paint or some such.

Into the text boxes I first added some line returns. This is important since it lets you move stuff about. I then inserted some graphics; either a basic German balken kreuze or a negative image of an Allied air recognition star that I found easily using Google Image Search: 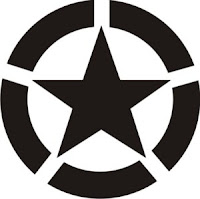 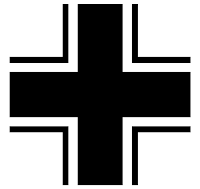 Then text "Allied Blind 1" or "German Blind 1" was added over top using a font and size I liked and I made sure everything was centered. I just changed the number each time I printed and printed them off on laser transparency sheets until I had 10 blinds for each side.

A few minutes with scissors to cut them out et voila!


I hope the transparency sheeting makes them a little less intrusive than other options. They are supposed to represent hidden units after all!

I'd thought about doing different divisional badges or Canadian regimental cap badges for each blind, but I realized that would drive me mad since I'd have to readjust the centering with EACH sheet.

Plus, I might do Brits or even possibly Americans some day, so the Allied star works for all concerned. I suppose if I ever do Soviets then they'd object and I'll have to do some blinds featuring big Red Stars. But that's easily sorted.
Posted by James at 6:08 PM 10 comments:

I finally sussed out how to turn some scrap fun fur into grain fields.

Mrs Rabbitman used to make dolls and puppets and I kept some scraps of the fur, thinking to make thatched cottages and such out of them.

Well, my Medieval village is now looking pretty good thanks to the 4Ground and Perry cottages, saving me the trouble of making more cottages. So I thought I could turn them into fields of standing grain useful for everything from foraging Romans to roaming Panzers on the steppes.

The trouble is the colours of said fun fur were not very grainy. One piece was white. The other pieces were striped grey and off-white. Although this made for some very nice Big Bad Wolves, fields of standing grain it does not.

How to colour it? At first I thought tea, but the fibers are synthetic and I didn't think the tea would hold. Then I remembered my pail of chocolate brown latex paint I used for all my Northwest Frontier mountains and rocks. I thinned some of that down in a big bucket and soaked the pieces. The solution was I fear too watery and it ran off, so I ended up pouring paint right on and smudging it around with my rubber gloved hands.

Here are the results hanging to dry in the yard.
The piece on the far right of the picture started out white and got the heaviest rubbing in of brown paint. The piece on the left got the lightest treatment. You'll notice the drizzling of brown paint turning the lawn brown.... fortunately Mrs. Rabbitman doesn't care about having a perfect golf green lawn either!

The Mad Padre inspected my Work In Progress rather dubiously last night. But today I took them back outside and gave them a good misting of Krylon satin finish Almond spray paint. 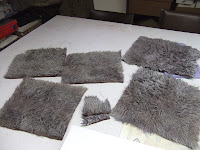 The piece in the upper right corner is the formerly white chunk of fur. It is heavily matted. So it will either represent grain heavily trampled by cavalry charges or rampaging tanks, or it will just be rough scrub in the Backest of Beyonds.

I couldn't resist setting up a quick vignette to see how photogenic my new grain fields are:

Well, not bad. Didn't cost me anything. I need to spend a bit more time with a brush getting everything standing up again.
Posted by James at 2:12 PM 7 comments:

Small Pack of the Vanities

Whenever I come back from FTXs (Field Training Exercises) the voluminous pockets of my combats are stuffed with crap. Left over rations (I collect the Soldier Fuel bars - a chewy high calorie snack bar which most adults find kinda gross- as rewards for the cadets), Ops plan, schedules, FMP (Field Message Pad), bush hat (swap it with my beret when coming out of the field), an extra spoon (never know you might drop the one you're using in the dirt), pens, sunglasses, wet wipes (always useful)....
And then there's the bulkier items that one should also have about one's person; sun screen, water bottles, rain gear.
If I went to supply and requested a pack (to which I am entitled as part of my scale of issue) I'd get one of these (as demonstrated by a colleague):


A full frame rucksack for humping your worries through the boonies on serious treks. A bit big, and it would in all likelihood have seen much better days back in the 80s. Assuming it had all its straps and buckles.
So I decided I needed a day pack or small pack.
My vanity wouldn't let me get one that was civilian pattern. Something about hiking along with a bright red or blue pack just looks wrong to me, even though we aren't tactical and most of the cadets are wearing civvies in the field anyway.
The really nice Gucci gear ("Gucci gear" a phrase to describe private purchase equipment to supplement or replace the less comfortable or less useful issue gear) packs from Soldier Gear or CP Gear were out of my price range.
After I got paid for my latest painting commission I went to my local surplus store and found a day pack that fit my price range in digital camo (looks kinda like, but isn't really, Cadpat) with a big enough central pouch for rain gear, training aids and lesson plans and side pockets for water bottles, sunscreen, bug repellent and anything else I might find useful. The straps aren't padded and the buckles aren't quick release, but I don't plan on doing any serious trekking with it.

To add to my field swag, one of the drivers who delivers to my store from our warehouse used to be in the Reserves and finds my CIC work interesting. The other day he brought with him a couple of "Junior General Kits" (olive drab zippered canvas portfolios to go over a binder or spiral notebook with pockets for pens, markers, other bits of crap) and a newer, slightly nicer FMP.
He figures I'll be using them more than he ever will.