I didn't think my shiny new Canadian troops would need heavy armour.
I didn't actually think I would find any for them.
Then I started prowling eBay looking for a Bison APC or suitable aircraft....

Oh my, look at all the tiny pieces! 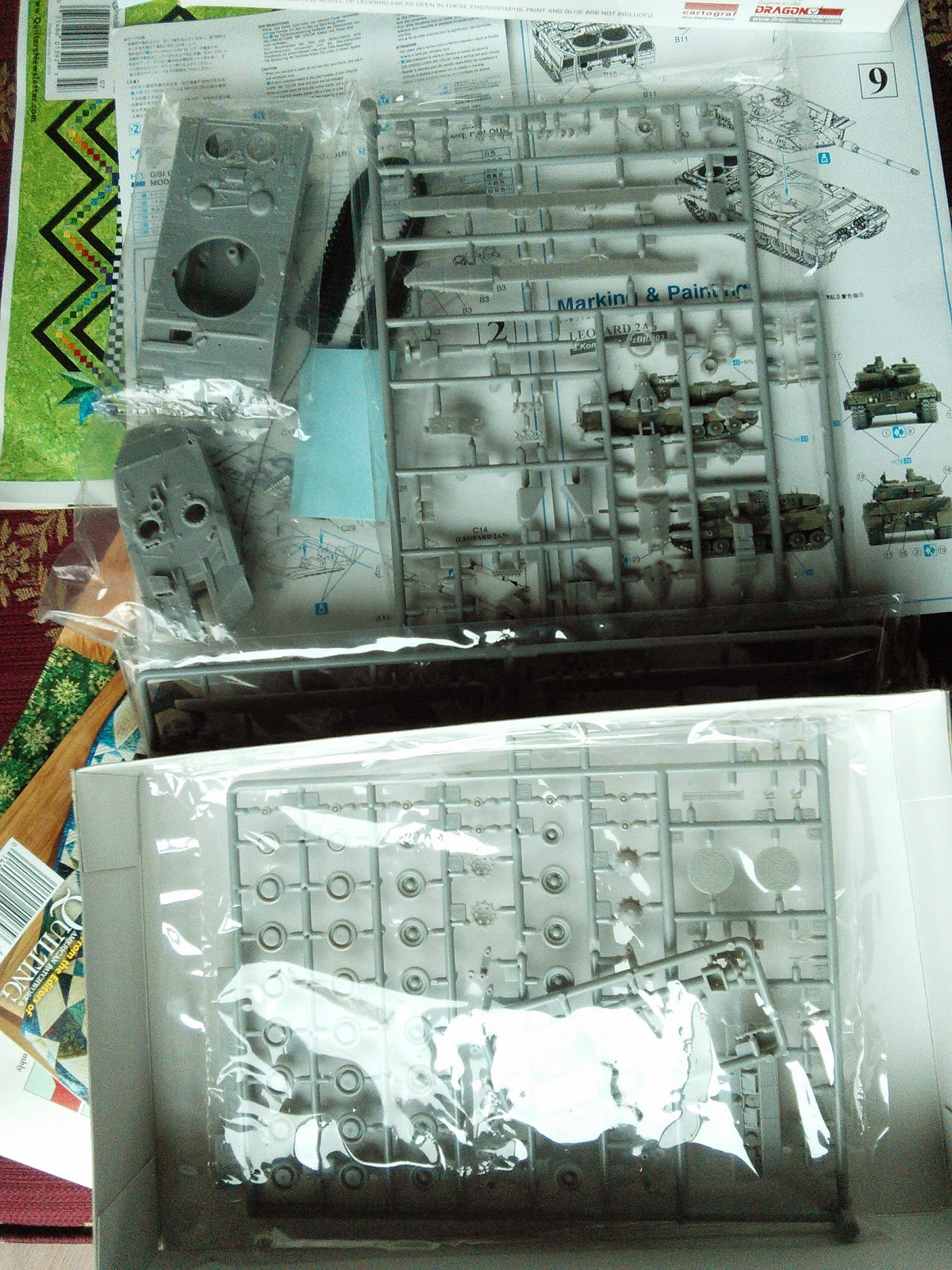 Of course back when we launched into WW2 I had advocated 15mm, because I said "I didn't want to assemble model kits."

But in my defense,  no one makes a Leopard 2A6 in resin or metal in any scale. Necessity being a mother, and all that.
Posted by James at 8:19 AM 1 comment:

It's a beautiful autumn Thanksgiving holiday weekend here at Rabbit HQ. So in between some fall errands and chores I'm getting a few hobby projects moved along.

I've been slowly assembling a Canadian tank squadron (a full 20 tanks) for my friend Don for over a year now. I put a push on to finish the HQ troop this week so I can get them primed before it freezes outside. The Churchills have been marking time, waiting on the Shermans for a while now. I figured if I get any allied armour painted up I should work on them all. Once primed I can work on them over the winter and hand off Don's squadron to him at Hotlead.

The hulls are all taped down to the boards I use to hold figures while I spray prime them. I'm taking a lesson learned from painting my own PSC Shermans. The turret rings are masked with round stickers and I have tacked the turrets on to nails with some superglue. So hopefully the turrets will be able to rotate once I've done painting them! 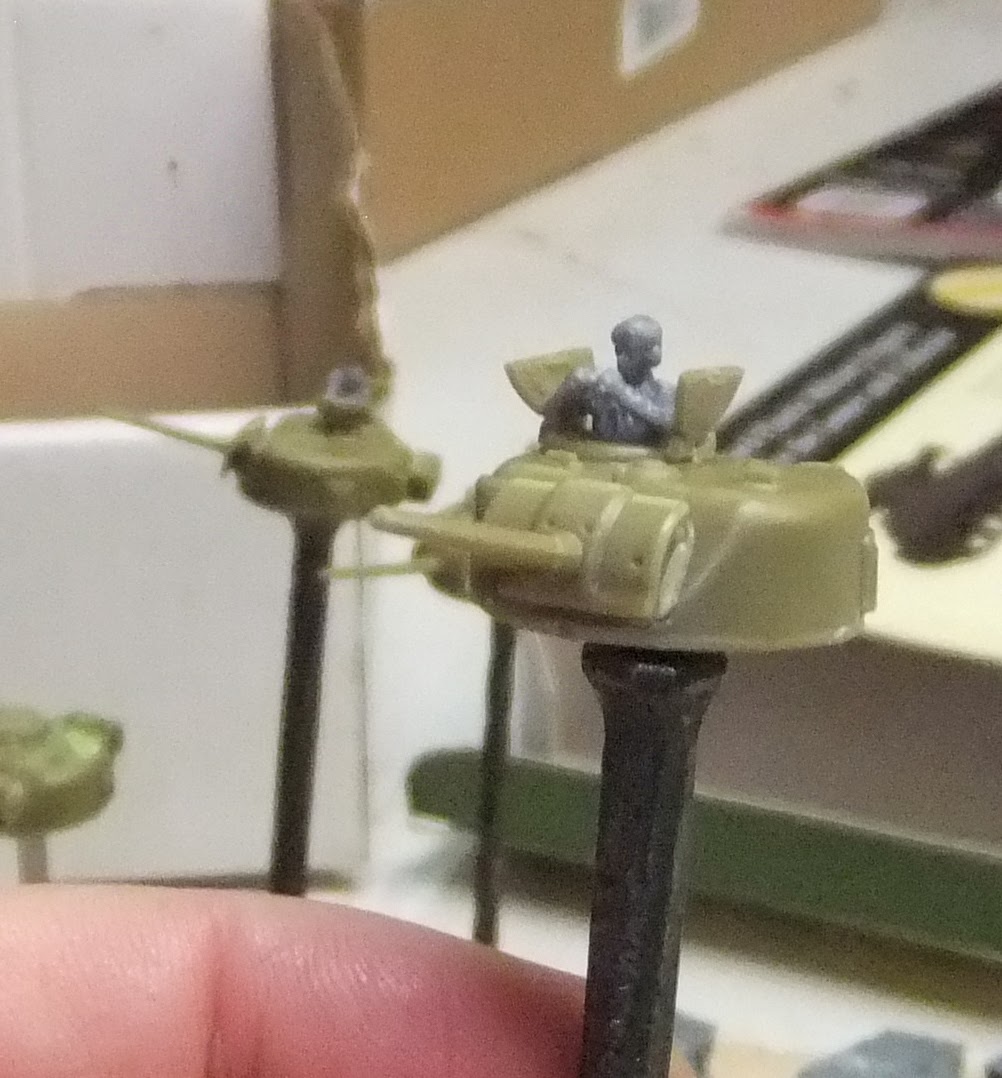 I also used a couple of crew commanders from the Churchill box to be his Squadron commander and 2i/c. I like how you can shift the arms to give a bit of variety in the pose.

Still slowly poking along at the Mahdists, and as you can see the Norman church hasn't found a home or paint yet.

Part of the reason I want to clear some things off is this arrived this week:


I ordered three fire teams of Elheim's Modern Canadians and enough Taliban to keep them (and me busy) until he expands the range with enough to build a complete platoon. I also got a news crew, a pack of ANP and some civilians.

With a bit of trial and adventure I made it to another small convention yesterday as Council Fires made another attempt at rebirth. This convention used to be a staple in the autumn for many years, then it's organizer stopped doing it. A decent attempt to resurrect it was made two years ago and then there was a year off. This year's effort was pretty modest, another Legion hall and minimal pre-show promotion or advertising.

Unfortunately I had to work the night before, getting home at 0500 to shower and get some sleep before Martin was banging on the door at 0700 to load the van with stock. Then it was back to bed, planning to get up around 1100 and see how I felt about driving to the show, but Wierdy-Beardy called at 0930. Quick breakfast and he picked me up at 1000 to make the 45 minute-hourish drive to Cambridge.

"Do you know where we're going?" I ask in all innocence.
"I have a vague idea" he says.

Now Cambridge is composed of three smaller villages (Hespler, Galt and Preston) that all grew together, so there are in fact THREE Legion halls. Plus my driver was remembering the venue from two years ago, which was in fact the Newfoundland Club.

Turns out we drove within a couple of blocks of the venue when we first arrived in town, but had to circumnavigate all of Cambridge for an hour visiting the other two Legion halls first.

But we did eventually arrive around 1300 hours to find about half a dozen very nice miniatures games in full swing. Some X-Wing, a 28mm WW2 using Chain of Command, a big 28mm Napoleonic battle (Shako II), a couple of 20mm Vietnam games of the Battle of Ia Drang Valley (LZ X-Ray and the Lost Platoon) put on by RAFM using their Charlie Company rules and some 10 or maybe 15mm SF armour. A VSF game using In Her Majesties Name was being set up. I started taking pictures and my battery died. There are more pictures of the IHMN game over on the Lead Adventure Forum here. Unfortunately the penguin in the pith helmet (sounds like a Professor Elemental song doesn't it?) eluded photography. 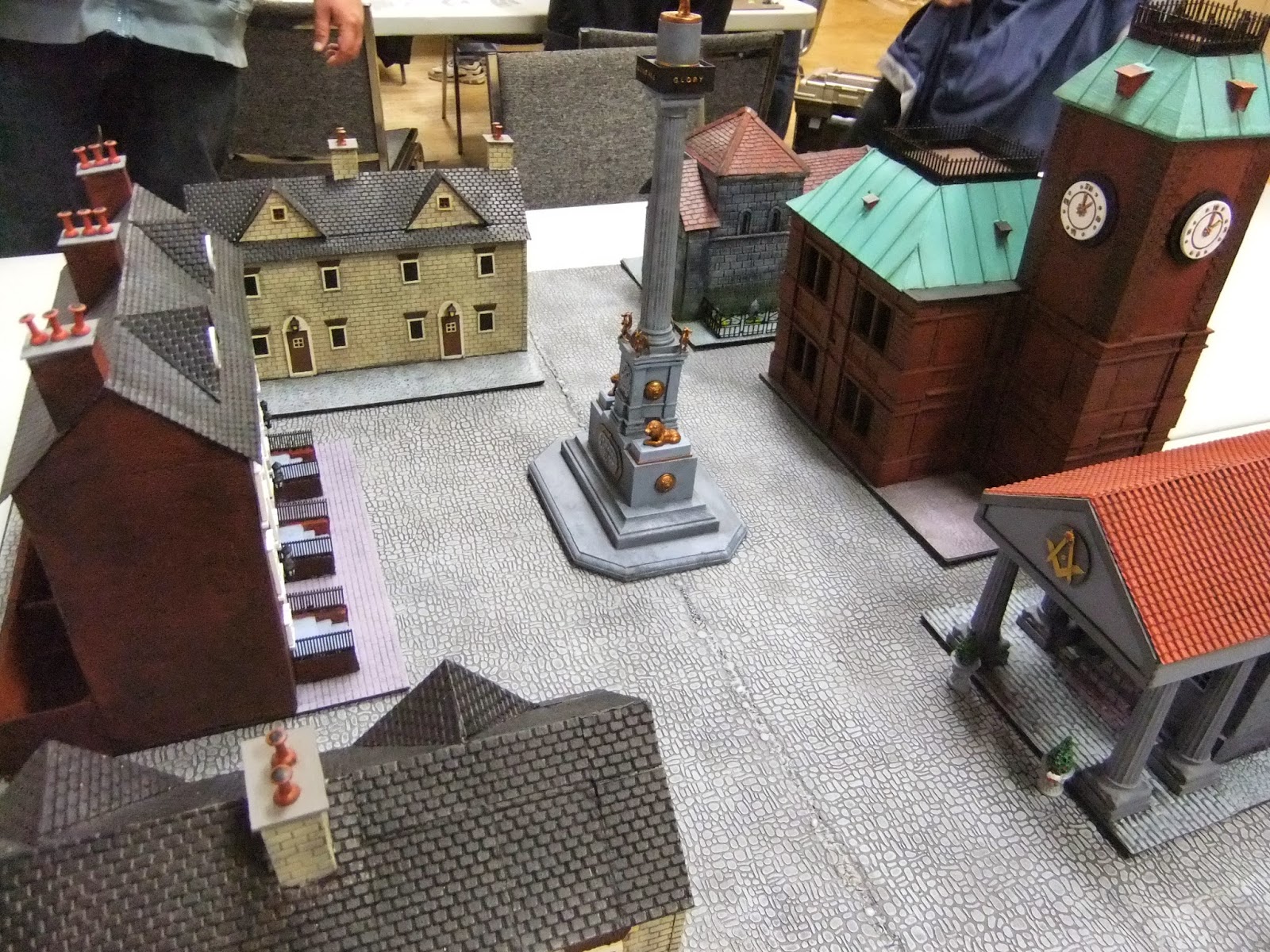 While Wierdy-Beardy played in a second 28mm Napoleonic game, I spent all my afternoon talking with folks and got this sweet deal from the Crossed Swords multi-convention long going out of business sale. A nice, if somewhat shopworn, 28mm resin Norman church for only $10.00!

I'm confident the previous attempt to paint it will be easy to cover up.

Being more centrally located Council Fires drew a slightly bigger crowd than KEGSCON. Martin was pleased with the sales.
Posted by James at 11:45 AM 2 comments:

Well 2014 has not been a good year for the Warren.

Gordie, one of our males, hopped off to the Big Warren in the Sky the other night after being sick for a while. Gordie was probably the most socialized bunny; he didn't really like being picked up and petted, but he put up with it. Like all the bunnies he preferred getting his human attention/ear scratchies while safely on the ground. He'd been having problems for a while, so I guess it's for the best. Of course most of the pictures are from when they were small, before we separated them into separate cages and moved them all downstairs.

Here is a home movie my daughter made while learning some digital video stuff.

So now it's just Biggles, the last of the litter. He's always been the most aloof, but he's mellowed with age and I think he may start feeling a bit lonely without his annoying brother about. We had to keep them separate or they'd fight. Even after neutering and age, they still kept their distance.

The Warren is certainly more open after I removed the extra cages.

There used to be four cages, stacked two high in the corners. When they were younger having the cages as pictured above would have been an invitation to jump up and over and escape. Plus the boys tried to attack each other through the bars, so having them up off the ground was necessary. Biggles however prefers to keep lower to the ground and under cover. Jumping up on top of things just makes you a target for predators after all.