After playing in Steve Thompson's Sharp Practice game at Hotlead (these are pictures of actual game I played in too), I started thinking about my fledgling Napoleonics collection. I have one box of Warlord Prussian Landwehr (which I reviewed last year) and 60 odd Russians I got two Hotlead's ago in the Bring & Buy.

I had been thinking that wasn't really enough to do anything with and I'd need more. Not being able to afford a lot more I put them away.

But at Hotlead I had had a pretty good time with a pretty smallish army (2x 24 figure units, 2x guns and an 8 figure cavalry unit). So I started thinking about my Napoleonics and realized that the box of Warlord figures would make a fine unit and the Russians would easily organize into at least 2 units.

I have enough Russian gunners to man two guns. I can probably get a second gun from Mike.

Hurray! Instant army! By the time I get all the infantry painted I will probably be able to save some money to buy a few cavalry and expand the Prussian contingent. Mike already has enough French to fight them if he can find enough extra command figures to make the Big Men.


Some more pictures emailed to me by an attendee showing a few other games. 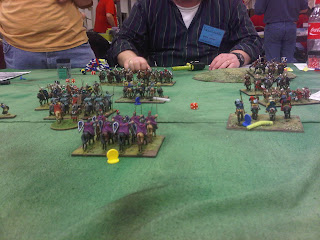 My friend Peter took a bunch of pictures when he wasn't manning the trenches at the Bring & Buy. He has kindly given permission to publish some of them here. I made all the pictures small to save on page loading. click on each to view at full size.