As someone who's idea of a good time is to drink tea and paint miniatures, it fills me with dread. I have very little idea what young people would think was fun. Many units go to Cadet Day at Canada's Wonderland. Ugh. I dislike rides at the fair so the thought of a day of them with asphalt, sun and expensive, greasy food just gives me a headache.

Last year the previous command team took them to Toronto for a long weekend. I've seen the pictures, fun was had. So this year would traditionally be the  relatively low cost Wonderland day trip. But I wanted to do something cool. My very keen OCdt had the clever idea to go up to CFB Borden and visit 400 Tactical Helicopter Squadron and 16 Wing, the Canadian Forces School of Aerospace Technology and Engineering (CFSATE).

There was even a slim chance of getting up in a CH-146 Griffon too, so I said "hell yeah, let's do that!"

400 THS is a Heavy Maintenance Squadron doing all of the 300 and 600 hour inspections, overhauls, rebuilds and maintenance on the RCAFs fleet of Griffon helicopters. So we toured the shops and the big hanger with about 7 helicopters in various states of dismemberment. 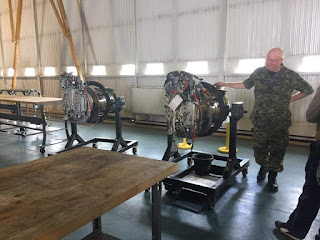 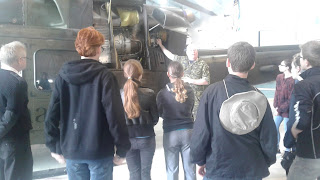 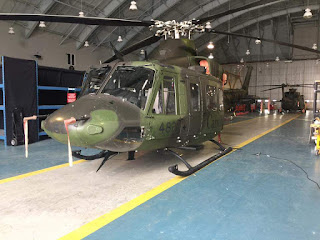 This helicopter was finished so the cadets weren't allowed to touch the controls, but the MCpl is pointing things out to them. 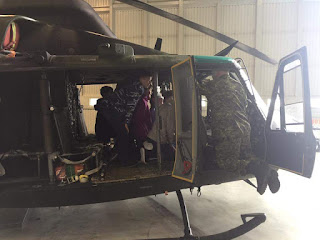 We also learned that, yes, there are in fact $1000.00 bolts. The actual precision piece of high quality steel costs $50.00. The other $950.00 is all the inspections (x-ray etc.) to make sure their aren't any micro-fractures or other invisible flaws that would cause a helicopter to fall out of the sky. Because when you've only got one nut holding things together, it has to be perfect. 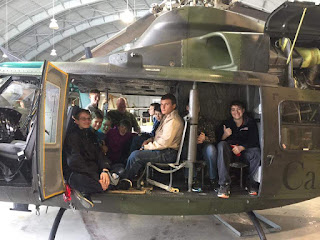 After lunch we toured 16 Wing, the Canadian Forces School of Aerospace Technology and Engineering. After the 4 Technicians (AVC-air frame construction, AVN-avionics, AVS-aviation systems, AWS-air weapons) and the AERE (Aerospace Engineer) Officer each explained their trades, we toured the hanger full of cool training aides that the students practice on. 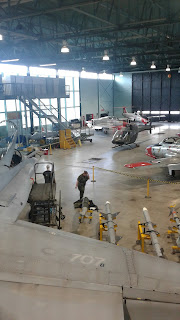 Of course everyone got a chance to sit in the cockpit of the decommissioned F-18 fighter. It was hard not to make airplane noises. 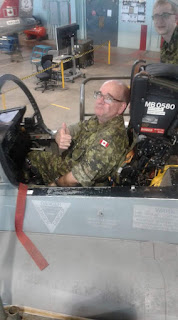 The AWS Tech, an enthusiastic young lady, got to show us her weapons systems and since she is also an EOD tech, we got to try on the bomb suit. Some of the cadets tried to do push ups in them (one young man broke their record of 45!). I didn't try. I felt like a Medieval knight being armed by his page, since these get ups require help to put on and take off.. 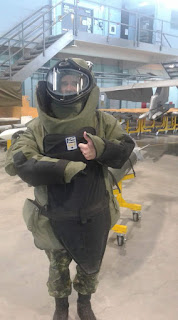 Everything else over the weekend was pretty flexible and to blow off some steam we took them to the Confidence Course. The young lady in the pink got stuck her first time over this obstacle but the next morning when we had some time to kill, she asked to go back and do it again, so we did. And she went over it several times again. Small moments like this keep me motivated. 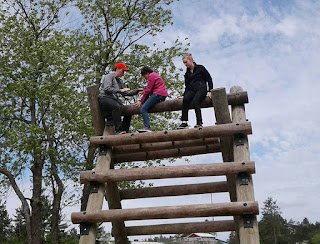 Another amusing story. CFB Borden, being the birthplace of the Royal Canadian Armoured Corps, has the Worthington Tank Museum. We had some time to kill so we go look at the tank park. 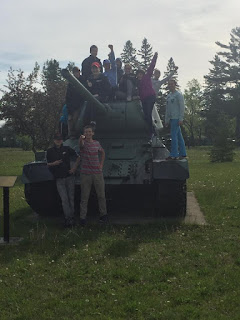 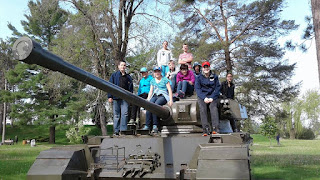 We stayed in the same quarters I used on my courses and ate in the same Mess, so the cadets were always learning new things from Friday night when the senior cadets demonstrated how to make their beds, getting breakfast and right up to cleaning their quarters (we had a kind of bitchy Leading Seaman as Duty NCM) before we went home. Between a taste of life in garrison and touring the CFSATE they got a good look at what life would be like if they joined the RCAF later.

So year end trip turned into a training weekend in disguise, and I was spared a day of headaches at an amusement park.
Posted by James at 7:18 AM 4 comments:

I've just finished the pack of 28mm modern Canadians from Full Battle Rattle that I picked up at Hotlead. I'm quite pleased. 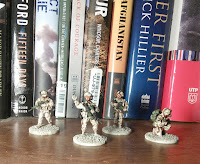 These are wonderfully detailed sculpts and nicely cast. I didn't have much flash to clean up. The weapons are really fine and I was worried about breaking a few muzzles off.

I painted them in much the same way that I did my 20mm figures except I tried to do some highlights on the weapons and ballistic eye wear. I also tried doing their patrol packs in temperate climate cadpat to give a bit of relief from all the arid pattern tan. 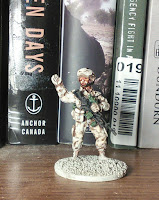 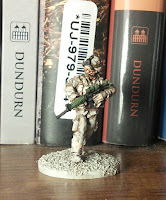 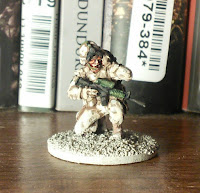 They were fun to paint up. I'm not going to switch scales though. I'm too far down the 20mm rabbit hole to go back. So these have been deployed to the modern section of my bookshelves. 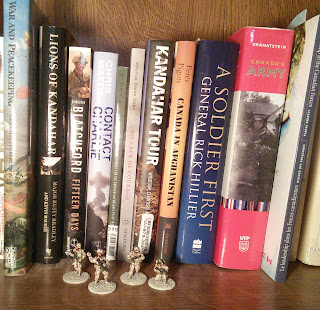 But if you're already a 28mm modern gamer and already have vehicles, insurgents etc. then these are really gorgeous figures and highly recommended. Next year I may ask Alex if I can buy just the radio operator and leader from his command pack though.
Posted by James at 1:07 PM 2 comments:

A while ago my friend Pete, who is always prowling for bargains, spotted a fellow selling some Vendel Elves on the Lead Adventure Forum Marketplace and sent me the link alerting me. He also suggested that to save postage, I have them mailed to his parents and he'd collect them when he went to visit. He visits every year and takes in Salute while he's at it.

After a few messages and a paypal transfer I was the happy owner of a goodly pile of Elves for about half what I'd have paid to buy them new. This lot comprises:
Each pack is 4 figures. So that's going to add another unit of Light Bows, and a unit of Light Foot with Missiles, plus 2 or 3 units of Elite armoured spearmen (depending on how many of the Nobles I want to use). Even though there'll be some figures going straight to the leadpile, there is one more bag of archers than I thought I was getting so I'm pretty happy really.

In other news my new Soviets got trashed in their first outing under the Chain of Command rules. A platoon of Rifles tried holding some swampy pine woods against the advancing Fascists. But an 80mm mortar barrage pinned my Maxim gun and half the force while a StuG rolled up to hammer the other half. 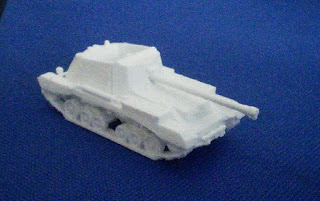 My friend had tried to order some 20mm samples from Butler Printed Models and got this 15mm Archer by mistake.

It's not bad on first look. I'll comment more when I paint it up.
Posted by James at 9:29 AM No comments:

My wife has been observing me trying to command my Air Cadet Squadron this past year, as myself and my two key staff members all work shifts. I see my Training Officer only about once a month. It makes it hard to have those running conversations that really help get things figured out.

But when I came home from a tour of Toronto International Airport the other week, she with Daughter Number Two's advice and assistance, had purchased for me a low-end Samsung cell phone as a birthday present.

This caused great shock and amazement among my young staff, who all think of me as a lovable dinosaur.

It's not that I don't like technology, I just can't see the point of rushing out to buy an expensive item if it won't make my life better in some way (it's money that can be better spent on miniatures or dinners out). So far the home phone and answering machine have been working fine. Our old cell phone (complete with antenna) was good for emergencies when out with the car. Looked at flip phones and having to push the number 3 nine times to get the letter 'i' seemed like a waste of life span.I need a proper key board to text. Anything important could wait until I got home. If someone needed to talk to me they could leave a message.

And now to facilitate being connected to my cadets I have enabled Facebook (for real time posting to the Squadron Page) and Remind (an app used by teachers to send out class announcements) on the cell phone as well. Thus the tentacles of the Big Machine get more of a grip on me.

But my young staff officers are really enjoying being able to get hold of me more quickly when I'm not at cadets.

I think the present was more for them than me.
Posted by James at 9:27 AM 3 comments: