I've been busy gluing MDF like a mad thing, resulting in an impressive street of buildings.

The Sarissa buildings all go together quickly. One quibble is the upper floors are open concept. But I used some heavy card stock to make simple partition walls. 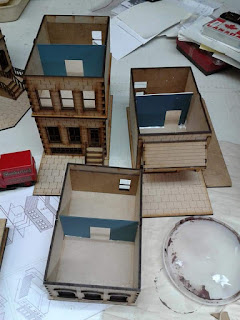 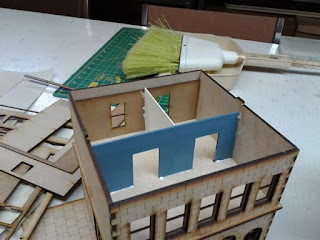 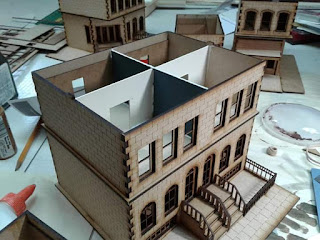 I also used some heavy art board to make some lengths of paving to create alleys between the buildings. Dirty deeds need dark alleys, and I have lots of trash cans that need a place to go.

After spray painting with a light tan, painting has gone quickly. Both buildings took maybe 3 hours each. 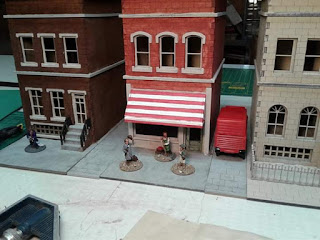 I've also had a plastic toy pony stable from Ertl that Pete found. I added a back door with my Dremel Tool and some card and stuck it on a base.  Looking at most commercial properties you see a lot of clutter and junk (especially prior to 5S and Kaizen ), so I added piles of construction materials around it to give some cover and character. After painting I added some tufts and weeds. Taller weeds fill spaces that I couldn't reach with sand. 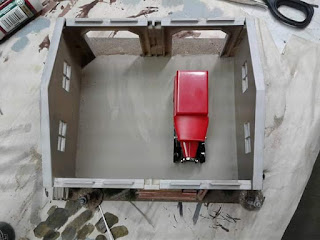 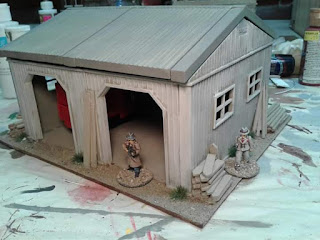 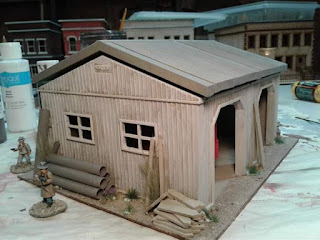 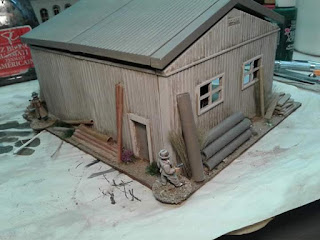 Plastic coffee stirrers become copper pipes. Plastic tubes become concrete pipes. Wooden fence posts from cheap Christmas village fences become stacks of fence pickets. Bamboo skewers get turned into a stack of lumber. I've had stacks of construction materials made as scatter terrain for years. Those will be out front or beside the building. 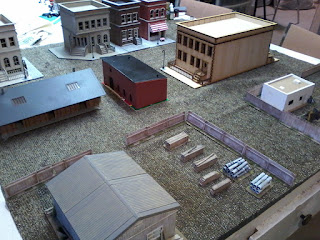 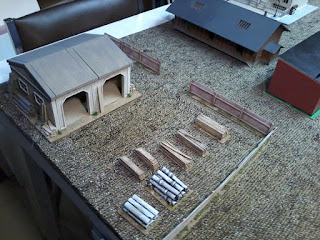 Trying a test layout to see where I'm at for things like fences and sidewalks. It will be nice to deploy the street lights and newsstand, complete with paperboy, at last. The cloth is 4x4. 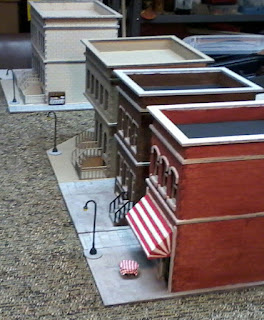 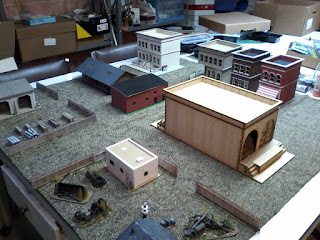 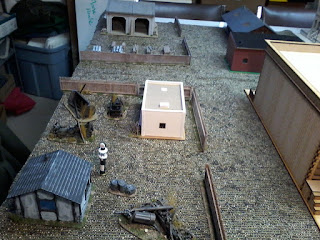 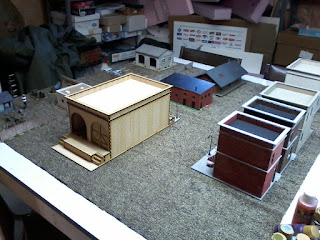 I can push the buildings right to the edge and leave wider streets too. But I had an idea to make walled yards complete with laundry behind the tenements. The reverse of the cloth is dark grey. Might be smarter to use that side and then make gravel yards for the construction company and the scrap yard. As you can see above I still have an empty corner to fill.


Hotlead hit a significant milestone this year, 25 years. There have been some bumps getting here, but for the most part it's been a hugely rewarding experience and I've made a lot of really great friends along the way.

I think that because the Hotlead team isn't really a club, but a group of friends who are all excited to see each other (for some of us it's the only time during the year), that makes Hotlead special. That feeling of friendship ripples out into the convention as a whole, setting us apart from other gaming cons. Many of our long time, regular attendees have also remarked on this over the years.

To celebrate we got in a cake and had a special figure to give away. The figure also commemorates this year's 75th Anniversary of the Battle of Normandy. Bob Murch of Pulp Figures very kindly donated sculpting and molding, only charging us for material costs and postage. Bob used to be a regular GM at Hotlead before he moved, selling his small line of figures from a case beside his super popular "China Station" games.

The Vendors have really changed over the years. Our longest attending vendor, Don Cameron of Five Arrows Figures and Books, who I think has been coming since the first Hotlead, couldn't make it this year due to failing health. Previously the vendors were all stores or part-time hobby businesses retailing figures and a few books, but with the age of internet sales, unless you're a manufacturer it's very hard to make a go of it now. Many of our old standard vendors are no longer in business. This year we had a lot of new Canadian manufacturers selling vinyl battlemats, laser cut mdf buildings, dice, 3D printed scenery and Model Builders Supply who sells to architectural model builders, rail road enthusiasts and now wargamers. The only miniature vendor we had was the venerable RAFM, who cast their own products.

The crowds were good, but this year we did some pre-registration for games, so the game sign ups went a lot faster. Elizabeth found the administration on the pre-registration pretty straight forward so we'll keep doing it. My big mental block on pre-registration had been taking advance payment, but once I got my head around not really needing that, it was all pretty simple to set up. There were a few glitches and a bit of whining, but lessons learned and you can't make everyone happy. 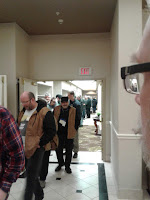 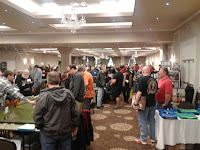 OK, now the games. Over the weekend we had 75 events ranging in size from Mike doing a foam core building workshop for 2 or 3 people, to the Middle Earth SBG tournament that had 24 gamers playing on 4 tables from Friday night to Saturday night. But we had air and naval games and land games in every period from ancient chariots to Star Wars and in all sizes from 6mm to 54mm. Every period was covered by at least one game except Colonials. 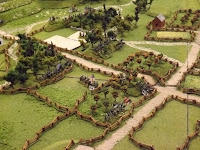 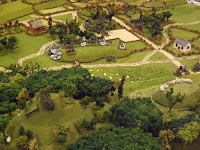 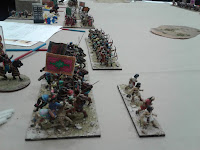 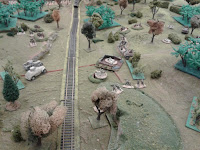 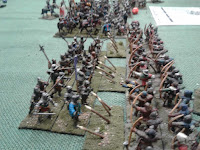 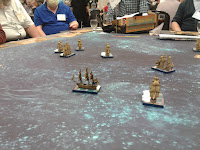 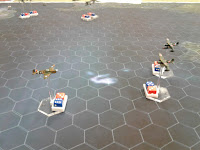 I notice certain games got photographed a lot by everyone who posted pictures to the Hotlead Facebook group.

Other views of Hotlead 2019 from the Web:
Must Contain Minis (lots of pictures of the VSF/Chthulu game)
The Mad Padre (some good pictures of Saturday night's huge 1:35th scale What A Tanker! game)

Well that I think is it for this year. A big thanks to all my friends who help out, all the GMs who pack their stuff and bring it to set up games just for us to put our grubby, clumsy paws on, and all the happy attendees who travel long distances, spend their money, have lots of fun and, I hope, reconnect with their friends like I do.

But mostly a huge thank you to my lovely Elizabeth, who is not a gamer, but does this to help me. Hotlead wouldn't be the same without her on the admission desk.