For the last few years, every convention, I've been bugging 6Squared Studio for their 15mm haystacks. They've always been sold out.

At Broadsword in August Kevin said "Send us a message a week before and we'll cast some up for you."

So I remembered a few days before Kegscon and ordered a dozen.

Here they are, all painted up with some 15mm sheep and Austrian Jaegers for scale. 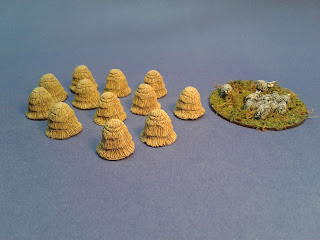 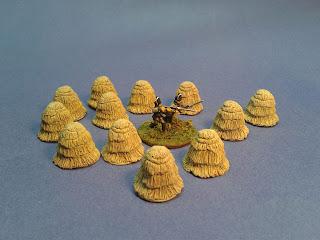 Expect to see these on all my 15mm WW2 and SYW battlefields now.

This picture reminds me I haven't had my SYW armies out for a few years. Might be time.
Posted by James at 1:14 PM 2 comments:

KEGSCON 2018- In Which Mr. & Mrs. Rabbitman Have a Romantic Getaway

This past weekend I think I achieved the impossible: I combined a weekend getaway with Mrs. Rabbitman while attending a wargame show!

This was possible because Kegscon is held in the delightful Retro Suites Hotel in Chatham. The accommodations are top drawer, so Mrs Rabbitman didn't mind lounging and working on her knitting while I pushed toy soldiers about. Plus the restaurant is very good, so splendid meals were eaten.

I took Friday off, so we were able to check in around 4:30 and settle in before dinner. Then she went upstairs to lounge and I got in 2 games. The first was "What a Tanker" with Brian, Thomas and Frank (the GM).

Frank's table and 1/48th scale tanks were very enjoyable. We did 2x M4 Shermans vs. 2x Pz IVs. I was trying to hunt Thomas and we chased each other around a stand of trees, then Brian brewed up Frank and hunted me. I ended up caught between the two and brewed up in spectacular fashion. 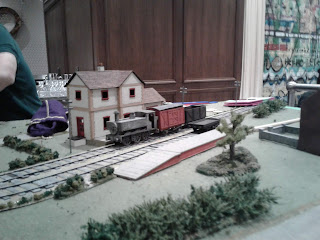 Then we got roped into a game of "Gaslands" the Mad Max/Death Race 2000 car wars game from Osprey. I went for speed and was heading for the 2nd gate when Keith set me on fire with a very unsporting flamethrower. I shot at Brian as I slid past out of control, then Keith flamed Brian and some one shot Keith, all of this resulting in a spectacular 3 car fireball blocking the second gate. But I was surprised at how fun it was trying to balance hazard with speed. Lubricated with more alcohol it would be even better.
The next morning after a hearty fry up, Mrs. went walkabout and I ran my game with three players. Same basic scenario but I added tanks (because I forgot the gunship at home). My friend Rico commanded the UNMC with considerable skill and held the FOB at games end. The new rocket launchers helped too, I think. 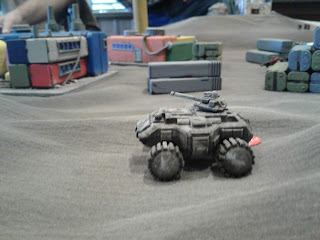 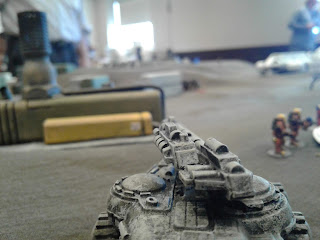 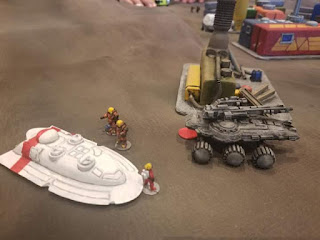 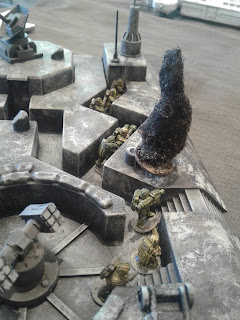 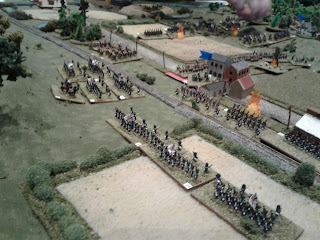 Then after lunch with Mrs Rabbitman  (a grilled bacon and brie with apple sandwich and fresh cut fries ) I got back to the show in time to play "Chain of Command " with Thomas' 20mm 1940 Blitzkreig toys. Rico and I took the French mainly because I find their Art Deco design tanks quite charming. We deployed into a village, contesting a vital cross roads with Les Boches. I thought I'd be clever and put a section out on the flank, but they attracted the fire of two sections in a house at the cross road and never got out of the turnip field. I sent in my platoon leader to rally them but the shock and casualties piled up, he got wounded and there were tears and recriminations.  But good fun playing a game I like a lot but get little chance to play and the German player Barnaby, who organizes the Broadsword game days, was a gracious opponent. 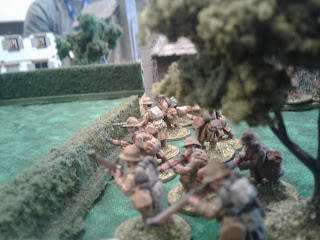 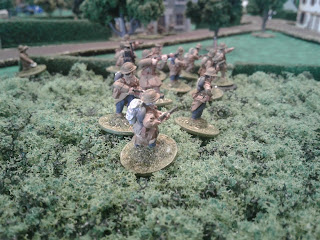 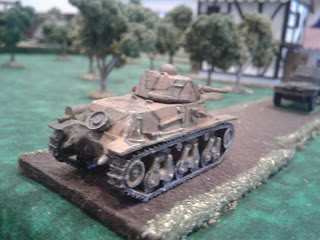 After that, Keith's wife Tam, Frank and his wife, Mrs Rabbitman and I, all went out for some great Indian food at a little hole in the wall place.

I talked to some of the guys on returning but except for the Hobbit SBG tournament there wasn't much going on so it was up to the room to unwind and watch some TV.

The next morning was check out and meeting Keith and Tam for brunch at another great restaurant, then a leisurely drive home, stopping at a deli we like in London. Home and tea by 3:30.

All that rich eating played havoc but well worth it.
Posted by James at 7:24 AM 1 comment: