Saturday morning saw me up bright and early for the 2 hr drive into deepest, darkest southern Ontario to attend KEGSCON in Chatham, hosted by the Kent-Essex Gaming Society, who are spread from Windsor to London, actually. 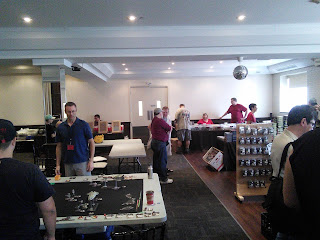 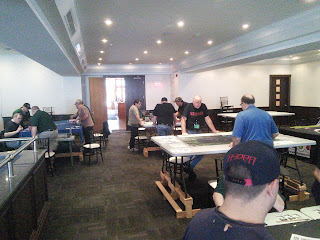 Small convention. Nice room in a nice hotel, so bar, food and accommodations all on site. Friday night Brian ran a Waterloo campaign game which I  didn't get to, but it sounded fun. Five dealers and about 12 games on Saturday. Some games went unplayed unfortunately, but I could only be at one table at any one time! But a good gang of guys so fun was had.

I was a bit late having missed my turn and seeing parts of Chatham I didn't want to. So I got there and was soon seated at a game of X-Wing run by my friend Scott R. I hadn't really played it before, but several of my friends do, so I thought I should give it a try.

The Rebel force is trying to cover a transport that has to escape the Imperial Raider and attendant fighters. I am running the X-Wings, B-Wings and the Millennium Falcon in the foreground. So I have both Han and Luke, plus a few other named "hot sticks." 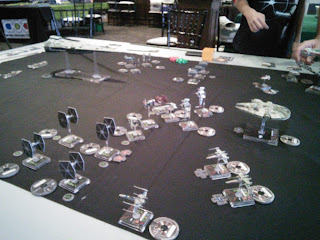 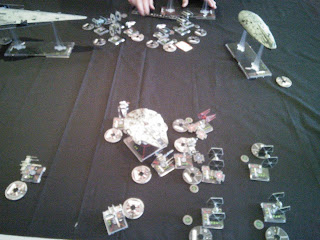 I focused on the Imperial aces in the red advanced Tie fighters before shooting up the basic Tie fighters with level 1 no name pilots, who ducked and wove and dodged many devastating volleys to my great annoyance. They kept their box formation admirably until the last turn when I shot two down finally.

This didn't help us as the Raider cut the transport in half. But my partner did blow up Darth Vader to gain a moral victory. I only lost two fighters and really took a liking to the unglamorous B-Wings that handed out a lot of hurt. 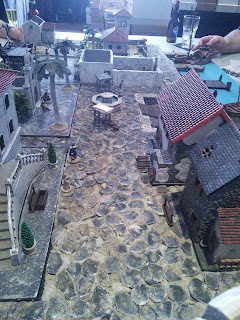 After lunch and a bit of browsing the vendors, it was time to try Brian's 6mm Franco-Prussian War game. We refought Mars-la-Tour using "Bloody Big Battles". Barry and I ran the Prussians. I quickly grabbed the two towns we needed to hold to block the French advance while Barry distracted a lot of their left wing. 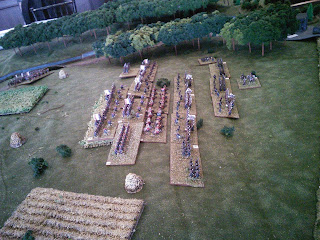 Interesting game with a lot of similarities to Fire and Fury. The French were frustrated with having lots of troops, but only one command stand and an additional negative for command rolls, so they didn't move very much. The Prussians had to scramble to rush troops to the objectives. I kept trying to build a massed battery in the centre, but kept having to withdraw guns as they ran out of ammo. So of my four batteries I only had two at any given time.

I only did a bit of shopping and visiting. I bought 2 resin haystacks from 6 Squared Studio and some air support for my modern Canadians thanks to Don H. who spotted the  Apache kit and pointed it out to me during my X-Wing game. It was in a box of stuff at the perpetual travelling "Crossed Swords" clearance sale. The dealer closed his store a couple of years ago and is dragging his stock around to the local shows to play "Let's make a deal!" I got the Apache for ten bucks. 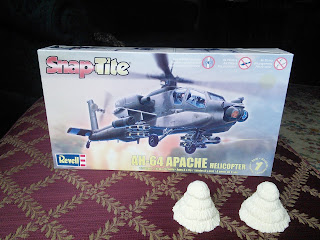 I also had an interesting chat with a recently retired RCR warrant officer, who was explaining some details of modern section tactics with LAVs and the smaller, firepower heavy infantry sections.

Another good chat with Brian as he packed up Mars-la-Tour and then it was time to head home, stopping at a highway Tim Horton's for dinner and getting home a little after 10 PM.
Posted by James at 3:00 PM 6 comments:

Last night I cleaned off my messy table and Patrick and Mikey came over to put my Afghanistan toys through their first game. Since Fighting Season isn't out yet we used the free to download FUBAR rules and their modern Afghanistan notes.

I set up a table, utilising all my finished terrain except the ANP strongpoints.

The lengths of wood demarcate the table edges. I think I need a few more buildings, lots more walls and pot fields. But once the grape huts and fields are done that will fill things in nicely as well.

Patrick was the ISAF commander with Mikey assisting. I decided to run the Taliban since I was making up the scenario on the spur of the moment and to make it easier to keep some Fog of War. I let Patrick come in from any table edge and his mission was to search the village for a bomb factory. Patrick rolled in mounted from the road entering by the ditch on the lower edge of the picture.
I should have made my dispositions and planted some IEDs before Patrick declared his entry point.  I totally forgot about IEDs until after they were on table, so I left them out. Maybe they failed to go off. But the IED threat did influence Patrick's manoeuvring. 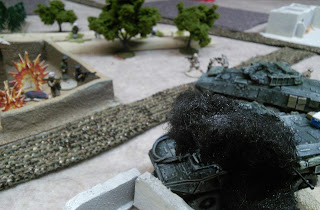 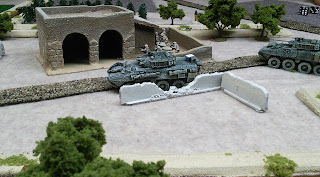 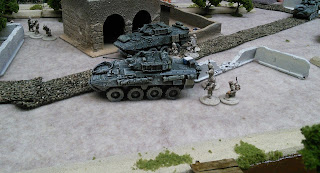 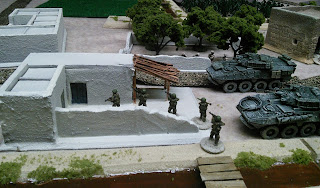 I had one trick left up my sleeve, a second suicide bomber in the bomb factory. But after he failed to activate three times and missed his chance to get in the middle of a fireteam covered in suppression markers, I decided that he had chosen surrender over martyrdom.

Halfway through the game I realised I'd also forgotten about my Taliban sniper, who would've been perfect in the HMG position and the HMG would've been good over the bomb factory building to tighten the kill zone the Canadians rolled into.

Coalition casualties were extremely light. Those 5+ saves for the body armour kept saving Patrick's troops. The ANA lost one man crossing the ditch, but fire from the LAVs got them on to the Taliban positions without taking more hits.

So the takeaway from last night was that the FUBAR rules are pretty fun, I need more terrain and more Taliban (or I could recycle casualties), LAVs put down a lot of fire and the ANA are pretty useful once you can get them activated. So more ANA too. I should introduce some less useful ANP allies in another game!

The jangling of the telephone broke my slumbers this AM.
It was Pasha Dan on the line.
He was taking his Mrs to a quilt show in nearby St. Mary's and googled hobby stores to find something to do while he waited for her.
Remember back in May I mourned the closure of my childhood hobby shop, McCormick's Hobby Centre? The place that sold me 100s or possibly 1000s of Airfix soldiers?
Well, they didn't close! They just moved closer! Google Maps has them an easy 24 minutes from me now instead of a harried hour into a busy part of London Ontario.
Possibly the best news to be woken up with ever.

Compounding the Compounds and Grappling With Grape Huts Some More!

Lots of progress in the last two weeks.

Put the finishing touches on the four compounds I started. Over the gritty pink glitter paint went a coat of  chocolate brown latex paint. I then used khaki and ivory spray paint to over coat that and try and give some depth, although better control and a lighter touch with the ivory would have been better.

Wooden posts, thatch and doors were then painted. I used brown inks on the posts and thatch. Blue doors seem pretty common in Afghanistan so I did them in a pale blue with blue grey highlight.

To give them the look that these are actually someone's home I added stuff to the court yards. Someone, maybe Mikey or probably Pasha Dan, gave me a sprue of 1/72nd scale accessories; two bicycles and some picks and shovels. To these I added some tires and an oil drum from my bits box and made wood piles and a stack of lumber out of off cuts. I'm thinking these are farmers, and the farms around here have all kinds of clutter, so why should they be different? 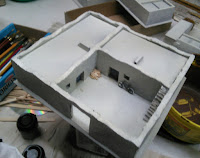 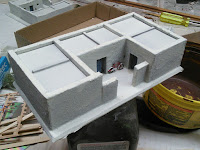 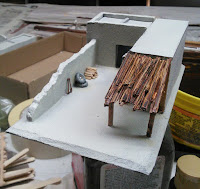 I also made a breakthrough with the grape huts yesterday.

I've decided that the one I started is too big. So I tried using some fiber board and drilling pilot holes with my dremel tool and then cutting the vents. 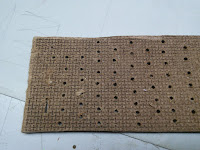 Yeah, that didn't work so great.

But then I had the idea to punch the vents into foam core. I tried a few different ideas and then had success by sharpening the end of a piece of scrape plastic and pre-cutting "I" shaped slits for each vent. 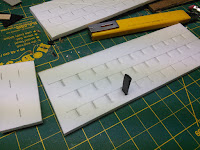 Last night I cut out, cut the vents and assembled two grape huts. 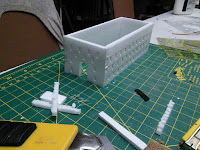 Tonight I started on the thatch roofs by building the rafters to attach the thatch to so that the roofs would be removable. I notched the short ends to take the main beams which are cut from bamboo skewers. 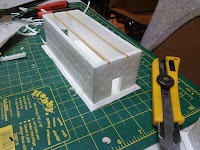 I then cut cross beams and glued them in place with epoxy. I could use PVA or superglue, but the rest of the roof is going to be grass, so I want them strong so they can withstand play. 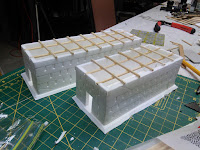 Now all this activity in the last few weeks has left my gaming table/terrain work bench a bit of a mess! 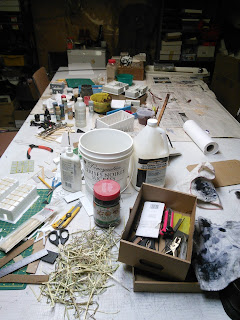