While ruminating at work last night I realized that I have an awful number of tabs open on my Google app as I've been cycling through various manufacturers websites resisting the urge to buy.

I haven't bought anything since November, which is pretty good. But since then I've pondered something like EIGHT or NINE expansions to current projects or entirely new projects;


Some are quite modest additions to current projects, but I ask myself "Do I really need an Afghan goatherd or a second platoon of Canadians for the Panjwayi?" or "Do I need a big addition to the Lead Pile (Dwarves or Rohirrim or French or Poles)?" or "Do I really need a whole new distraction before I've finished something else (Centurion tanks or RAF Spitfires vs. Me109s)?"

Each jump is caused by seeing some nice eye candy in my Social Media feeds. A good castle model has me thinking Dragon Rampant. Someone's Chain of Command post gets me thinking about 1940s French etc.So I keep cycling through the webstores, kicking the tires, planning buy lists and checking the currency rates. I just hope Brexit doesn't cause a big jump in prices from British manufacturers having to pay more for metal before I decide I've cleared off enough of the lead pile and can add to it guilt free.

In the meantime I'll keep cycling though them and try to white knuckle hang on until Hotlead and see what I find there. Which really, is time I could be spending more productively doing something else.
Posted by James at 11:46 AM 1 comment: 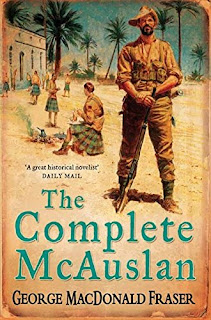 I think most of you are familiar with George MacDonald Fraser's Flashman books. If you aren't, then where have you been hiding? Go read them. Now.

During WW2 GMF served as an infantryman in the 17th Indian Division ("the Black Cats"), part of the 14th Army in India, Burma and Malaya. He describes this experience in his war memoir Quartered Safe Out Here, which is one of the best war memoirs I've ever read. You should go read it. Now. After reaching the dizzying heights of Lance Corporal he was selected for Officers training. By the time he was commissioned, the war was over and he joined his regiment, the Gordon Highlanders doing occupation duty in Libya.

His experiences as a young 2Lt and then Lt, learning how to command a platoon of battle hardened, canny Jocks is what he turned into the short stories featuring Pvt. J MacAuslan "the dirtiest soldier in the world." These stories are a wonderful glimpse of a lost time and world, as the British army was consciously transforming itself from fighting a world war and being an Imperial policeman to something new and strange in the post-Imperial, Cold War world. He commands a troop train in Palestine, worried about Jewish terrorists. He finds himself facing an angry Libyan mob, uncomfortably aware that it's him (a young Lt) and his 30 Jocks with their Enfield rifles standing between the quiet city and an orgy of burning, looting and rape. He has to mount Ceremonial Guard at Edinburgh Castle in front of VIPs and Royalty, only to have one of his kilt straps break mid parade. There is a tense golf tournament with regimental honour at stake and the Walking Disaster, MacAuslan caddying for the RSM. As Battalion Sports Officer he finds himself managing the football team, who know football better than he. He worries he isn't being accepted by the Jocks, when he discovers they have an affectionate nick name for him and think he's 'canny'. A lot of the worries and burdens of a subaltern are portrayed here, which would make the book useful reading for any junior officer. GMF originally presented these stories as fiction, because some of the characters were composites and some of the events didn't happen exactly as told. But as he admits in the Afterword, describing a meeting and drinks with his old CO, there's a lot of truth in the stories, even the unlikely character of MacAuslan.

MacAuslan often, through dumb luck, ends up a bit of a hero. Even though he's filthy, can't march and his kit is in permanent disarray, MacNeil and the platoon have a soft spot for him too. Because even though they have to hide his kit in a closet and get MacAuslan out of garrison during any major inspection, he tries hard and has the North Africa medal (if he can find it) and advanced with rusty bayonet against Rommel at Alamein and Tobruk, and to MacNeil (and GMF) that deserves some consideration.

The story in which MacNeil and MacAuslan are demobilized is quite touching, showing the strange affection between them. It reminded me of my own 'MacAuslan's'. Cadets who can't march, can't keep their uniform clean or tucked in, often late. But they keep cheerfully trying. You get exasperated and yell, you chide, you nag. But for some reason they like you, remembering the times you were considerate and patient, even when you can't. And sometimes they surprise you too. After they've given their final awkward salute and bear marched away, you can't help but wonder how they'll get on. Even though they aren't your responsibility any longer, the bond, and the worry that comes with it, is still there.
Posted by James at 11:23 PM 5 comments: